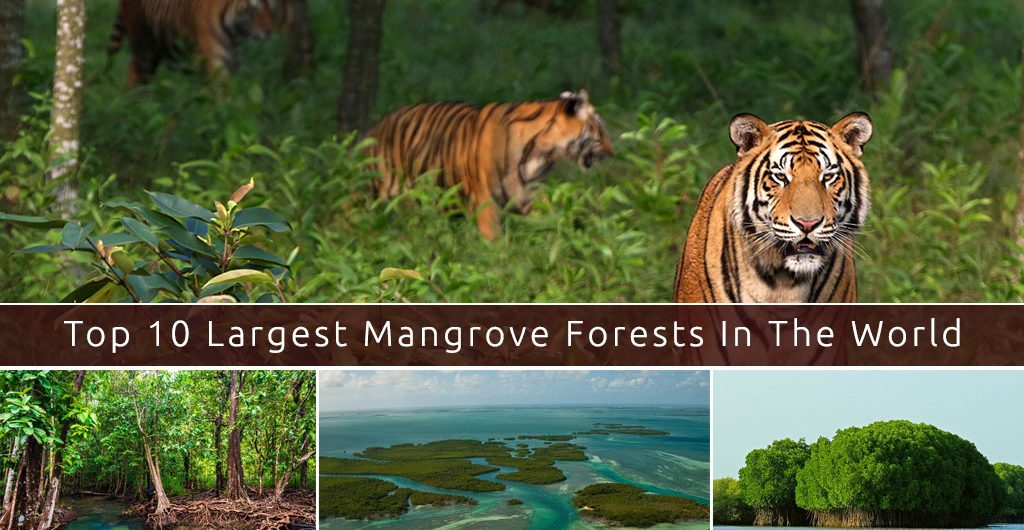 To begin with, what is the Mangrove forest? In general, where grow various kinds of small and medium trees – especially in coastal saline or brackish water are defined as the mangrove forest. According to the statistics of 2000, the total mangrove forest in the world covering 137,800 square kilometers. It has covered about 118 countries and territories. This is a type of Coastal forest. To explain, the forest which is temporarily submerged in saltwater tidal waters; where the water rises during the tide and when the water flows down.

To clarify, why Mangrove forest matters and what is the benefits of it? In particular, it is very important for the ecosystem. On the other hand, it protects the coastal area from severe storm or cyclone.  Another key point, Mangrove forest is the heaven of critical habitats animals. Equally important, it is the storing area of a vast amount of carbon. At the same time, it prevents erosion from the coastal region. And it creates a lot of opportunities for livelihood. The warning for the human being, the areas of mangrove forest are decreasing and we are also wasting the resources. It is the time to make the people conscious with necessary steps.

Let’s see the top 10 list of Mangrove Forrest in the world with some necessary information.

Sundarbans is the largest mangrove forest in the world. The total area is nearly 10,000 km2. In addition, it is at the side of Ganges, Brahmaputra and Meghna Rivers in the Bay of Bengal. The area of Bangladesh part is 6,017 km2. The most plentiful of trees are Sundri and Gewa. At the same time, it is the home of Royal Bengal Tigers. Notably, UNESCO has declared Sundarbans as the world heritage site. A point often overlooked, the place is now very popular for ecotourism.

Pichavaram is the second largest Mangrove Forest in the world. It located in Tamil Nadu, India. Generally, the total area of this forest is 2800 acres. A sand bar of Bay Of Bengal has divided it. To emphasize, the forest is the home of water snakes, water dogs, foxes, turtles, prawns, crustaceans, oyster, and waterfowl. Identically, you will also find 200 species of birds. It is also the place of some rare species like Avicennia and Rhizophora.

In the United States, Florida consists of the largest mangrove forest. It is nearly 2700 acres. To be sure, it is the most protected mangrove forests in the world. Any illegal destruction of the forests is extremely prohibited. Among 10 known’s mangrove species, the red, black and white mangroves are seen most. In the Florida mangroves, it consists of 220 fish and 181 bird species. Certainly, the animals including bears, wildcats, pumas, and rats are safe here also. It consists of 24 reptile and amphibian species. As like alligators, crocodiles, and turtles.

Bahia mangrove is located in Northeastern Brazil. It is figured as the South American Atlantic Forest biome. The area is nearly 2,100 square kilometers (800 square miles) including land-water area. The species of trees are mainly from Atlantic Ocean tropical mangrove species (Red, Black, and White Mangrove family). Even though the forest is currently facing a conservation threat. In the forest area, it prevails the tropical climate with heavy rainfall. Indeed, the rare mammals are found here including the maned three-toed sloth and golden-headed lion tamarin. The place is popular for tourist destination as well.

Godavari-Krishna mangrove is located in the Krishna–Gundur District in Andhra Pradesh. The total area of Mangrove in this forest is 194.81 sq. km. among 7000 km2 of the island.  It is a forest which is in threat for framing and seaside urbanization. The trees species consist of Avicennia marina, Suaeda spp., Rhizophora spp., and Bruguiera spp. Other coastal habitats including saltwater crocodiles, insects, mollusks, shrimp, crabs, and fish. It consists of 140 species of birds and some endangered including egrets, flamingoes.

Sell Also: Top Waterfalls in Bangladesh and In The World

Gulf of Panama mangroves is located at the side of Bay of San Miguel in the Pacific coast of Panama, Colombia. Besides, the total area of this forest is 2,330 sq. km. (900 sq mi). In general, it is heavy rainfall area though it prevails dry season from January to April. Important to realize, the effects of deforestation and agriculture are affecting the mangroves area. Especially, river erosion is increasing intensively. Not to mention, many families here are depending on the income source depending on the mangroves. So, the natural behavior of the coastal area is decreasing day by day.

Indus River Delta is located at the shore of Indus River and the Arabian Sea. The mangrove flows from the Indo-Pacific region. This mangrove is the source of freshwater, the supply of oxygen and living numerous species of critical habitat. The area is nearly 2,200 square miles. The forest is rich with various types of fish, birds, and dolphin. For example, Giant Snakehead, Indus Baril, Indus Garua, and Rita catfish. Likewise, the dolphin is familiar as the freshwater dolphin and mentioned as Indus river dolphin (Platanista minor). In this area,  excessive use of insecticides for irrigation and dams in the river are making the habitat life critical.

Belizean Coast mangrove is located at Amatique Bay in Guatemala along with the cost Belize. The total area is nearly 2850 km2. It is under conservation of the World Wildlife Fund. The forest is a great shelter for some endangered species of fish and birds. Some habitats including Egret,  Cattle Egret, and Boat-Billed Herons are living in this coast mangroves. This is the place of some endangered species including anhinga, neotropical cormorant, and white ibis. Greater Antilles mangrove is located between Cuba proper and Isla de la Juventud. Isla de la Juventud is the second largest island in Cuba and 7th largest in the West Indies. The total area of the island is 3,540.56 km2. Among the area, the mangrove forest is 2,200 square miles. Markedly, it has got the status of Critical/Endangered mangrove forest. The animal species in the forest consists of Cuban crocodile, Cuban Rock Iguana, the Cuban hutias, etc. There are 4 types of tree species including Rhizophora mangle, Avicennia Germinans, Laguncularia racemosa. and Conocarpus erectus.

Manabi mangrove is located in Ecuador at the side of the Pacific coast. The area is nearly 1,000 km2. For shrimp firm and urbanization, the mangrove forest is in the endangered list. Hopefully, illegal activities are banned now. The Manabi Mangrove is in the shore of Muisne River. Among the mangrove trees, it consists of Avicennia germinans, Rhizophora mangle, and Rhizophora harrisonii. At the same time, it has some rare types of mangrove trees. It is the home of shrimp, numerous birds, and fish.

Important to realize, there are some other mangrove forests. You can get the complete list according to the region from here. Let’s point out some of the mangrove forest lists from other countries.

With attention to, Mangrove forest maintains the proper balance of the ecosystem. On the other hand, it is a great place for fish production and reservation. For protecting the coastal areas and preventing erosion or storm, it is the safety for the human being. For this reason, it is our duty to work for preserving the mangrove forests. With this in mind, let’s start to enrich consciousness in all the place of the world. If the forest and nature grow accurately among the world, the human being can live well. So, it is not only our duty, it is our responsibility.

Shahzad Ahme Malik
Reply
Indus River Delta Mangroves are located in Pakistan.. why u did not mention Country Name??

Staff Editor
Reply
Thanks for your valuable information. We just tried to mention top mangrove forest in the world and we will update the info. Hope the readers will consider the mentioned mangrove areas. :)

Sylvia
Reply
You can not write on top ten largest mangroves in the world and exclude the third largest, The Niger Delta wetlands located in Nigeria.It taints the authenticity of the information on your blog..

Sylvia
Reply
You can not write on the "Top Mangrove Forests in the world" and exclude the third largest, The Niger Delta wetlands located in Nigeria, Africa. It taints the authenticity of the information on your blog. Update your content.

Sanjit
Reply
Excellent observation skills, Niger Delta,”, is as big as the whole of the Bangladeshi subcontinent, and of course half of the Amazon forest is still reliant on, it’s vast waterways.