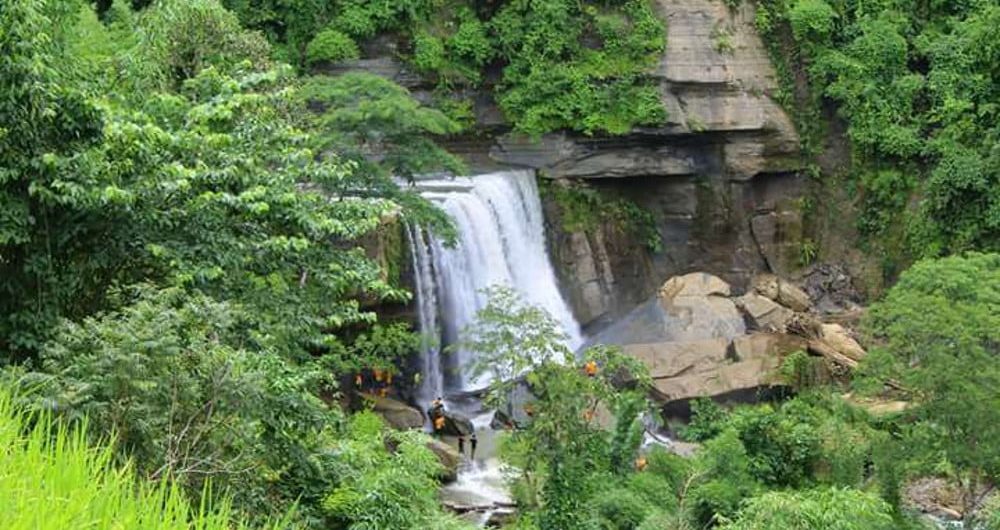 Due to its remote location, Tinap Saitar has not yet gained much recognition among tourists. However, those who have visited this waterfall along its difficult road have been fascinated by its unparalleled beauty.

This naturally created waterfall is very different from other waterfalls. Its water is clear and cold-hot throughout the year. During the monsoon season, water flow increases in Tinap Saitar. The water of this waterfall falls into the Paindu canal from about one and a half feet above. Everyone is fascinated to see the water falling from the winding path. Another interesting thing is that the rainbow can be seen here in the sunlight during the day.

How To Go To Tinap Saitar

After reaching Bandarban, you have to get off the bus and take a local bus from Roangchhari bus stand to Roangchhari. From there you have to walk 23 km to Ronin Para with a guide. The next day 4/5 hours walk from Ronin Para at night (walking time may be more or less depending on the speed and stamina) crossing the Paindu canal and mountain, suddenly it appears in front of your eyes, Yes, in a strange love, in a strange intoxicating, it is Tinap Saitar.

Dhaka Or Chittagong To Bandarban

You can also go to Bandarban from Chittagong. Pubali and Purbani Paribahan buses run from Baddarhat to Bandarban. These buses will cost you Tk 220 per person.

You can contact Travel Mate for Bandarban Tinap Saitar Tour Packages, Hotels, Bus Tickets, Air Tickets or any corporate or event or family trip. or Call +88 01766-99-0725.

You have to take Tomtom to reach Roangchhari bus stand Bandarban. It will take BDT 15 only. The bus from Roangchhari leaves for one hour in a row, so you will get a chance to freshen up by washing your hands and face in Bandarban. After that you will go to Roangchhari with a rent of 60 Taka per person. It will take an hour and a half to reach. However, if you want, you can also reserve Mahendra from the front of Hotel Hillview. The cost will be between 1000-1200. If it is a team of 12 to 14 people, Mahendra is a very nice vehicle. It will take about an hour.

After landing in Roangchhari, you need to discuss staying days with the guide and buy useful rice, pulses, spices, chicken, eggs whatever you want. If you say before, the guide can buy the essential things in advance. You will find good grip sandals from Roangchhari market. The price will be around 150 Taka per pair. There is a hotel called Radhaman, you can rest for an hour if you feel tired. After resting, your next destination will be Roninpara.

There are two ways to reach Roninpara. You can go to by Moon Car (Chander Gari) or on foot. If you reserve a car, the cost will be around 4000-5500 BDT. In two to two and a half hours it will take you down a steep hill. You have to walk for an hour from there. And if you are very tolerant and if your mind is happy to see the mountains, then get down from Roangchhari on the road. You have to walk along the hill rhyme next to Roangchhari town for a while. After that it will take at least six to seven hours to reach Roninpara after going up and down. If you are a nature lover, you will enjoy it in the beginning. Sometimes you will see the steep hills on the side rising far away, sometimes you will see rows of hills playing with wide waves from both sides, and sometimes you will have to walk along the narrow road in the middle of the forest of Thasbunot.

After arriving at Roninpara and prepare to take rest. The guide will do everything for you. He will arrange your living place, bath and food. Most of the people of Roninpara are of Bam caste. Besides, several Thanchangyas also live here. There is also a tea shop, there is a water supply. Roninpara is a paradise compared to the surrounding remote areas. From here you can charge mobile or camera, the electronic device you have. Some houses have lighting system for the benefit of solar power. After reaching Roninpara, one has to go to the army camp and report here. However, if you tell your guide in advance, he will do everything for you in advance. We have to start our journey on the way to Tinap very early the next day. So it is better to try to fall asleep as soon as possible after reaching Roninpara.

If you want to go from Roninpara to Tinap Saitar, try to start the journey as early as possible in the morning. Tinap Saitar is located at a distance of 13 km from Roninpara. It will take about four hours to go. It is very difficult to walk in the mountains on a full stomach. So it is better to eat something light. Don’t worry about bag-tags! Take only water and other necessities. You can reach Debachharapara after walking for an hour and a half from Roninpara. If you want, you can bring noodles or something like soup and cook here. 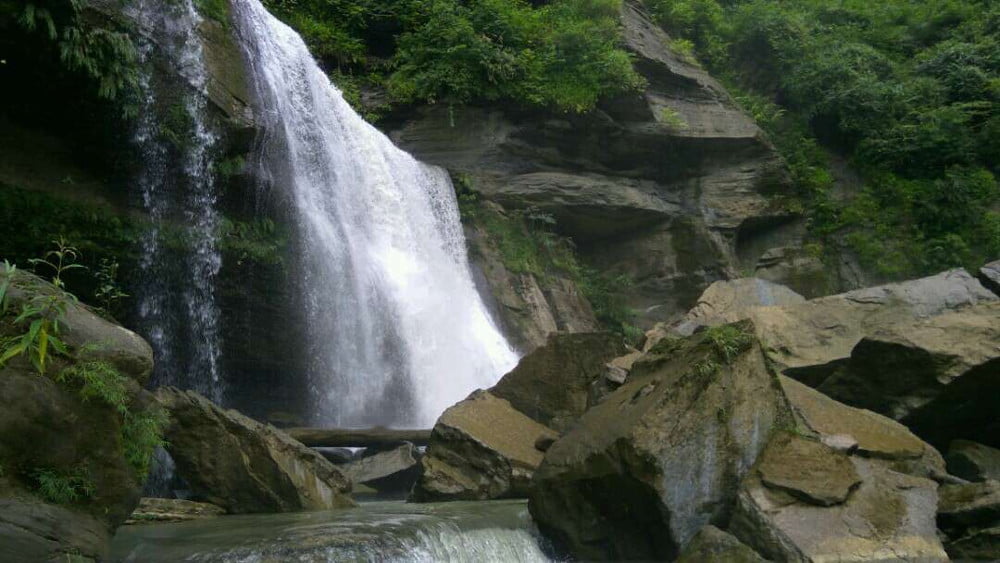 From Debachhara Para you have to go down to the hills. This road is nice. Forested hills on both sides, occasionally you will see lizards (Goyal). These are hybrids of wild cows and domesticated cows. If you keep your eyes open, snakes or crabs can also fall in your eyes. But be careful. The rocks you walk on are very slippery for the sake of water and algae. It is not strange to break arms and legs while playing in problematic.

You have to climb a lot of hills to get out on the right places. The roads here are difficult, but not dangerous. As you walk, you will see the huge Paindu canal from the top of the hill. There is a steep hill road before Paindu canal, it is better to go down a little carefully while descending through it.

You can also go through the Paindu canal of Tinap Saitar, or you can go through the hills in a detour. The road of Paindu canal is more beautiful and the danger is a bit higher. In some places of the canal there are strong currents. If the guide is skilled, of course, you will easily get through these. However, it is better not to go through Paindu canal during monsoon season. Of course not if you don’t know how to swim.

But whichever way you go, the roar of the water will come to your ears as soon as you reach near Tinap. Then what, you will see the huge waterfall in front. There are huge stones all around and trees floating in the current. And the steep wooded hills on both sides have risen hundreds of feet. Climb up any rock, or go to the bottom of the waterfall and take a cold bath. The body will cover the mind. There is no greater tonic to forget all the fatigue of the journey. If you see it with your own eyes, you will understand why Tinap is called the biggest waterfall in Bangladesh even though there is no official announcement! Take a bath in the water of the waterfall, rest and take the road back. After seeing such a beautiful waterfall, there should be no more physical pain to return.

Travel guide on Satvaikhum and Nilachal.

Traveling through Ruma Upazila of Bandarban to Tinap is much easier and takes less time. Reaching Bandarban from Dhaka by bus or by car to Ruma Upazila. With permission from Ruma, you have to go to Attapara by moon car (Chander Gari), the fare is approximately 2200-2500 Taka, going and coming is 5000 Taka. There is accommodation in Attapara, the cost of accommodation is approximately 100-150 Taka. From here you have to report to BGB camp. The next day you can trek for two hours with a guide to see Tinap Saitara. On this trek you will see several small jhiri and fountains. On the way back, you can return to Bandarban by moon car from Attapara. The car fare from Attapara to Bandarban Chander is 5000 Taka. 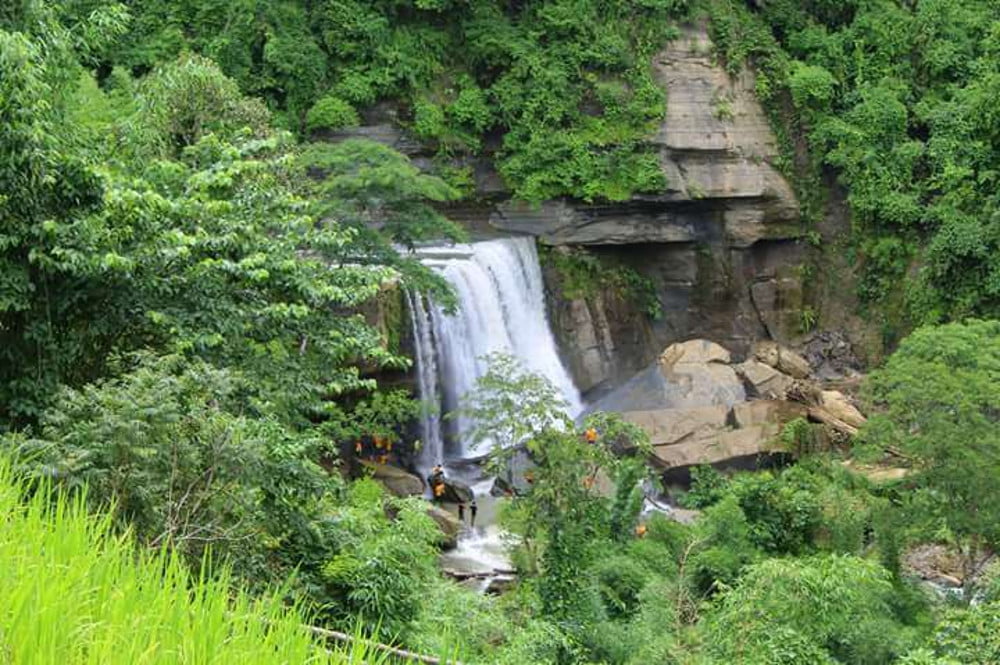 Where To Stay At Tinap Saitar

There is a hotel named Radhaman in Roangchhari apart from Bandarban. The room will be rented for 150-200 Taka per hour. You can also spend the night here if you want. AC room will cost 1500 Taka and non AC room will cost 500 Taka. In addition to Radhaman you will find several hotels with the same facilities at almost the same cost. Apart from this, there are arrangements to stay in the houses of the tribals of Ronin Para which will be arranged by the guide.

Where To Eat At Tinap Saitar

There are food hotels in Bandarban town, Roangchhari and Ruma Bazar. On the other hand, if you stay at the house of Indigenous people in the mountains, they will arrange everything to support you. If you go in a team and want to cook in the hills, you have to take oil, spices, potatoes and onions. There are all the ways which is supportive for you do it accordingly.

How Much Does It Cost To Reach The Fountain

One thing to keep in mind, the cost mentioned here is just an idea. This cost can be calculated more or less due to many reasons. In addition, there are some small expenses that are not covered by this calculation. When planning your tour, keep these in mind and calculate the cost.

Tips When Traveling This Largest Waterfall In Bangladesh

You have to talk to the guide from Dhaka. The cost of the guide is at least 1000 Taka per day, the rest depends on the situation. Along with this you have to pay 150 Taka per night for staying in Roninpara and also for cooking, wood cost etc. You can also take the guide with you to the market, or the guide himself can do it in advance. This place is not yet popular as a tourist spot. So the guide will not try to cut your throat, you can be sure about that. As human beings, everyone here is very hospitable and honest. So it is better not to go for bargaining. 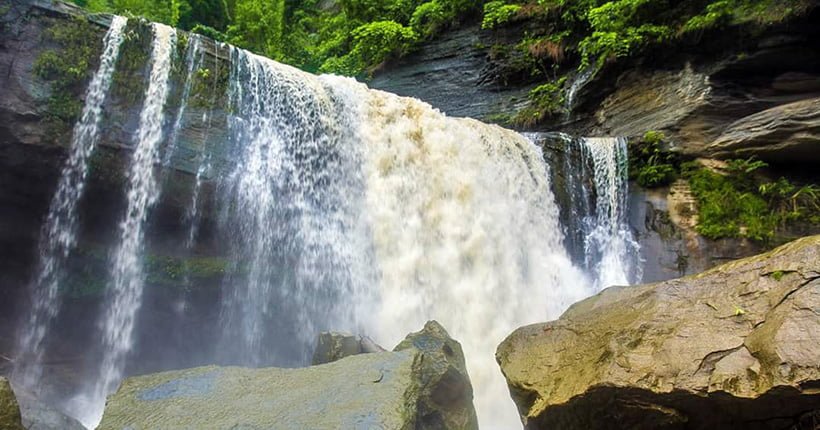 Take things with you

You can contact Travel Mate for Bandarban Tinap Saitar Tour Packages, Hotels, Bus Tickets, Air Tickets or any corporate or event or family trip. or Call +88 01766-99-0725.

Tinap Saitar is a perfect place for a group or family tour. The beauty of this place will give you awesome feelings. At the same time, you can come back within two or three days by visiting here. Hopefully, you can go to Tinap Saitar within a tight budget. If you want to travel Tinap Saitar Of Bandarban (Bangladesh) with safety and want to enjoy the place with more joy, Travel Mate can help you with arranging the tour. Contact us for further details. Above all, you may add any missing information from the comment section. Happy Traveling. ♥