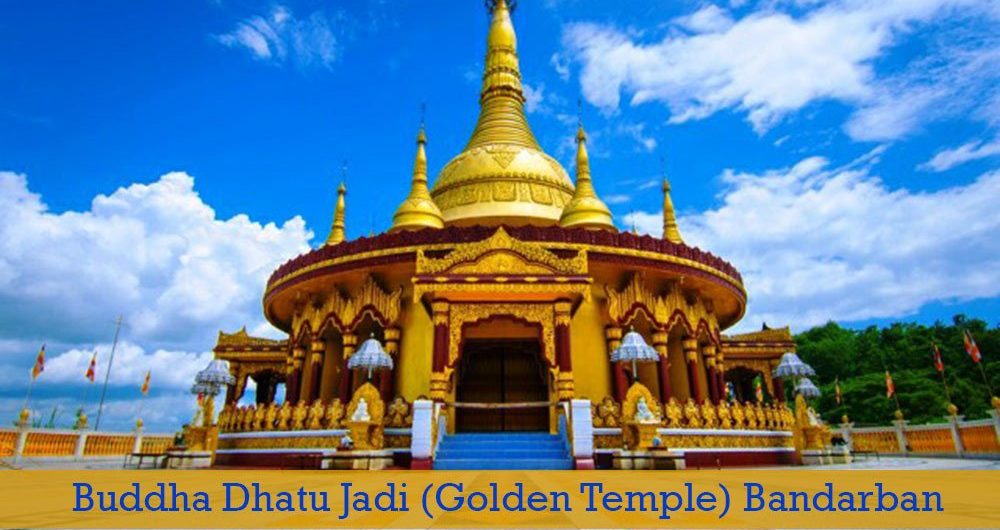 The Buddha Dhatu Jadi temple, one of the Buddhist shrines in Bandarban, attracts a lot of tourists throughout the year. The temple is better known as the Golden Temple. The holy place of Bandarban for the Buddhist people is the Golden Temple. This temple is situated on the top of a high hill in Balaghata area, nine kilometers away from Bandarban city, a green land of natural beauty.

The construction work of this temple of U Pannya Jota Mahathera for the local Marmas started in 1995. Construction of the Hinayana Buddhist Temple, the largest in South Asia, was completed in 2004. To the Buddhist (metal) community, the Buddha Dhatu Jadi Temple is considered a sacred place and a place of worship. This unique temple made of wood by Myanmar artisans has the second largest Buddha statue in Bangladesh.

With a nominal entrance fee, visitors can see the architecture and its scenic views. The gate of the temple, the surrounding railings and the ground are covered with gold-colored artefacts and murals. The dome at the top of the temple has also been decorated in various forms. Twelve Buddhist statues of various shapes outside the main temple add to the overall aesthetics. The various ‘coins’ emblazoned on each statue have been used as symbols of the teachings of Buddhism.

The temple is located at an altitude of about ,600 feet above sea level. No tourist is allowed to enter the temple after 7 pm except for worship or religious rituals. The fair is held at the temple premises at the end of January and the beginning of February every year. Thousands of earthen lamps are lit in the temple to commemorate the Buddha on the night of the full moon. Compared to the early years of construction, a large number of tourists now visit the temple. But locals say the influx of extra tourists has now become a concern for the temple. Because, many tourists do not respect this holy place.

You can contact Travel Mate for Bandarban Golden Temple Tour Packages, Hotels, Bus Tickets, Air Tickets or any corporate or event or family trip. or Call +88 01766-99-0725

Buddha Dhatu Jadi Golden Temple is located at Pool Para in Balaghata, a suburb of Bandarban, is known as Mahasukh Mandir or Buddhist Dhatu Jadi. Although the name is Golden Temple, there are no gods and goddesses made of gold. It is now known as the Golden Temple for its golden color. Its distance from Bandarban district headquarters is 4 kilometers, nine kilometers away from Bandarban city. A beautiful pagoda built on the top of a high mountain. It is a holy place of pilgrimage for Buddhists. Many Buddhists from home and abroad come here to see and pray. 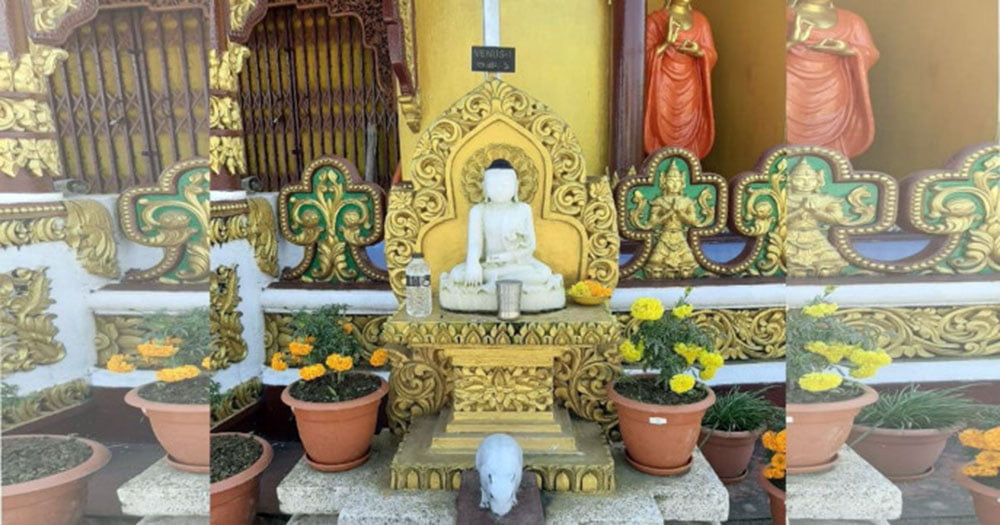 Buddha Dhatu Jadi, one of the largest in Bangladesh and one of the largest in South Asia, has been dubbed the Golden Temple. Here are some of the best Buddha statues in the world built in the contemporary of Gautama Buddha. It was built at a cost of about 10 crore Taka. This pagoda is one of the best in Southeast Asia. On this high hill there is a small pond with water called Devata pond. At present, the Golden Temple shrine is considered as one of the tourist spots in Bandarban district. It is a significant place of worship for Buddhists. It is modeled after Buddhist temples in Myanmar, China and Thailand. On a trip to Bandarban, you can also see this Jadi or Golden Temple with your own eyes.

This pagoda offers a beautiful view of the Balaghata suburb of Bandarban and its surroundings. Apart from this, Bandarban radio station, Bandarban Chandraghona rural path and scenic beauties. This pagoda is an example of modern religious architecture. The fair is held here at a specific time every year.

Time To Visit Of Golden Temple 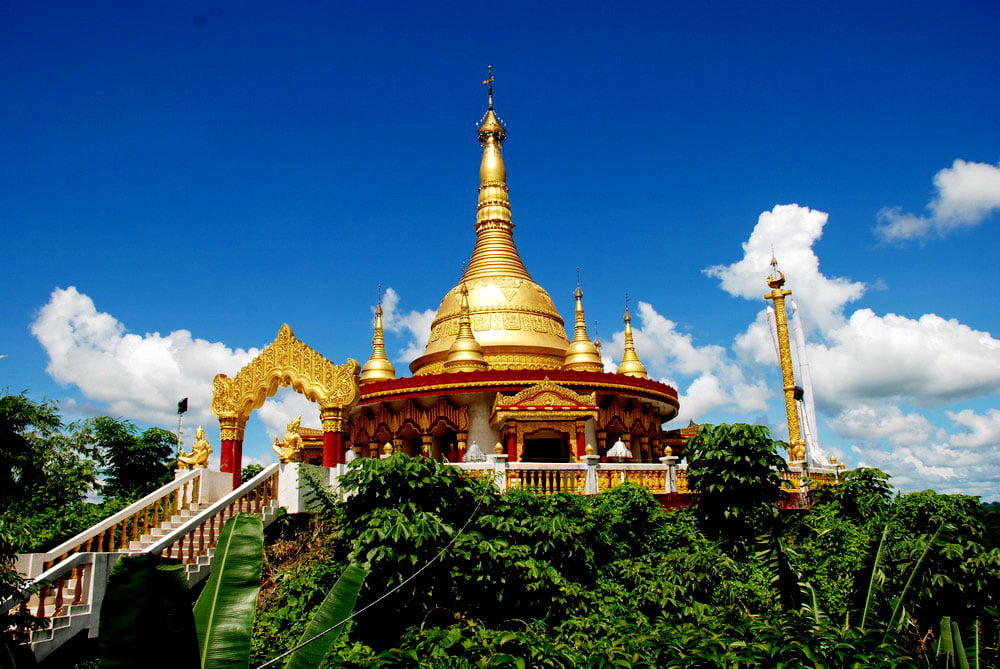 It is a sacred place of worship for Buddhists. You have to take off your shoes and enter the entrance stairs. It is best to observe as much silence as possible so that the prayers of the monks are not interrupted.

How To Go To Buddha Dhatu Jadi

From different places in Dhaka buses of S. Alam, Saudia, Saint Martin Transport, Unique, Hanif, Shyamoli, Dolphin etc. leave for Bandarban. The fare of these buses per person is non AC 550 and AC 950-1500 respectively. It takes 8-10 hours to go to Bandarban by bus from Dhaka.

If you want to go by train from Dhaka to Chittagong Sonar Bangla, Subarna Express, Turna Nishita, Mahanagar Godhuli you can go to Chittagong by these trains. Rent varies from 350 to 1200 Taka. Besides, you can come to Chittagong directly by air from Dhaka.

From Baddarhat in Chittagong two pubs named Pubali and Purbani left for Bandarban. These two buses cost 220 Taka per person. You can come to Bandarban by bus from Dhampara bus stand in Chittagong for 200-300 Taka.

From Bandarban you can rent a CNG autorickshaw or chandergari or jeep to reach the Golden Temple. It will take 300-600 BDT just to go to the Golden Temple. However, tourists usually reserve a car in the vicinity of Bandarban, such as Nilgiri, Nilachal, Chimbuk, Shailprapat, Meghla, etc. 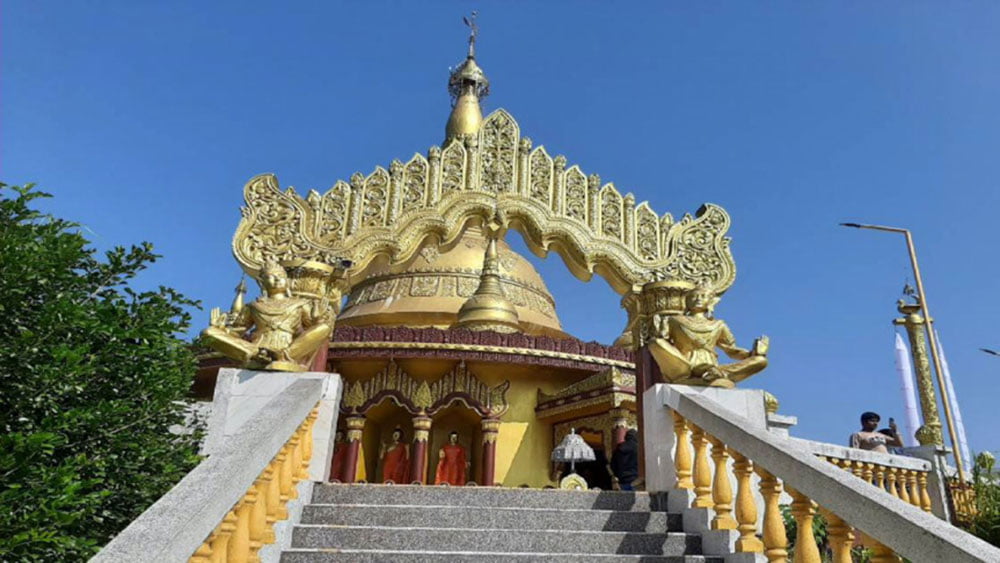 Where To Stay At Buddha Golden Temple

Note: The fare will depend on what time you are going. Due to the high number of tourists during the season (December to February) and public holidays, the fare may be lower or higher. And if you go on season and holidays, you can book a hotel room in advance to avoid trouble. In addition, there are numerous resorts, hotels, motels and rest houses in which you can easily spend the night for 500 to 3000 taka. 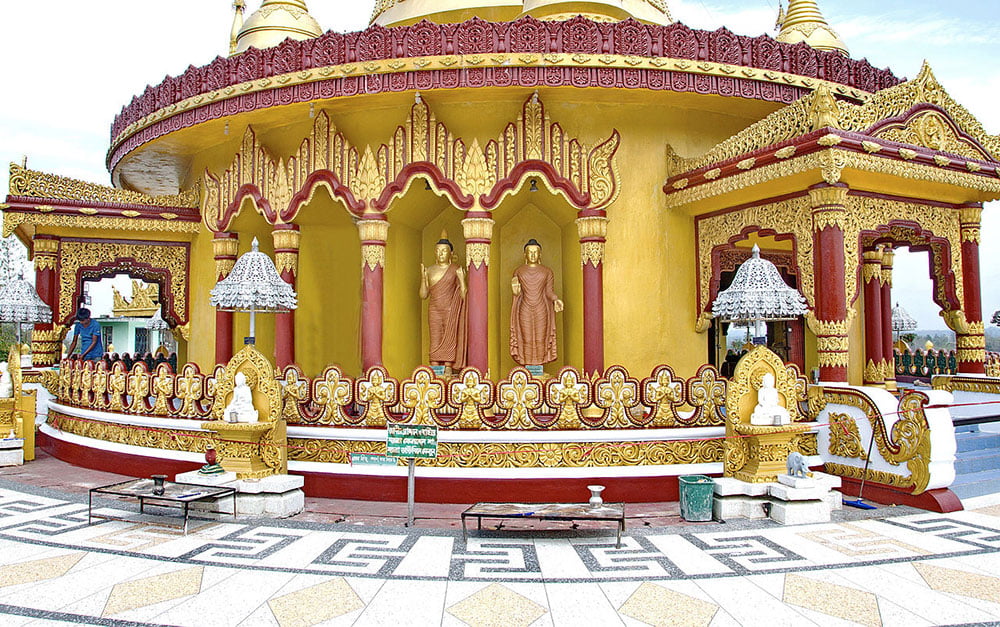 There are several medium quality hotels in Bandarban town for tourists to dine at. From them you can have three meals at the hotel of your choice.
Among them are Tazing Dong Cafe, Meghdoot Cafe, Food Place Restaurant, Rupshi Bangla Restaurant, Ree Sang Song, Kalapata Restaurant etc.

You can contact Travel Mate for Bandarban Golden Temple Tour Packages, Hotels, Bus Tickets, Air Tickets or any corporate or event or family trip. or Call +88 01766-99-0725

The Buddhist temple is known to the locals as Qiang. Buddha Jadi Pai Kiang is located in Bandarban district of Chittagong division. The two highest peaks of Bangladesh, Tazingdong and Keokradong, are located in Bandarban district. The Sangu River flows through the city. The temple is located at the top of the hill, 4 km from Balaghat and 10 km from Bandarban Sadar. There is a lake on this hill. The name of the lake is Devta Pukur. According to Buddhist monks, it is the pond of the gods, so there is always water here. This Jadi is now not only a place of pilgrimage for the Buddhist community but has also become one of the most attractive spots for domestic and foreign tourists. Although it is known as the Golden Temple, it is not made of gold. It is called the Golden Temple mainly because of its golden color. 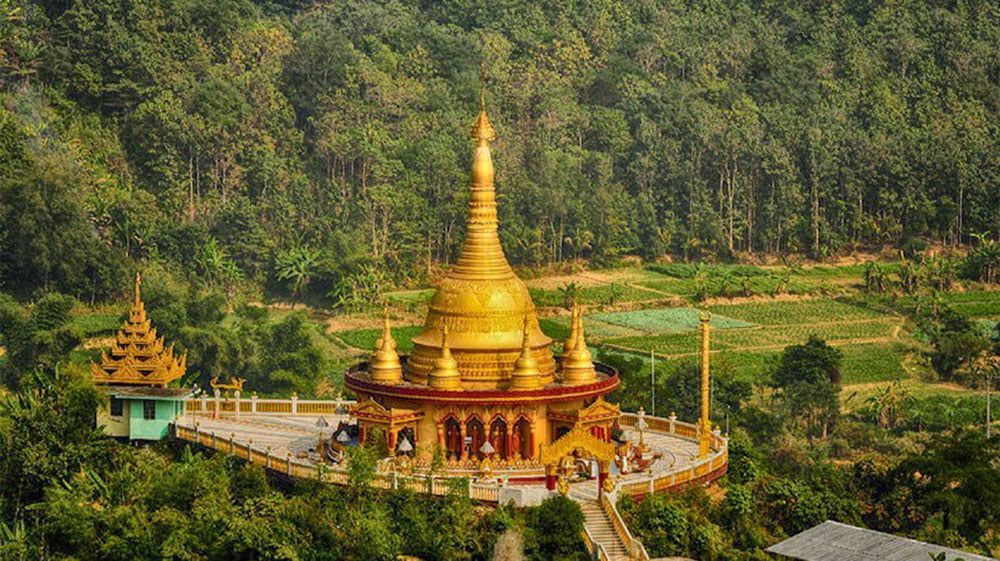 Tourists other than Buddhists can visit the temple in exchange for tickets. However, ordinary visitors are not allowed to enter the main part of the temple, i.e. where the Jadi is. This place is very attractive as it is an example of the golden color of the temple, a unique style of construction and modern religious architectural design.

Buddha Dhatu Jadi is a perfect place for a group or family tour. The beauty of this place will give you awesome feelings. At the same time, you can come back within two or three days by visiting here. Hopefully, you can go to Buddha Dhatu Jadi within a tight budget. If you want to travel Golden Temple Of Bandarban (Bangladesh) with safety and want to enjoy the place with more joy, Travel Mate can help you with arranging the tour. Contact us for further details. Above all, you may add any missing information from the comment section. Happy Traveling. ♥