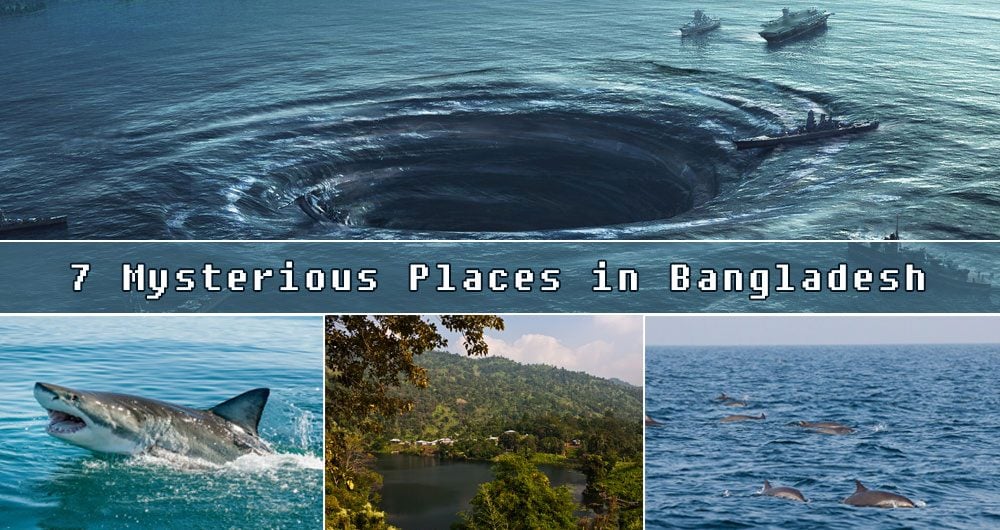 The incapability of knowing any place or incident does not mean it is mysterious. But we have the attractions of these things. For this reason, we have tried to arrange some places which are not discovered at all. Let’s talk about some mysterious places in Bangladesh.

1. Swatch of No Ground

During the British colonial rule, the meeting place of Meghna and the Bay of Bengal is named Swatch of No Ground. According to the British, there is no depth limit on this sea here. Many experts think that the swatch of no ground is the world’s second-biggest alloy. Yet, it is not possible to measure the depth of this swatch of no ground. Researchers say it may be created almost 1,25,000 years ago. Even, there are no sources if it is possible to measure the depth of this area. If you love adventure, you might visit this place. It is 40km away from the Dublar Char of Sundarbans. It is the sanctuary of marine organisms. You can see the real Dolphins, Whale or Shark here. The only option to visit Swatch of No Ground is going with the local boat of fisherman. There are many common stories about the Lalbagh Fort. Especially, it is about the hidden tunnel of Lalbagh. It is believed that this tunnel was used as the escaping path of the Zamindars. The main mystery of this tunnel is that once entering here it is not possible to return. It is familiar that, the entrant cannot be found anymore. The inside of the Lalbagh Tunnel is very dark. Even the torch will not work here to see the surroundings. At present, the tunnel of the Lalbagh Fort has been closed down by the Govt. of Bangladesh. For this reason, the tunnel of Lalbagh Kella has still remained mysterious.

You can visit Lalbagh Kella. If you want to know the travel guideline of Lalbagh Fort you can see this post. Bagakain lake or Bogalake is located near Keokradong mountain in Ruma Upazila, about 70 kilometers away from Bandarban district town. This is the freshwater lake on the highest altitude of Bangladesh. The ‘Bawm’ tribes living around the Boga Lake believe that long time ago the dragon lived here and will eat the small children. The villagers killed the dragon thinking of their safety. Then a fire broke out from the mouth of the dragon and exploded it to the mountain. At last, it was created this lake. The meaning of the local word “Bawm” is the dragon. The signboards of the Ruma Upazila Parishad tells the above story of Boga Lake. Still now, the depth of the Boga Lake is unmeasurable. Again, without any proved reason this lake’s watercolor changes automatically. Chalan Beel is located at the side of three districts including the Natore, Sirajganj, and Pabna. It is a spectacular place of the local and foreign tourists. Though Chalan Beel spread across three districts, there are many ghost stories in the local people with the Sirajganj part. It makes tourists more interested to visit Chalan Beel. It is known that the Zamindar of Tarash Upazila of Sirjganj had supernatural power. Suddenly due to an unknown reason he died. On the night of the zamindar’s death, three temples were built here. On the other hand, the temples were automatically broken down in the day time. Since then there are some mysterious events happening with the local people. It is not proved, but it is the belief of the local people. Foy’s Lake is a famous place in search of beauty and entertainment. It is located in the Chittagong District since 1924. Important to realize, with the beauty of the Foy’s Lake, there are many stories surrounding the Lake. Often it is heard that two mysterious women with white and black dresses roam around the lake. According to local people, these two women died in the Lake but their insatiable soul never left this place. However, there is no truth still now in these stories. Not to mention, the conventional ghost stories make Foy’s Lake more mysterious. Chikon Kala or Nefiu Para is a mysterious village located in No Man’s Land of Bangladesh and Myanmar border. Here, the voice of Pig, Peacock, Tiger, and bear are often heard tonight. There are also randomly seen the derm of leopard tigers. According to the people of Chikon Kata, strange sound comes out of the forest in the unknown times in a year. If anyone goes in that time, he never comes back. After a while, they found their dead bodies in the forest but there were no signs of injuries in the body. During British rule, the British civil surgeon of Bakerganj (Barisal) told about ‘Guns of Barisal’ first. Every year from the beginning of the rainy season, from October to February, there was the sound of fire from the depth sea. The British thought that there was the pirate preparing for the attack. Every time after many enquire there were not found any pirates. The sounds of one or more cannabis were heard from the south and south-east side. But no one can discover this mystery. In the autobiography of Popular Poet Sufia Kamal has also written about the sound of this cannon. But since 1950, the sound of this mystery cannon was not heard anymore. Want to Travel the Mysterious Place in Bangladesh?

Yes! There is no mystery when it is discovered the truth. But in this scientific world, some places and incidents cannot be described! Of course, we have limitations. One day, it will be expressed and then it will be an interesting story. Anyway, what is your opinion about these mysterious places in Bangladesh? You can share your thoughts or opinion from the comment section. If you like the article, share it with your friends. Similarly, if you want to visit those mentioned places, you can contact the Travel Mate team.

Previous postTop 10 largest Mangrove Forest In The World
Next postIndigenous (Tribal/Ethnic) People of Bangladesh: Their Belief, lifestyle and Culture