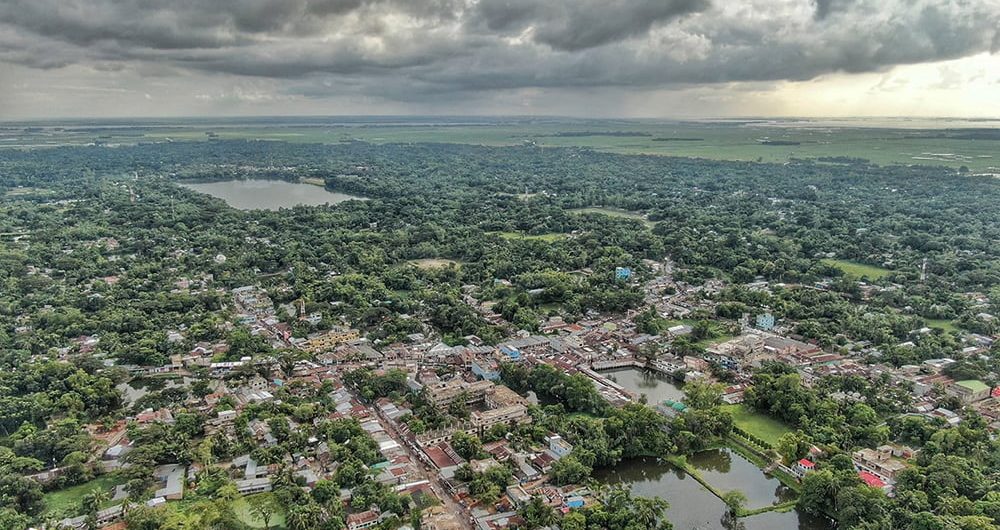 Baniachang (বানিয়াচং) in Habiganj district is now known as the largest village in the world. We see the combination of history, tradition and beauty in Baniachang.

There are many antiquities including the historic Kamala Rani Dighi, Lakshmi Baor, the 600-year-old Bithangal Akhra, and the ancient mosque.

Baniachong The Largest Village In Asia: The History

Baniachang Upazila is a naturally beautiful and historical place. Geo-structural degradation adorns with numerous haor in Baniachang. It is an eye-catching golden land inhabited by innumerable rivers and lakes and canals. In the rainy season, the water level in the haor is high. These water waves, illuminated by the rhythm of songs to the beat. Horizon crop fields in autumn. The fragrant aroma of Aman paddy is the traditional form of luminous Bengal. Green ceremonies all around during the Boro season. In Boishakh, the heart is covered with golden colored rice stairs. The joy of harvesting becomes a festival. The continuous life on the banks of the Haor is based on “Paddy in the House, fish in the water and song in the throat.” The greatness and excellence of humor in the characteristics and variety of struggling life.

Inside the village, innumerable rivers and canals have flowed. In the rain, the village floats like a picture of vast water everywhere. Along the banks of numerous canals and lakes, the aesthetic location of the villagers attracts visitors. The curiosity to know draws us closer to the rural tradition. Baniachang is the birthplace of the legendary Singer Subir Nandi and the legendary Literature of Alal-Dulal, Rani Bhabani, Amena Sundari, Afzal Khan and Arju Banu. This green land of ancient settlements, haor baor, numerous birds and full of fruits is a reflection of proud Bengal. There is a wide variety of folklore to fascinate tourists and visitors.

The Akhra is located at Bithangal village on the banks of Haor, about 12 km southwest of Baniachang Upazila Sadar. Which is one of the pilgrimage places for Vaishnavism.

Around this Akhra, Kirtan (Religious Song) is performed on the last day of the month of Kartik on the occasion of Bhola Sankrani. The fifth Dol festival is celebrated five days after the full moon of Falgun. On the eighth day of the month of Chaitra, devotees worship at the ghats of the river Mohra and Baruni Mela is held at the ghats. Besides, the rath yatra was held in the 2nd week of the month of Ashar. Each festival attracts 5,000 to 10,000 devotees. Among the spectacular objects in the Akhra are 25 stone chairs, brass thrones, chariots rich in antiques, and silver birds and gold crowns.

How to get Bithangal Akhra: In the dry season from Habiganj Kamrapur Bridge by jeep to Sujatpur by boat or on foot in the rainy season by boat from Habiganj Kalar Duba or from Baniachang Adarsh ​​Bazar by boat. 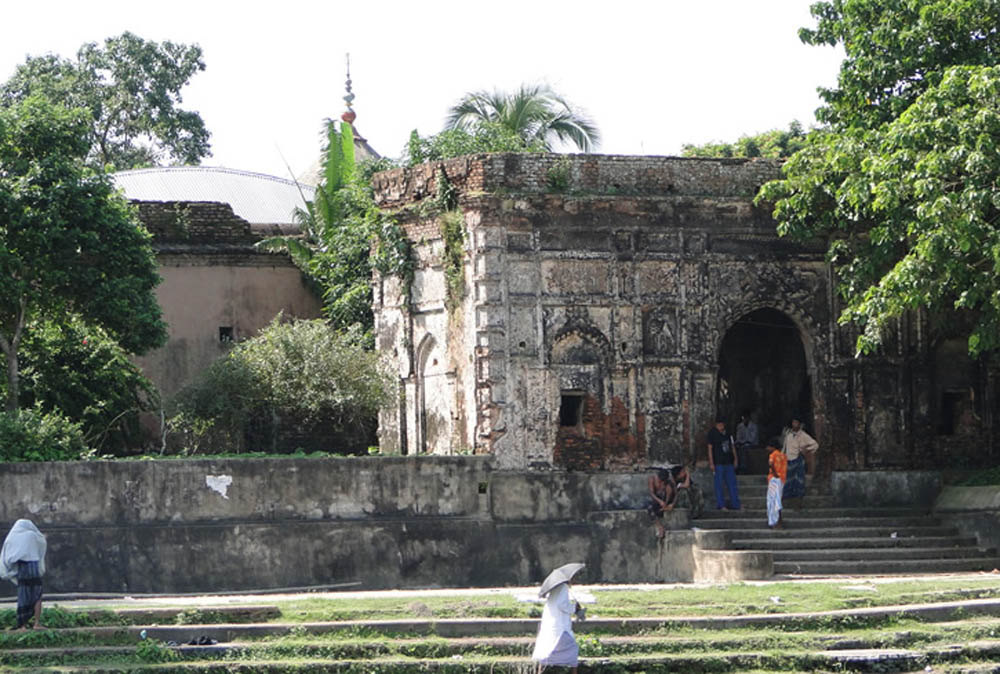 Ruins of the palace

After Govinda Singh became the ruler of the Baniachang kingdom, he built a palace on the west bank of the Padmanabha or Karnakhan Dighi. At present, some parts of that palace exist. Next to it is the tomb of Dharman Rit Govind Singh (wrapped in ancient bricks). The remaining walls of the palace were removed and Loknath Raman Bihari High School was established about a hundred years ago.

There are 4 pillars of the stone building standing in ruins and there are pieces of sand and marble stones lying on all four sides. They are called ‘Habya’ and ‘Ghoma’. In the fairy tale ‘Habya’ and ‘Ghoma’ were two brothers wrestlers. It is said that they used to play daraguti with this piece of stone on the bank of the lake. In fact, ‘Habya’ and ‘Ghoma’ are the same name. From Habib, ‘Habya’ and from Govinda, ‘Ghoma’ are mispronounced. In about the seventeenth century, Dewan Abed Raja moved that palace to the north of Baniachang Kasbar. That area is known as Dewan Bagh. At present the palace is a dilapidated ancient building and a place of interest in ancient and complete Mughal architecture.

How to get there: From Baniachang Upazila Parishad you can go to the palace on foot or rickshaw.

In the twelfth century, King Padmanabha dug the dighi in the middle of the village to alleviate the water shortage of the people. There is an anecdote in the region that Rani Kamalavati, the wife of King Padmanabha, surrendered in a dream as the water did not rise after digging this Dighi. For this reason, this Dighi is also called the Dighi of the orange queen. 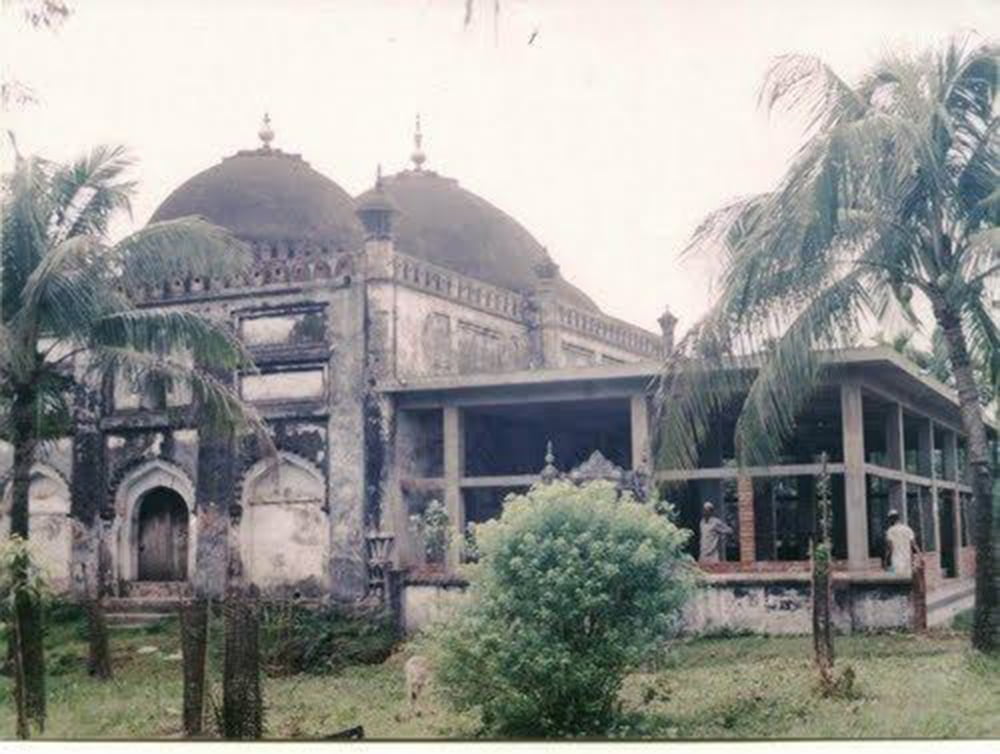 We see Bangla movies, the drama surrounding this Dighi. Sitting on its banks, the village poet Jasim Uddin composed a poem called ‘Rani Kamalabati’s Dighi‘. That poem is included in his book of poems ‘Suchayani‘. This lake is known as the second largest in Bengal. At present, the lake is spread over an area of ​​6.00 acres. The water boundary is 40.00 acres and the four banks are 26.00 acres. Many tourists are of the opinion that it would be interesting to build a tourist park in the shape of Ram Sagar in Dinajpur on those four banks. At present, the government is bringing this lake under fish farming and is earning a significant amount of revenue annually by leasing it.

How to get to Sagardighi: From Baniachang Upazila Parishad you can reach Sagardighi on foot or by rickshaw.

Sri Sri Shyam Baul Goswami was a great man of the age, capable of attaining miraculous powers. After being initiated by Sri Sri Rama Krishna Goswami, he came to Baniachang to preach Vaishnavism. After overcoming many obstacles, he finally established an Akhra in Jatrapasha mahalla. He took place in the hearts of people as the savior of helpless diseased beings. Shyam Baul has many devotees and disciples in the northeast of Bangladesh and in India. Every year the Eighth Bathing Fair is held in the month of Chaitra in his memory near the Akhra.

How To Go To Shyam Baul Goswami’s Akhra: You can go by rickshaw or CNG from Upazila Parishad to the new market. 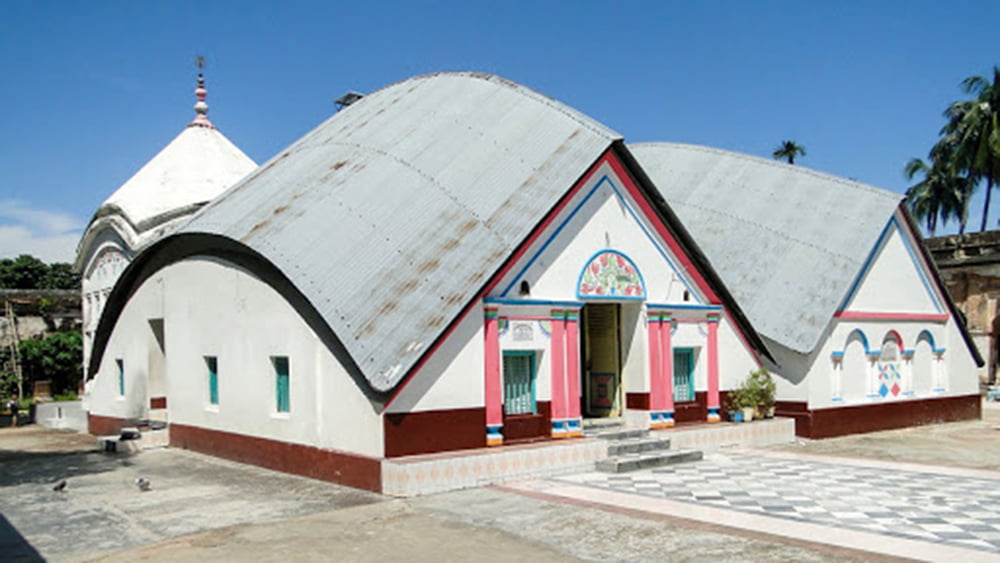 Lakshmi Baor Swamp Forest (Jalaban) in Baniachang Upazila of Habiganj can be an interesting tourist spot. Located on the Baniachang Upazila on the south side of the Kharati River, this wetland is also known as Khorti Jungle to the locals. Even the elders cannot say when this jungle was started. This variety of nature is really wonderful here. During the rainy season, the water of the Haor and the green forest of innumerable plants of the forest have given an aesthetic look to the environment. Looking at the forest from a distance in Haor, it will seem as if it is floating on water. Hijal, Karach, Varun, Kakura, Boulla, Khagra, Chailla, Nal etc, this water forest full of innumerable trees and shrubs has been undiscovered for so long. 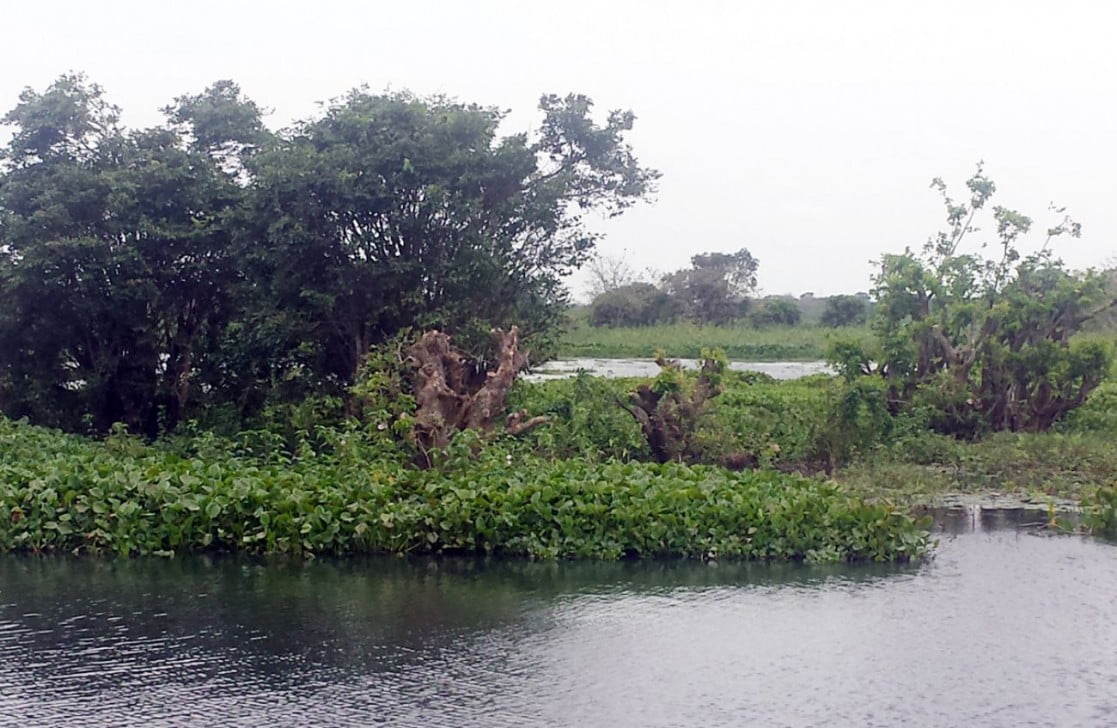 How to get To Lakshmi Swamp Forest: It is 5 miles north of Adarsh Bazar Naukaghat in Baniachang Upazila Sadar, 12 miles from Habiganj.

This research institute is located in Nagura under Baniachang upazila near the district headquarters, which is the first deep water in the subcontinent to develop cultivable paddy. Officially known as Bangladesh Rice Research Institute, Nagura, it is better known to the public as Nagura Farm. Founded in 1934, the research institute developed rice to compete with rainwater. As a result, the rice root never goes away. Among the hybrid varieties of rice developed in this farm are Bri-51, Bri-52, Bri-29, Bri-19 etc.

In addition to inventing new varieties of paddy, experimental cultivation of paddy is done here and necessary information is collected. Government and private officials from various training centers at home and abroad, including the Bangladesh Public Administration Training Center, came to visit the institute as part of their training. Note that the green campus of this laboratory has become a sanctuary for thousands of different species of birds. The campus has already attracted the attention of tourists as a place of interest due to the ingenuity of Birds and the creativity of talented scientists.

August 16, 1971. Makalkandi is a Hindu village in Kagapasha Union, a remote area of ​​Baniachang Upazila. In the morning, the residents of the Hindu inhabited village were preparing for Manasa Puja at the Chandi temple in the village. At that time 40-50 boats came with the help of Pak army razakars and attacked. The worshiping men and women stood in front of the Chandi temple and killed many villagers, including 11 members of the same family, in a brush fire. The Pakistan forces indiscriminately shot and killed 141 innocent Hindus.

How to go To Makalkandi Memorial: From The Adarsha market of Baniachang Upazila Sadar you can go by boat in the rainy season, motorbikes in autumn, light vehicles including trolleys and on foot. 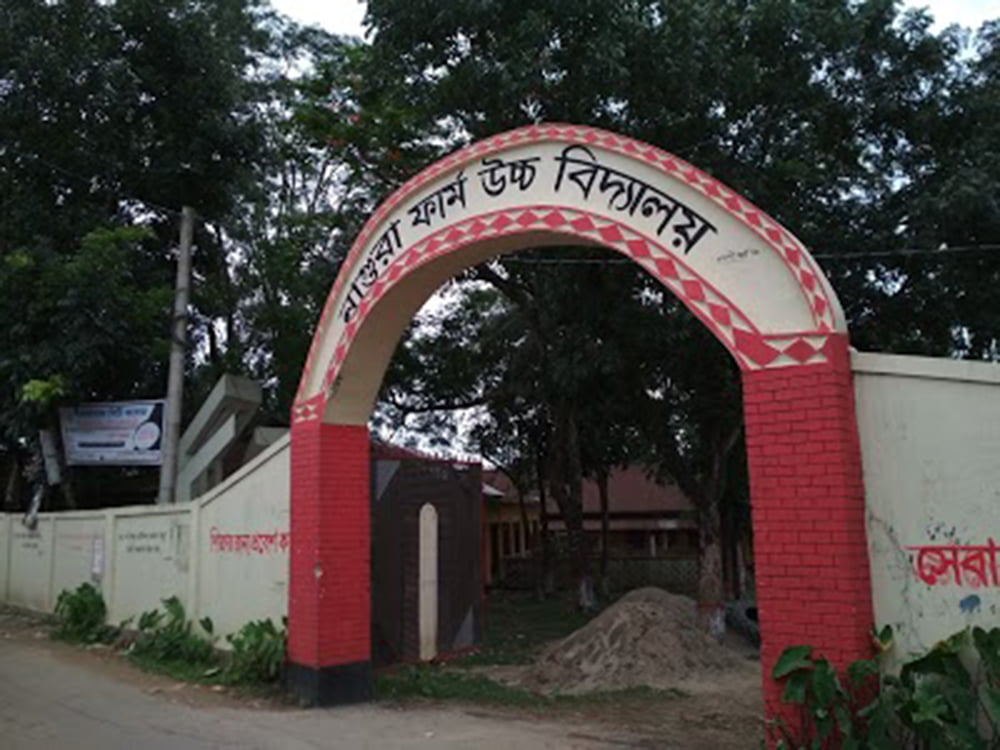 Ways and costs to get to Baniachong

You can come to Habiganj by bus from anywhere in Bangladesh, it is really good by train from Dhaka or Chittagong. If you want to go by train, first get off at Shayestaganj and from there come to Habiganj with CNG fare of Tk 25. CNG fare from Habiganj to Baniachang Barabazar is Tk 40. It will cost 150-200 BDT to travel from Baniachang Barabazar to Rajbari and Sagardighi with Tomtom Reserve.

To go to Laxmi Swamp Forest, you have to reserve a tomtom from Borobazar, in which case you can go to Maidya Ghat with 300 tk, from there you can reserve another tomtom and walk along the river bank and walk around the Horti forest for 500-600 BDT. If you want to go to Bithangal Akhra, Tomtom Reserve will charge 400-500 BDT.

Need To Tell, you have no need of taking guide for traveling Baniachong.

Baniachang Or Baniachong (বানিয়াচং) is the largest village in Asia. Despite the possibility of setting up a tourist center with a nice ‘lake’ surrounding the village, other facilities need to develop for the tourist center.

Prime Minister Sheikh Hasina recently announced at a public meeting at the LR School Grounds that Baniachang would be turned into a tourist destination around Kamalarani Dighi. 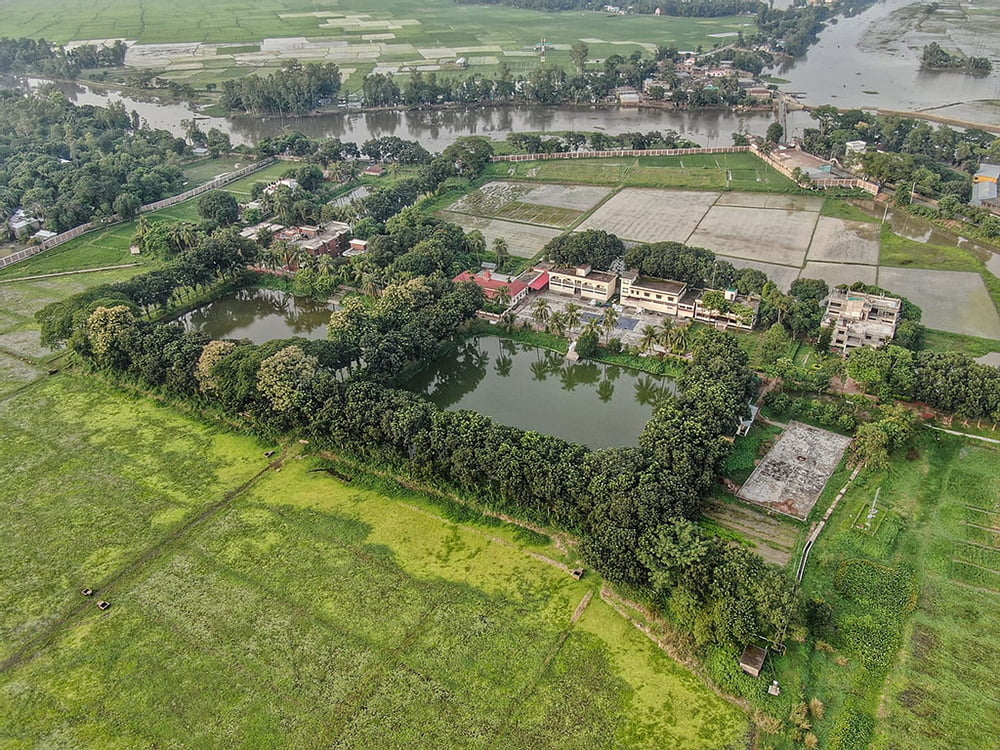 Baniachang is a perfect place for a group or family tour. The beauty of this place will give you awesome feelings. At the same time, you can come back within one or two days by visiting here. Hopefully, you can go to Baniachang (বানিয়াচং) within a tight budget. If you want to travel Baniachang with safety and want to enjoy the place with more joy, Travel Mate can help you with arranging the tour. Contact us for further details. Above all, you may add any missing information from the comment section. Happy Traveling. ♥

Amirul khan
Reply
Its more beautiful than the description. The beauty of changes in every season.very pleasant weather to live. Everyone should come to visit Baniyachong at least one time . Proud to born here.

Staff Editor
Reply
Thanks for staying with Travel Mate. Hope we will meet you at Baniachong - the biggest village in Asia.