The vast ruins wall of Mahasthangarh (মহাস্থানগড়) is a silent witness to the glorious history of Pundranagar (Pundranagara), the capital of Paundravardhanapura, which has a glorious history of nearly two and a half thousand years. The ruins are located on the west bank of the river Karatoya River, 13 km north of Bogura district town.

This fortified city, the foremost and oldest in the whole of Bengal, is protected by a periodic earthen and brick enclosure wall which is 1525 m long in the north-south and 1370 m wide in the east-west and 5 m high from the surrounding plains.

In addition to the Wall, rivers on the east and deep trenches on the other three sides have been used as additional defenses. Archaeological evidence suggests that for several centuries it was the provincial capital of the mighty Maurya, Gupta and Pala rulers, and later the Hindu parallel kings. 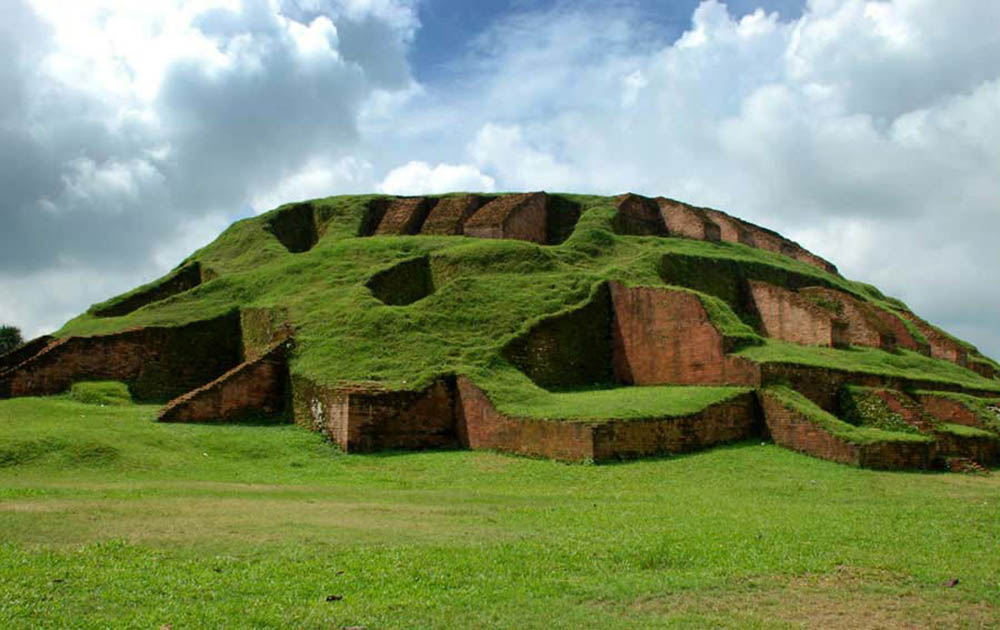 Outside the fort, within 7/8 km of the north, west, south and southwest, there are still many ancient monuments of various kinds which bear witness to the sub-city. It is to be noted that the famous Chinese traveler Xuanzang (Hiouen Thsang) visited Pundranagara during his travels in India (639-645). The eminent British archaeologist Sir Alexander Cunningham accurately identified the ruins of Mahasthan Garh in 1879 AD as the city of Pundu described by Fuen Tsang.

The first archeological excavation work was started at Mahasthangarh in 1928-1929. During this time excavations were carried out at 3 places called Vita Munir Ghon in Boiragi and Govinda Vita outside the city. After a long time, various parts of the fort were regularly excavated in 1960-1961 and later in 1988.

Since 1993, the government of Bangladesh and France started excavating Mahasthangarh jointly and found a new dimension in the field of archeological research here. In the first phase, excavations were carried out in the middle of the fort wall till 1999. In the second phase, excavations have been carried out on the west side of the shrine since 2000. 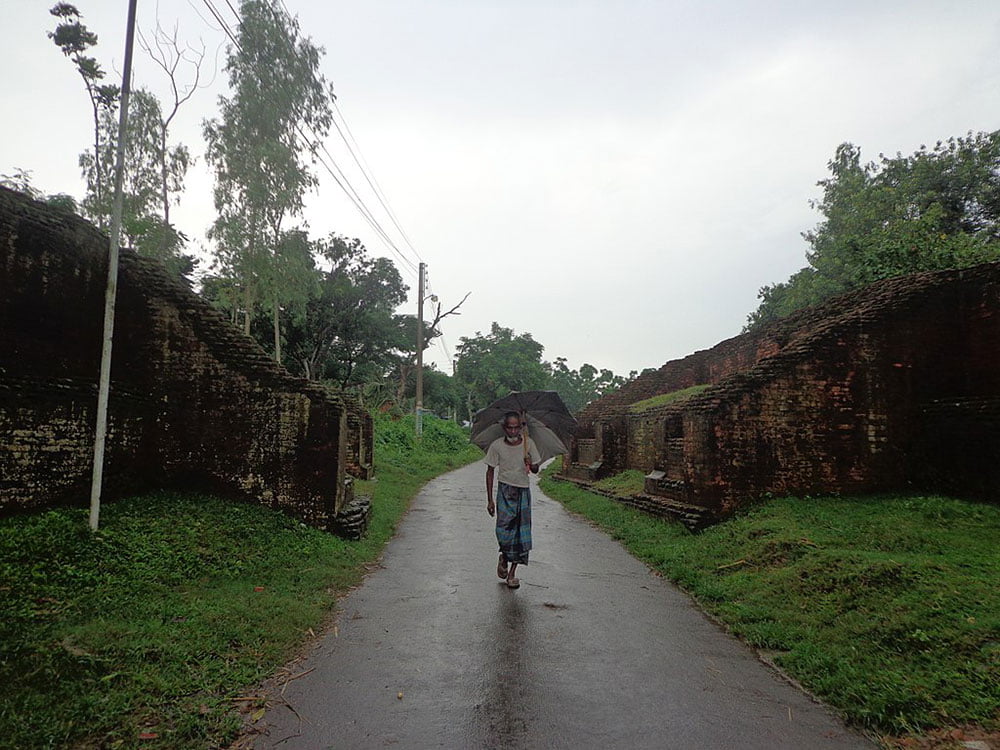 In addition to these architectural structures have been discovered. Various immovable cultural objects of contemporary urban life such as Mauryan-era tapered rock fragments, stamped silver coins and molded coinage, black and batch chairs, bulleted warp and embroidery, northern black smooth pottery, pottery Of particular note are the earthenware, lots of common pottery, and a stone slab with Arabic inscriptions.

You can contact Travel Mate for Mahasthan Garh Tour Packages, Hotels, Bus Tickets, Air Tickets or any corporate or event or family trip. or Call +88 01766-99-0725

The ruins of the town can be seen on the west bank of the Karatoya River, 13 km north of Bogra. Mahasthangarh is a city about two and a half thousand years ago. At that time its name was Purnandranagar.

Famous for its Buddhist teachings, monks from China and Tibet used to come to Mahasthangarh to study. Then they would go out to different countries in South and East Asia Going there, they spread the teachings of Buddhism

The history of Mahasthangarh was discussed with Jayant Singh Roy, Assistant Professor, Department of Archeology, Jahangirnagar University. He said, “Mahasthangarh is the oldest capital city of Bangladesh discovered so far Pre-Maurya period, meaning about two and a half thousand years ago, traces of human settlement have been found here. 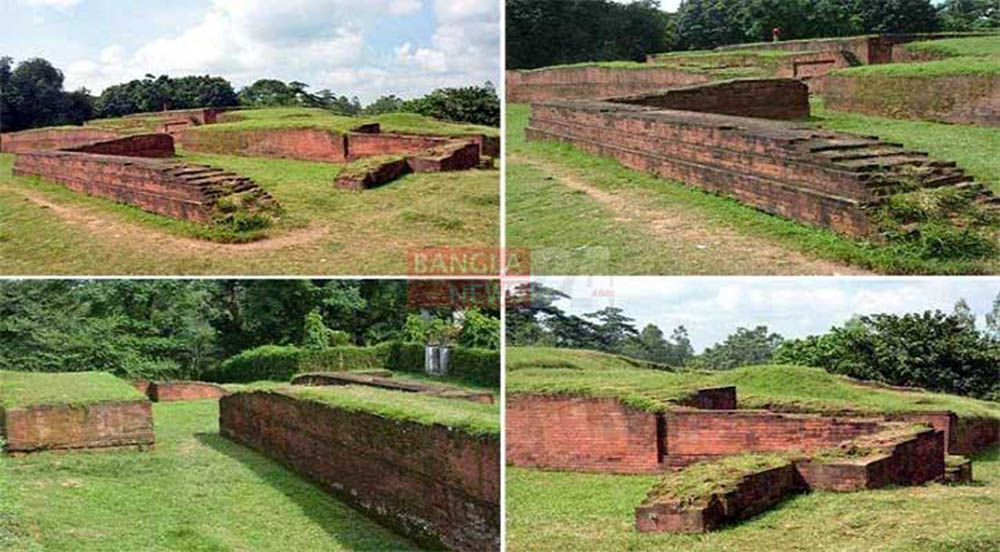 It is also known from various archeological finds at Mahasthangarh that for several centuries it was the provincial capital of the powerful Maurya, Gupta and Pala rulers and later the capital of the Hindu feudal lords. Outside the fort, within seven to eight kilometers of the north, west, south and southwest, there are still a variety of ancient monuments that bear witness to the sub-city.

“The first excavation at Mahasthangarh was started by an archaeologist named Alexander Cunningham,” said Jayant Singh. He was the founder of the Department of Archaeological Survey of India Excavation work has been going on since then In addition to the fortifications of the fort, the existence of some buildings has already been discovered.

Although it was started by Cunningham, the best excavation work in Mahasthangarh started in 1991 At that time, some French archaeologists started working jointly with Bangladeshi archaeologists. Jayant Singh said, “Many archeological specimens have been found in their research.” From sculptures to coins of different eras, pottery, beads, etc.

Many things can be seen in the Mahasthangarh Museum.

All Mahasthangarh has various historical places and important installations. These include the remains of two temples at Bairagir Vita, Khodarapathar Vita, Kalidah Sagar and Padmadevi residences, Shiladevi Ghat, Jiutkund Kup, the remains of a 15-domed mosque on Mankali Island Familiar. 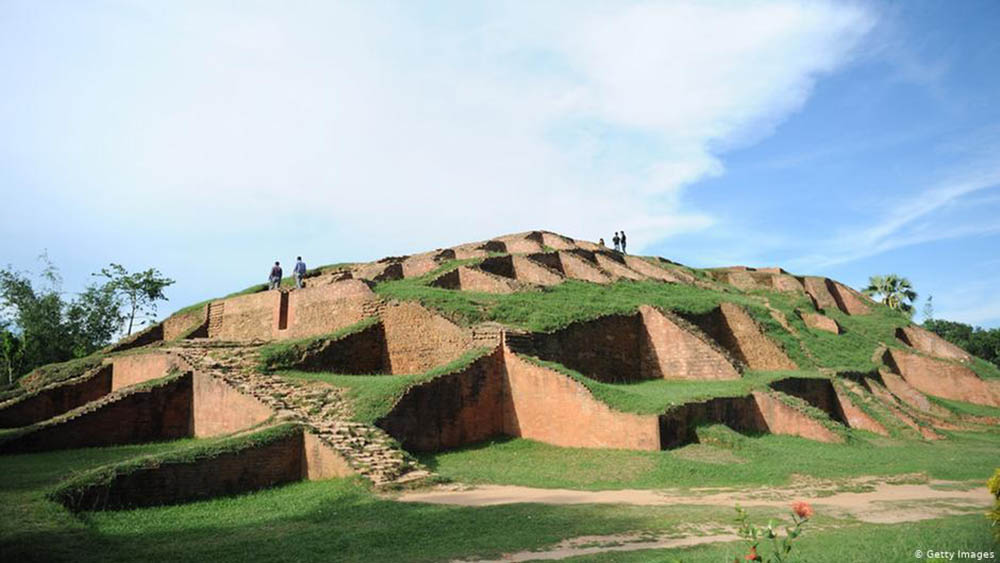 Traditional Archaeological Excavations at Mahasthangarh Archaeological Survey of India N. It was first started in 1928-29 under the supervision of Dixit. Then Munir Ghon and Bairagir Vita were visited around the wharf. Excavations at Bairagir Vita and Govinda Vita were suspended in 1934-36. In 1980, excavations were carried out near the shrine, Parshuram’s palace, Mankali’s steps, Jiyat Kund and the north wall. Subsequent excavations on the eastern and northern defenses were sporadic, although no final report has been released.

Mahasthan Garh is one of the ancient tourist centers of Bangladesh. Bogu is a place of interest here. In 2016, various programs have been organized in Mahasthangarh as the cultural capital of South Asia.

Mahasthangarh is located 11 km (6.8 miles) north of Bogra on the Bogra-Rangpur highway. Next to it, a thin stream of Karatoya river is flowing. The road leads to Jahghata and the museum. There are direct buses from Dhaka and it takes about four and a half hours to cross the Bangabandhu Jamuna Bridge over the river Jamuna. Buses are also available from Bogra and there are rickshaws for local transportation. Rental cars are also available from Dhaka or Bogra. If you travel by car, you can go back the same way, or if you want, you can visit Sompur Maha Vihara in Naogaon Paharpur.

is located a little west of Mahasthan bus stand. It is said that he came to Barind land on the back of a fish. That is why he is called Mahi Sawar. It is said that a Muslim named Hazrat Mir Borhan lived here. King Parshuram ordered his sacrifice for the crime of sacrificing a cow by swearing a son, and Mahi Sawarer came to help him.

Mazar Sharif of Hazrat Shah Sultan Mahmud Balkhi (R.) is located a little west of Mahasthan bus stand. It is said that he came to Barind Tract on the back of a fish. That is why he is called Mahi Sawar. It is said that a Muslim named Hazrat Mir Borhan lived here. King Parshuram ordered his sacrifice for the crime of sacrificing a cow by swearing a son, and Mahi Sawarer came to help him. 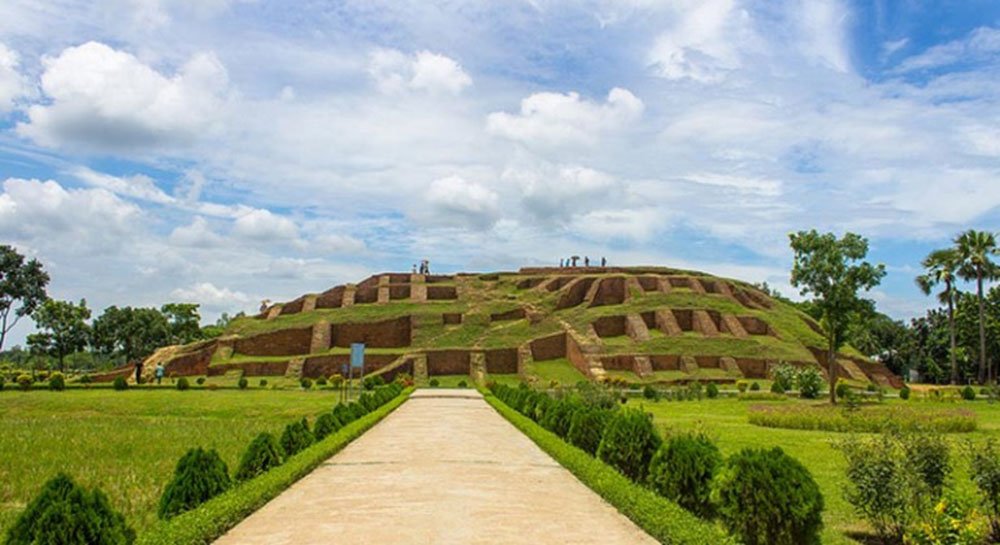 In the western part of the average are the historic Kalidah Sea and the residence of the Padma Devi.

To the east of the average is the ‘Shiladebi Ghat’ on the banks of the river Karatoya. Shiladevi was Parshuram’s sister. Hindus bathe here every year and a one-day fair is held here.

To the west of this ghat there is a large well called Jiutkund. It is said that the wounded soldiers of Parashuram would have recovered by drinking the water of this well.

Excavations at Mahasthan Garh have unearthed statues of many deities, including various items from the Maurya, Gupta, Pala and Sen eras, which are preserved in a museum north of Garh. 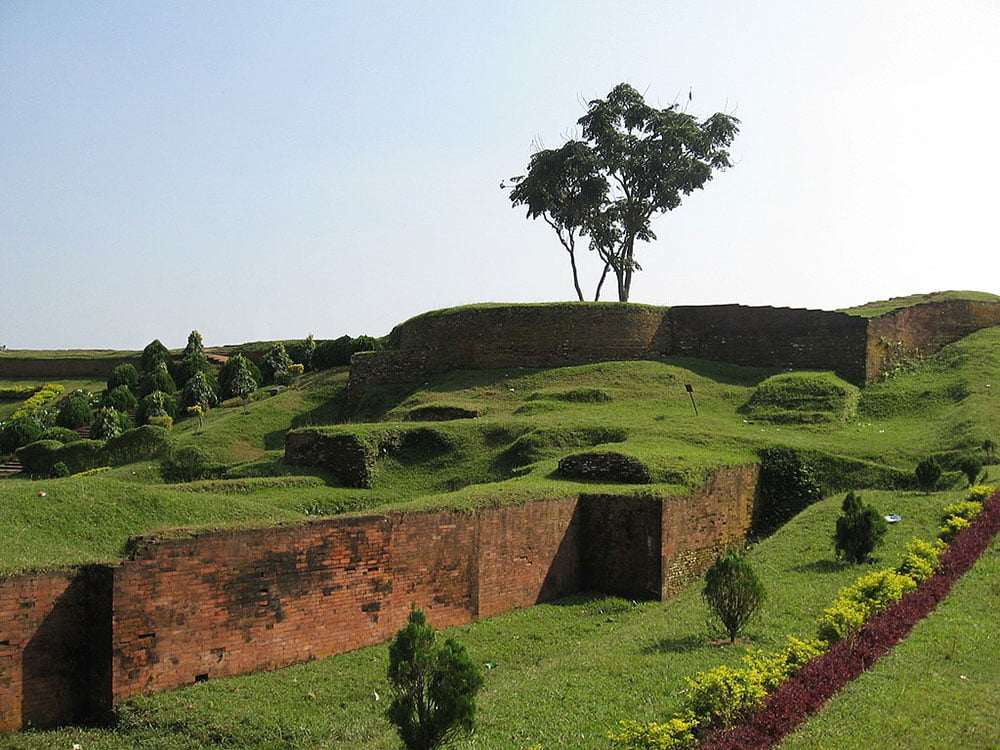 There is a Buddhist pillar about 2 km southwest of Mahasthangarh bus stand which is believed to have been built by Emperor Ashoka. The height of the pillar is about 45 feet. On the east side of the pillar is a bathroom resembling a well-known 24 angles basin.

How to Go To Mohasthan Garh

It is 15 km north from Bogra Satmatha, can go by CNG.

By bus from Dhaka to Bogra

Train from Dhaka to Bogra

Mahasthangarh can be easily reached by CNG or autorickshaw from Bogra city. 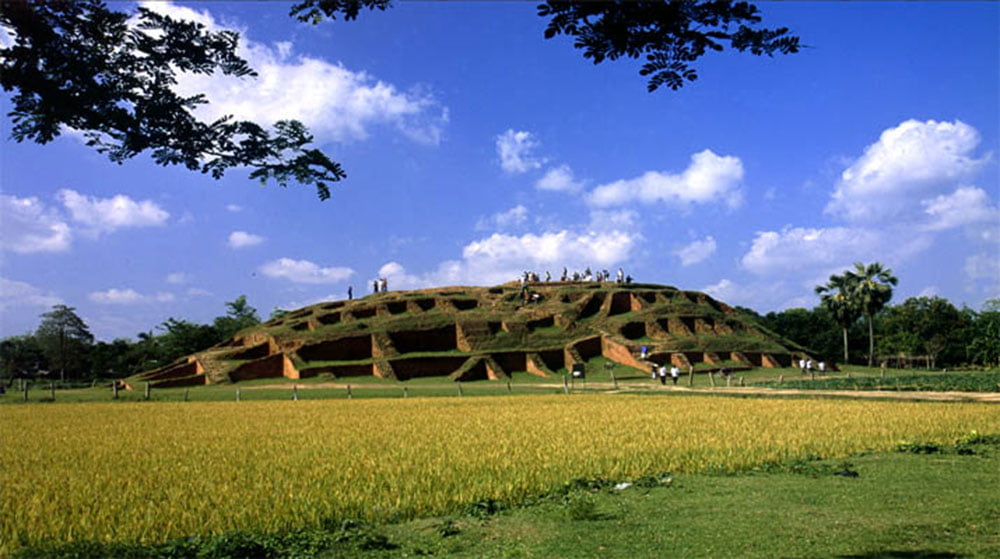 Where to stay At Mahasthan Garh

Want To Travel Mohasthan Garh With Family Or Friends?

Mahasthan Garh (মহাস্থানগড়) is a perfect place for a group or family tour. The beauty of this place will give you awesome feelings. At the same time, you can come back within two or three days by visiting here. Hopefully, you can go to Mohasthan Garha within a tight budget. If you want to travel Mahasthan Garh with safety and want to enjoy the place with more joy, Travel Mate can help you with arranging the tour. Contact us for further details. Above all, you may add any missing information from the comment section. Happy Traveling. ♥