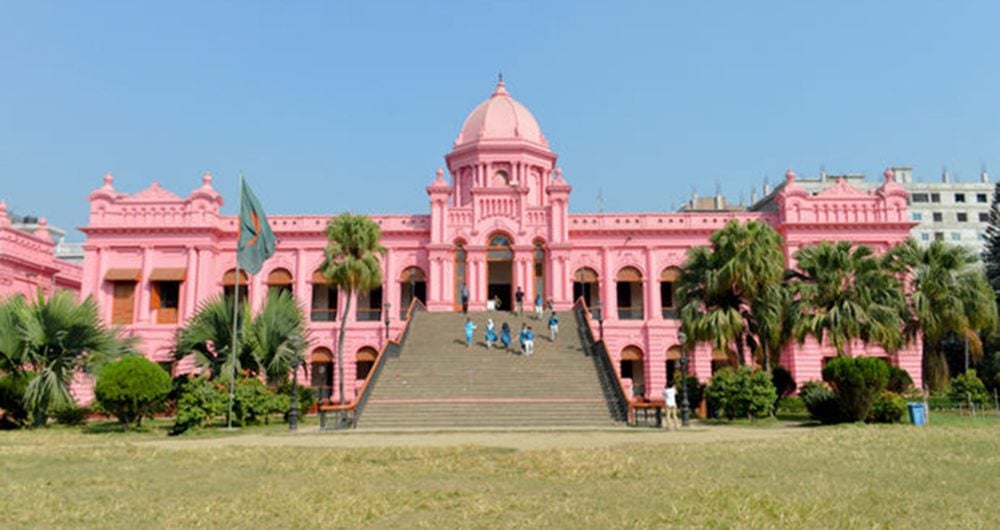 Due to Mughal Empire and British East India Company reign, Bangladesh is full of rich history and resources. The Partition of Bengal and later the Independence from Pakistan has left Bangladesh with diverse culture, awakening and rebellious nation. Today, we have found out the Top 10 Historical Places in Bangladesh.

The 17th century Mughal fort which stands by the Buriganga River is one of the oldest architecture of Bangladesh. It was built by the then Mughal Subahdar Muhammad Azam Shah, son of Emperor Aurangzeb. It is believed that the construction of the fort was never completed.

The fort consists of 3 frameworks – (i) ‘Diwan-I-Aam’ which was the residence of the Governor, (ii) a mosque and (iii) the tomb of Bibi Pari who was the daughter of Emperor Saista Khan.

Interestingly, there are some mysteries around this fort. There are tunnels underneath the fort which lead to the other side of the river. During the Sepoy Revolution of 1857, many soldiers tried to flee through those tunnels and died. Few British soldiers who followed them there, did not return. In fact, to investigate the situation, the researchers sent an elephant and a dog to those tunnels who didn’t come back as well. Soon after that horrific incident, the path was sealed.

Initially, it was a vacation house for a Zamindar of Jamalpur district, Sheikh Enayet Ullah. After his death, his son sold this property to the French traders in 1740. They dug a pond in front of the building where fresh water could be fetched. After having a great business in the subcontinent for almost a century, they surrendered under the full British power and sold all of their properties. So, in 1830, Khwaja Alimullah – an established man in Dhaka bought the property. He added a mosque in this compound. After his death, his son Khwaja Abdul Gani made some progressive look to the property and named it “Ahsan Manzil” after his son Ahsan Ullah.

In 1985, Dhaka National Museum obtained this property and made it a museum after a long restoration process.

The Palace is divided into 2 sides. ‘Rangmahal’ is at the eastern side. It was the entertainment spot where foreign and local girls used to dance and sing for the main owner Enayet Ullah. The Ballroom was also there at this portion. The Western side has living room, dining room, a library, card room and guest rooms. The Building is front-faced by the mighty Buriganga River.

The architecture and the decoration epitomize the Mughal taste perfectly.

The city is located in Sonargaon of Narayanganj, just beside the capital, Dhaka. The ancient architecture of Mughal period is found here. Baro-Bhuiyans used to rule here. It was within the capital in that time. As a capital, Sonargaon was enriched with architectural beauties. Numerous British Colonial monuments and forts are seen across this 20km area.

It is one of the most visited tourist spots in Bangladesh.

Francis Buchanan Hamilton, a Physician, first discovered this place in 1808. However, he made some significant contributions as a Geographer during his stay in Indian subcontinent. It is the last remaining piece of a village ‘Pundranagara’ of that time. The village was alive until the 8th century AD.

This area is now preserved with nice natural hilly look to enjoy leisure. People from everywhere come to spend some quiet time here with natural serenity.

Shat Gambuj Masjid or the Sixty Dome Mosque resides in the city of mosque, Bagerhat of Khulna division. It’s the largest mosque in Bangladesh and registered under the UNESCO World Heritage Site.

Prior to that Saint General Khan Jahan Ali introduced a Muslim Colony at the middle of 15th century and started building numerous mosques. Eventually, this mosque was started building in 1442 and completed by 1459.

A tower is there on each side and 77 low domes are surrounded within those. There are also 60 stoned pillars to support the roof. Along with that there is system for enough ventilation and light which gives a sound feeling.

This mosque is considered the best archeological sign of the subcontinent of that time.

This museum is at Sher-E-Bangla Nagar, Dhaka. It is based on the liberation war and the independence of Bangladesh over Pakistan.

The committee under this authority collected the uniforms, clothes, weapons and documents from liberation war. Also some destroyed machines, air-crafts and remains are there. Some historical letters, contracts are also found where the ‘surrender paper’ of Pakistan is one of those.

Galleries, the main attraction of the museum covers everything from prior to post independence. The language movement, the killing of language martyrs, Mass Uprising of 1969 and then eventually the genocide of the 25th March which is labeled as a dark night in the history of Bangladesh. Pictures of the training of Mukti Bahini and then Mitro Bahini (Bangladesh-India joint force) are also found.

It is the extinct Buddhist religious site in the district of Comilla. It serves a beautiful colonial cemetery as Comilla Cantonment is nearby. The Mainamati Cemetery is a historical memorial with about thousands of graves from Second World War.

Mainamati was the name of a Chandra Queen, mother of Govindachandra who was a ruler of Chandra dynasty. Between the 10th and 11th century, they ruled the Samatata division of Bengal. Currently, this is the part of Comilla, 114 km away from the capital, Dhaka. They used this place to perform their religious activities.

This mosque is based in Armanitola, Dhaka. A very antique mosque built by Mirza Golam Pir at 19th century.

Built in Mughal style, initially, it was a simple rectangular mosque. The roof was crowned by 3 domes and covered with star shaped china clay tiles. These tiles are also seen in the exterior.

Later, on the 20th century, a local businessman named Ali Jahan Bepari renovated the mosque. Started by adding a veranda, he repaired the tiles with mosaic. It was popular decoration by that time. Along with the domes, the exterior and the interior are done with star shaped tiles. That is why the mosque is called Star mosque. In 1987, the Ministry of Religious Affairs of Bangladesh added a new prayer hall which eventually led to 2 additional domes in the mosque.

Shaheed Minar or The Martyr Monument stands near Dhaka Medical College. It is the symbol to remember the language martyrs of 1952 language movement.

You can go flashback to that incident any time. In 1952, due to the more number of Bangla speakers, people protested to make ‘Bangla’ the state language over Urdu. In response, Pakistani police openly fired at the protesters to disassemble their movement. Agonizingly, few students among Dhaka University and Dhaka Medical College died.

Eventually, 21st February, the day of the barbaric incident, is declared as International Mother Language Day. People remember these national heroes with flowers in front of Shaheed Minar on this day.

One of the most beautiful places in Savar, near Dhaka, is the National Memorial. It was founded to recall the memory of the 7 major War Heroes of the Liberation War in 1971.

Bangladeshi Structural Engineer and Architect Syed Mainul Hossain designed this remarkable memorial. The monument consists of 7 different segments which are standing proudly together to represent the 7 War Heroes.

Staggeringly, the complex has the area of 84 acres. National Parade, Scouting Display, Liberation War songs and related programs are displayed here annually, on the victory day, 16th December. Besides, it’s a regular visiting spot for general people all of the time.

It’s all for now about top historical interest in Bangladesh. If you have any suggestion, please inform from the comment section. We are ready to make Bangladesh discoverable from anywhere of the world. Travel Mate Bangladesh is arranging regular tour on different historical sites in Bangladesh. So, if you need support, contact to our team. Thanks for staying with us.  🙂

Sulal Das
Reply
Ahsan Manzil is a very nice place to visit. we should visit this place. Overall this article very informative.

Staff Editor
Reply
Thanks. :) You can also check attractive places of Dhaka City as well.

History maniac
Reply
Why did you miss out Paharpur? It's a world heritage site declared by UNESCO. Please add it to the article.

Nusrat Jahan
Reply
I picked up some really excellent info here. Absolutely worth bookmarking for later. I'm amazed by the amount of work that must have put into constructing such a tremendously informative website.