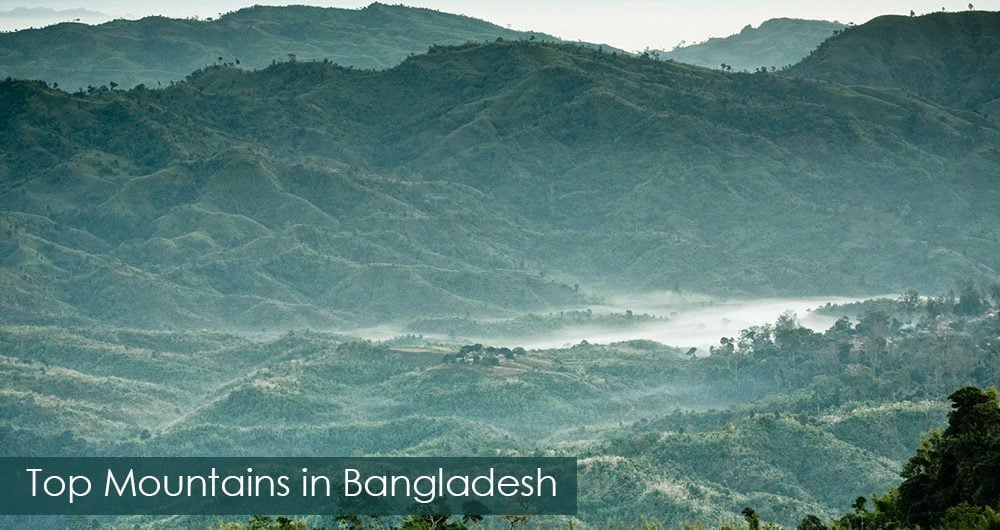 In Bangladesh, there are numerous mountains in the Chittagong Hill Tracts areas. We are blessed with a lot of beautiful mountains in the world. Our world is filled with amazing natural beauties. The mountains make the overall natural landscape outstanding. In this highly researched article, we have tried to give you an overall concept of the highest beautiful peak in Bangladesh. It will help you to make the decision when want to trek on isolated mountains with your friends and family. Similarly, if you love the mountains, there is no chance to miss any of the peaks.

Important to realize, we have considered the scenery, mountains quality and tourist facilities to drive the list. If you are a passionate traveler and want to discover the beauty of the world-class highest mountains in Bangladesh, hopefully, this post will surely help you a lot. With this in mind, if are waiting to take the taste of virtual tour on the mountains and hilly areas of Bangladesh with Travel Mate, let’s start the journey. It will take only 2/3 minutes to complete.

Recommended: Top 15 Islands In Bangladesh, You Should Not Miss! 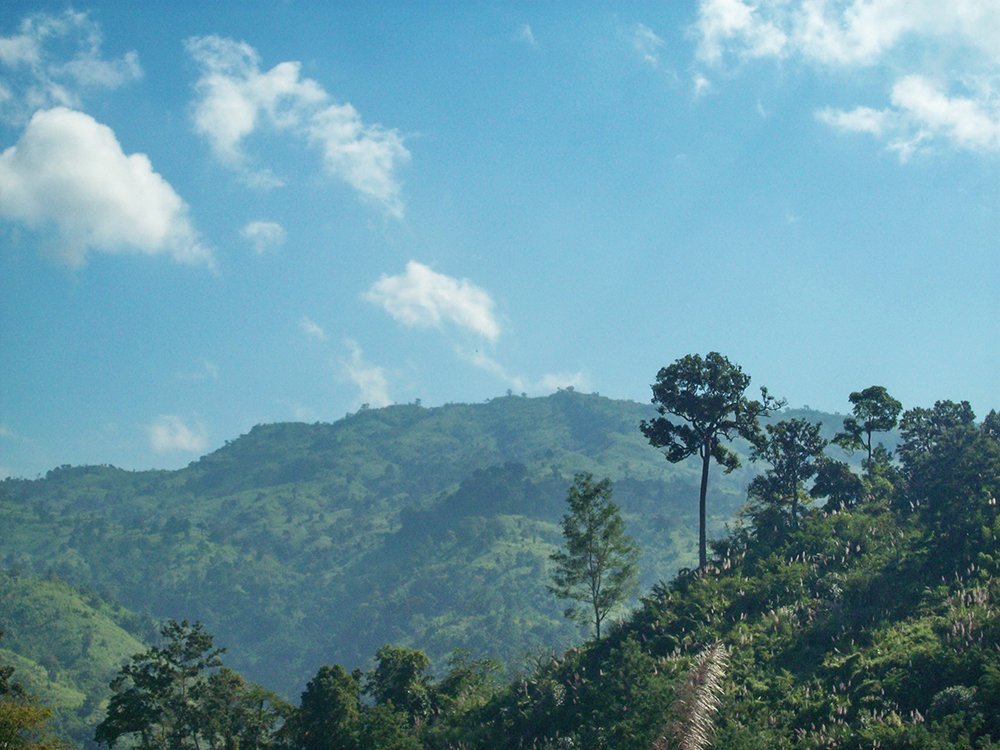 Recommended: Top 15 Sea Beach In Bangladesh, You Should Not Miss!

Sippi Arsuang is one of the highest peaks of Bangladesh, with an estimated height of about 3034 feet, which is the 9th highest peak (Also known as 10th highest peak) in Bangladesh. Sippi Arsuang hill is located in the deepest part of Rowangchhari Upazila of Bandarban district in the Chittagong Hill Tracts. This hill, located in Rowangchhari, may be the ideal trek point for beginners. Comparatively, it takes less time. The trek can be finished just in three days.

It has different names in different tribal languages. The Bom nations say – Sippy, Tanchanga says – Rametang, Marma say – Ramatang, Pangkhwa – Arsuyang which means cock crest. There are many names including Ramjum. The three peaks that can be seen from the Sippi Para where the left side of the south is called Sippi. The middle one is Arsuang. The name of the right peak is Tangkhan Tang. Some even call the Southern peak as Sippi Arsuang. But whatever the name, this hill is known to travelers by the name of Sippi Arsuyang. 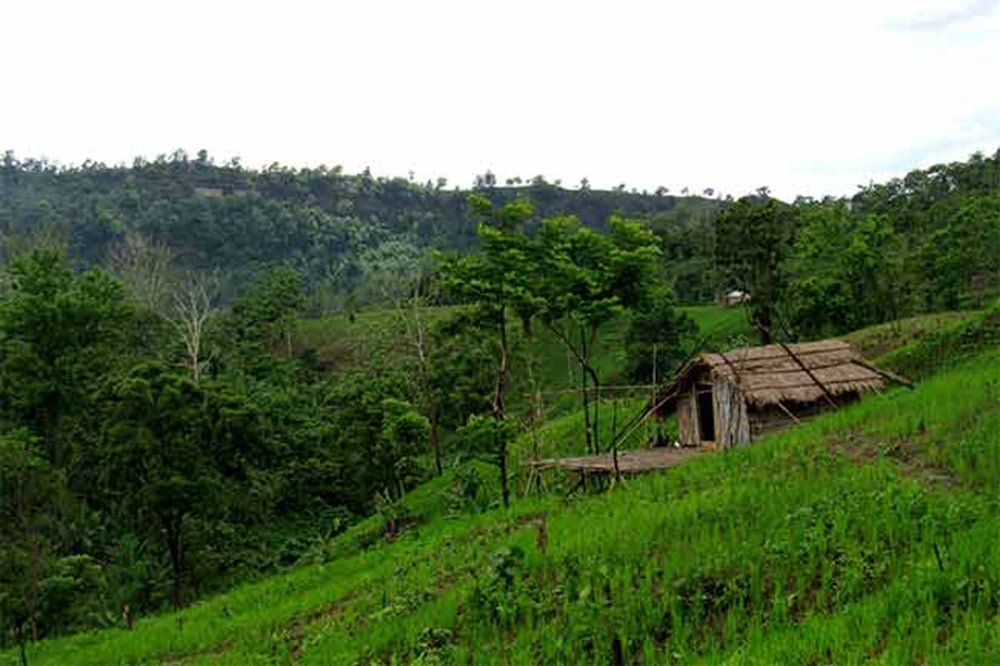 From Sippi, you could see some local tribe Para including Sankhamuni Para. At the British time, it is told there was a British Camp. The local people tell, there are tigers, deer at the side of Sippi. Some of them have caught deer from the forestry area of Sippi. Although no one of them has not seen tigers yet.

Kapital or Capital Mountain is located in Thaikeng para, Ruma, Bandarban. Though the peak is distinctive, it is very beautiful and eye-catching. If you visit this peak, it will be a remarkable day in your life. One of the separatist group who was Mizoram use this peak as the hideout place. They considered the peak of the mountain as their symbol of independent. At a time, they move from this area, although the local people call this peak as Kapital. The height of the peak is measured as 3,094 feet. The Geo position of the Politai range peak is N 21°54’2.58″, E 92°31’26.68″. With the natural environment and forestry surroundings, Kapital Peak is awesome, attracts the travelers always. 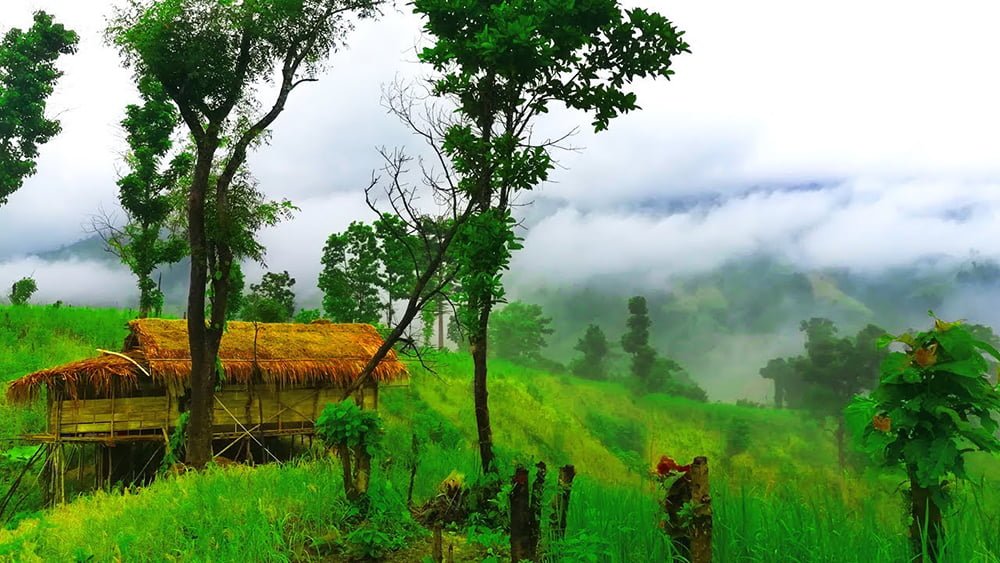 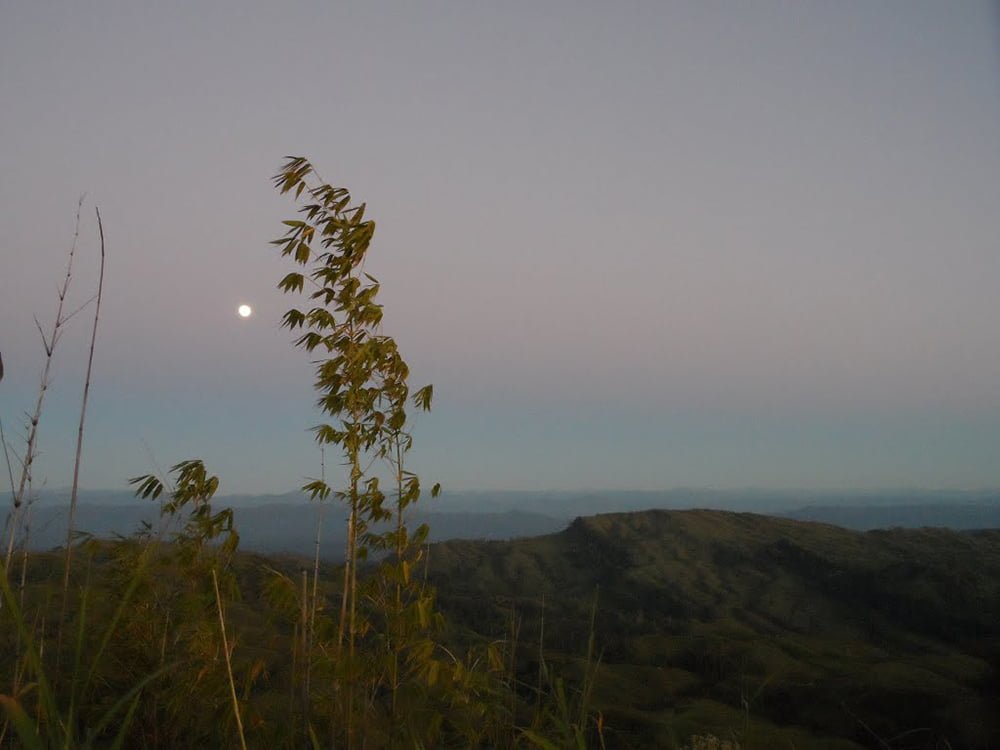 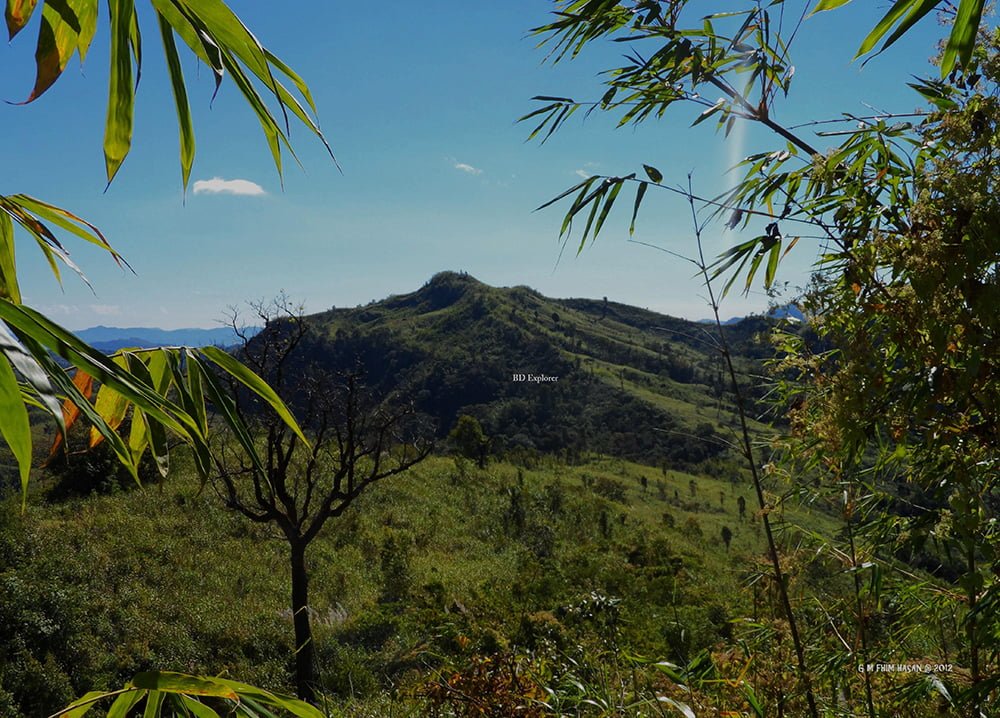 Keokradong is located in the Ruma Upazila of Bandarban. At about 3172 feet high, the mountain was once considered the highest peak in Bangladesh, but in modern ways, it is currently the fifth highest mountain. The name Keokradong comes from the local indigenous language- Marma. In the Marma language, Keokradong means the highest stone hill. From a distance, the summit of Keokradang appears to the skyline. And when you reach the summit, the correlation with the mountain and cloud will attract you as like heaven. 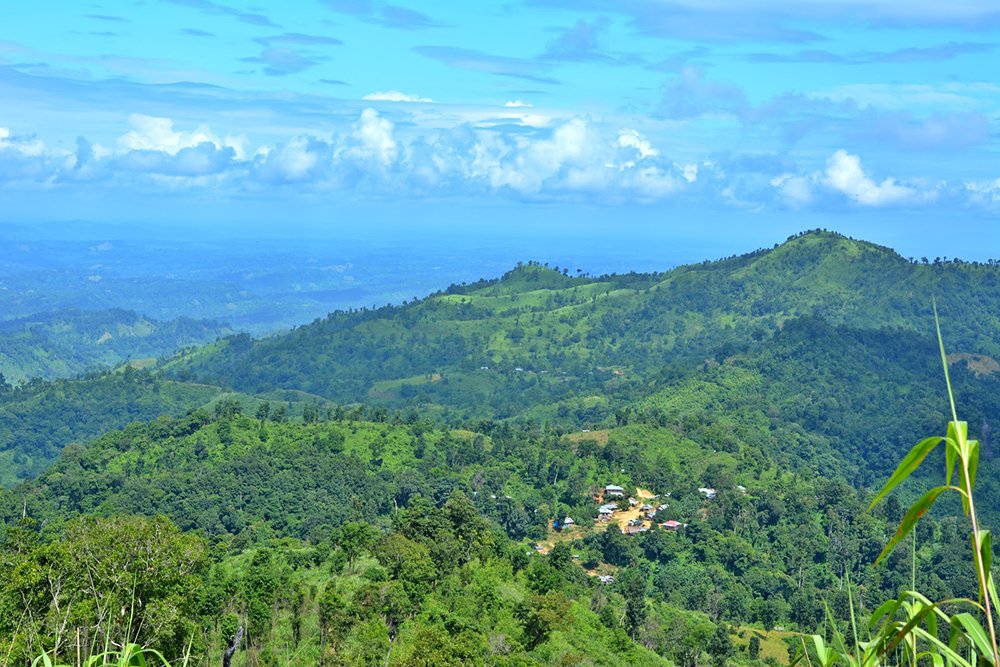 How To Visit Keokradong:

You will find cottages of indigenous people in Keokradong as well as Boga Lake. You can pass the night and will get the meal from them.

Jogi Haphong is located exactly at the side of Bandarban-Myanmar border. The mountain lovers love Jogi Haphong very much. Maybe the beauty and the difficult ways had made it. Important to realize, Jogi Haphong is the 4th highest peak in Bangladesh. The height of Konduk or Jogi Haphong is 983 meters or 3222 feet. 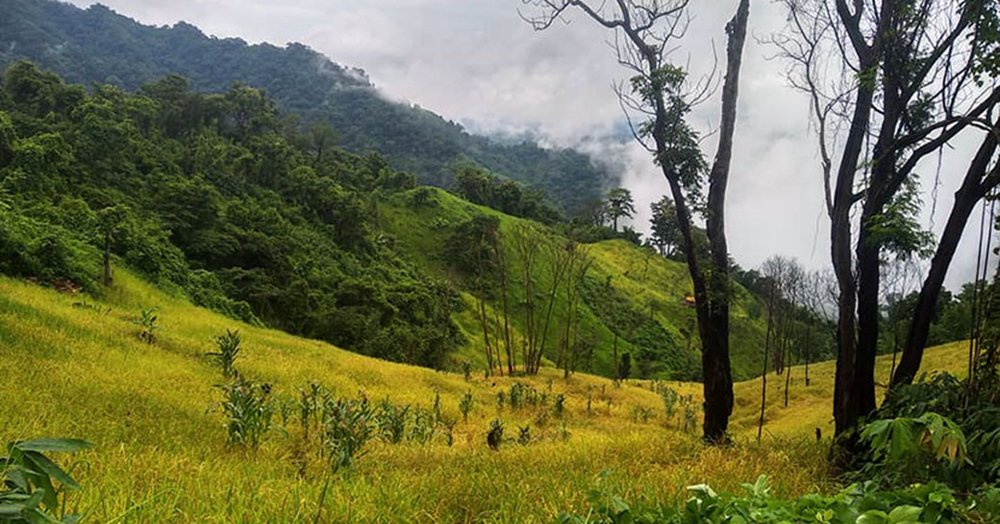 From Bandarban, you have to go to Thanchi by Bus or Jeep first. Then Thanchi to Remakri Bazaar by boat, from there, you will get the path to Dalyan Para for a walk of 3 hours. From Dalyan Para, you can come back within a day from Jogi Haphong Peak. 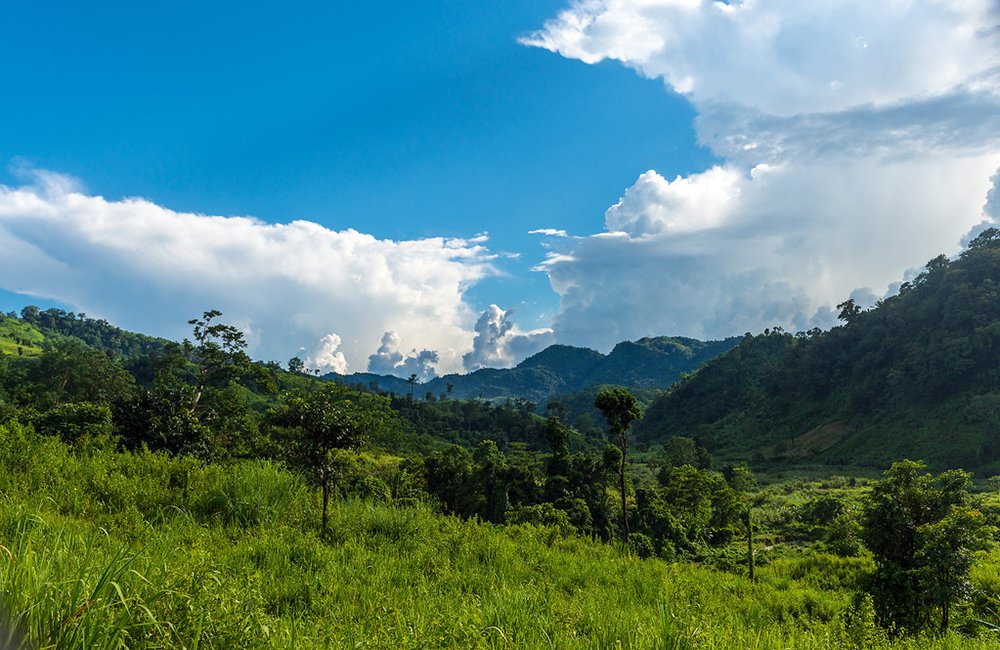 According to Google Earth, it is the second-largest peak in the country. At one time it was called Rangtlang. Local People now call the peak with Dumlong. Mainly, Dumlong is at the side of Zhiriba, a small hill river, which is mixed with the Raikhan River a few kilometers north of the mountain.

How to go
Although Dumlong is in Bilaichhari in Rangamati district, it is very difficult to go to Bilachari because it takes a long time. On the other hand, from Ruma Bazar, it takes only one day. From Bandarban Ruma Bazar, go to Boga Lake. From there one can go and return from Dumlong within a day. There are accommodation facilities at the side of Boga Lake.

How to go
From Bandarban, you will get Bus or Jeep for going to Thanchi. Then you have to go to Remakri Bazaar by boat from Thanchi. It is a 4-hour walk to Dalyan Para. Within a day, from Dalyan Para, you can climb and return from Modok Mual Mountains. 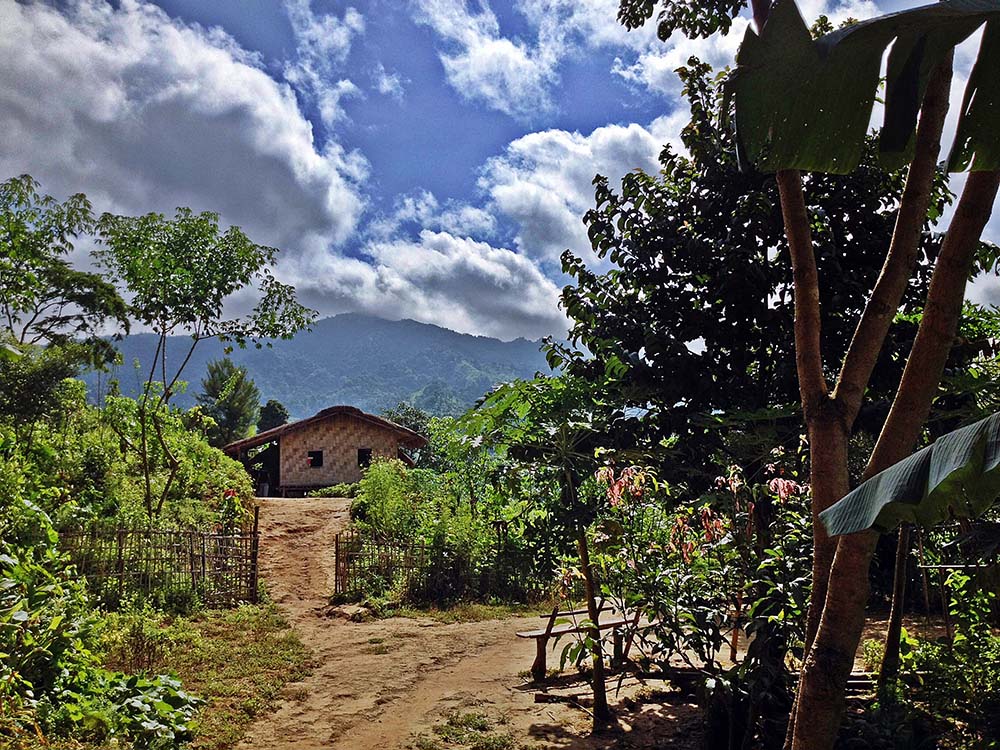 Where to stay
You will find accommodation facilities in the hills of Bandarban. You can take a tent if you want to camp.

Saka Haphong is the highest peak in Bangladesh. It is located in the Bandarban district. Before 2005, it was thought that Keokradong or Tajingdong was the highest peak, but with the digital measurement, now Saka Haphong is declared as the highest peak of Bangladesh. English climber Jing Fleen first climbed this peak in 2005. At that time he measured the height of the peak, 1,064 meters (3,451 feet) and show the position 21 ° 47’11 “U. 92 ° 36’36 “P. / 21.78639 ° N 92.61 ° P. The position is shown by him is exactly identical with its location on the geographical map of Russia. Now it is verified by Google Map and Geographical Map of the USA. 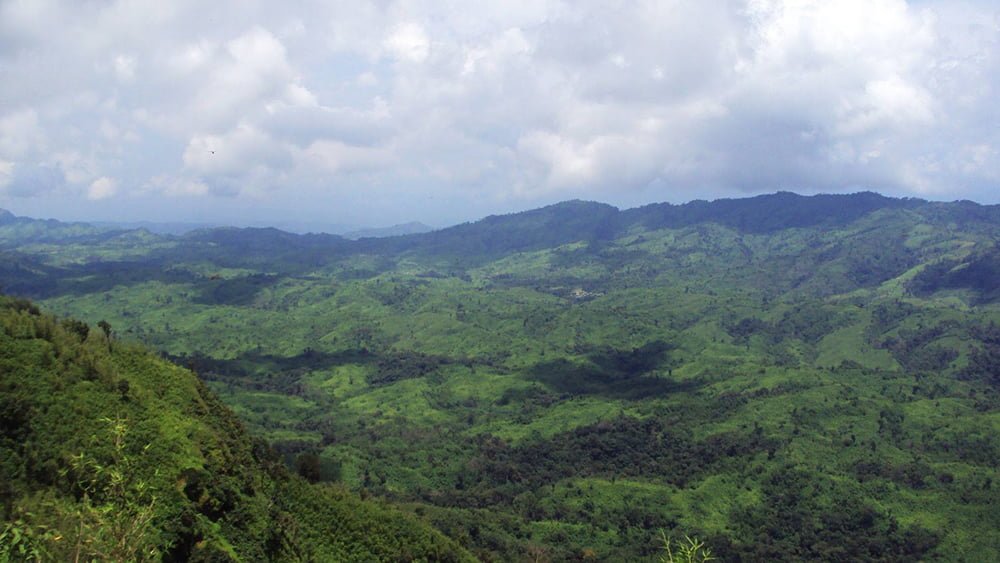 In 2007, the first Bangladeshi team climbed this mountain. The team was led by Yahya Khan and Mount Everest climber Sajal Khaled joined with them. In 2011, two expatriate teams measured the height of Saka Haphong 3,488 feet and 3,461 feet. Then the height of the highest peak was Keokradong (3,120 feet). Now Saka Haphong is mentioned as the Everest of Bangladesh.

If you are an adventure lover and want to travel Saka Haphong, you have to come to Bandarban first. Then you can go to Saka Haphong from three sides – Thanchi, Ruma Bazar and Remakri Bazar.

Some Other Highest Mountains In Bangladesh:

There are some other beautiful mountains in Bangladesh. Some of the peaks need to mention. Let’s see. 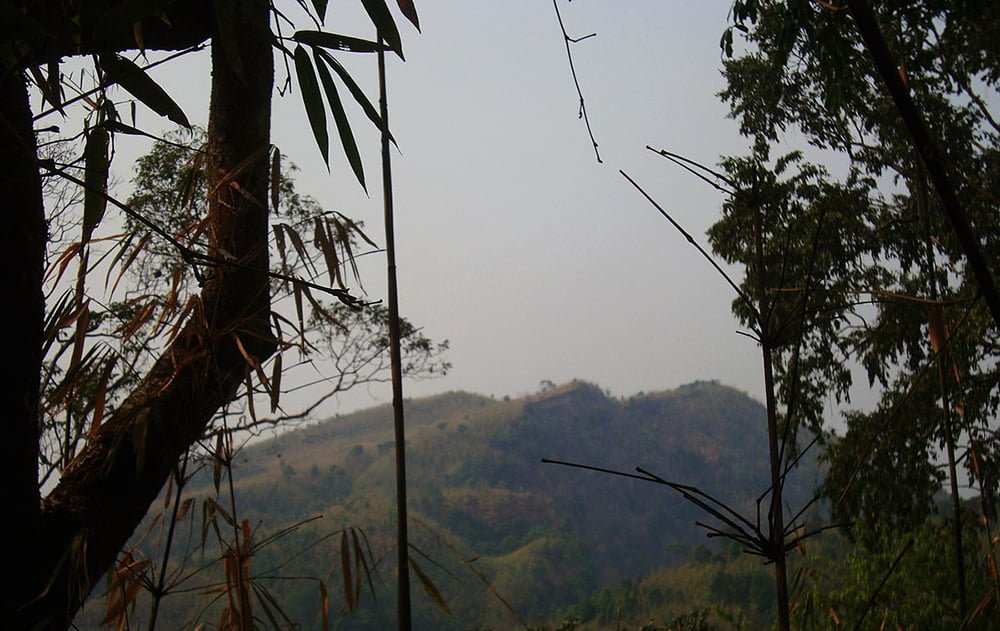 Kreikung Taun is located in Ruma, Bandarban. The mountain is also familiar with Ngaramh Tlang. Kreikung Taun came from Marma Language that means The Hills Like Fish. It is in the Lawmbok row, height is 3,083 feet. The Gro location of the peak is N 21°55.563′, E 092°34.827′. 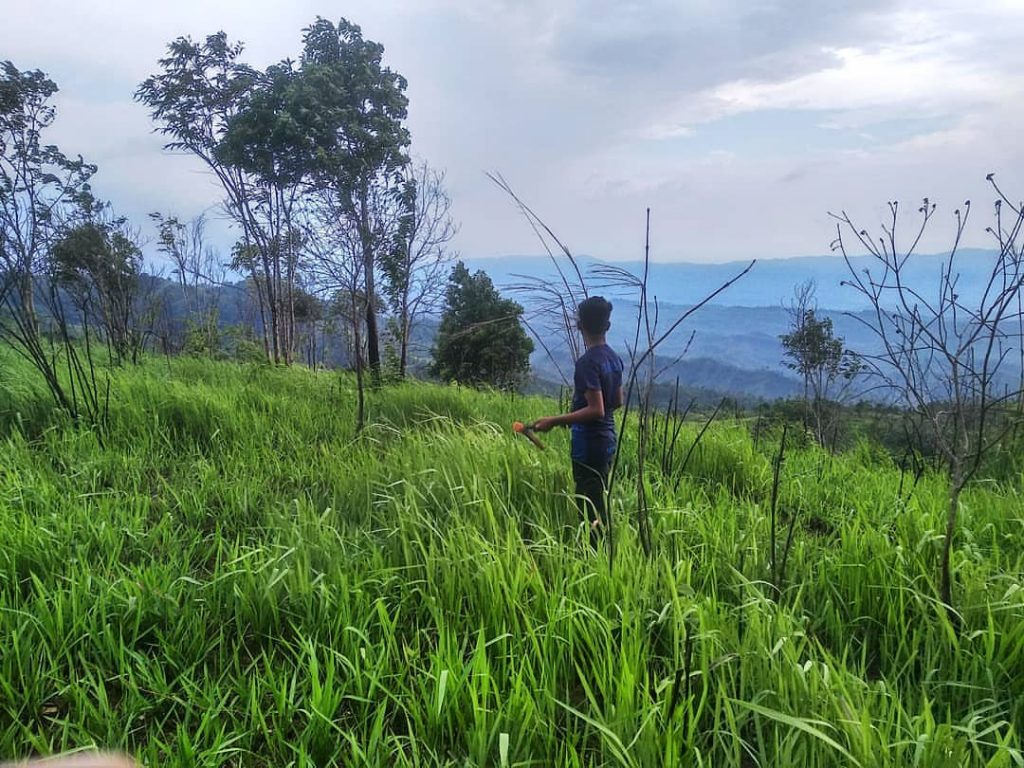 Tinmukh is one of the significant peaks in Bangladesh which is only bordered three countries including Bangladesh, India, and Myanmar. The peak is located between “Mukhra Thuthai Haphong” and “Laisra Haphong”. Mainly, the location of the mountain is in the Belaichori, Rangamati. The height of Tinmatha pillar peak is 2,912 ft. The Geo position of this peak is N21 58.474 E92 36.440 (Range: Reng Tlang). 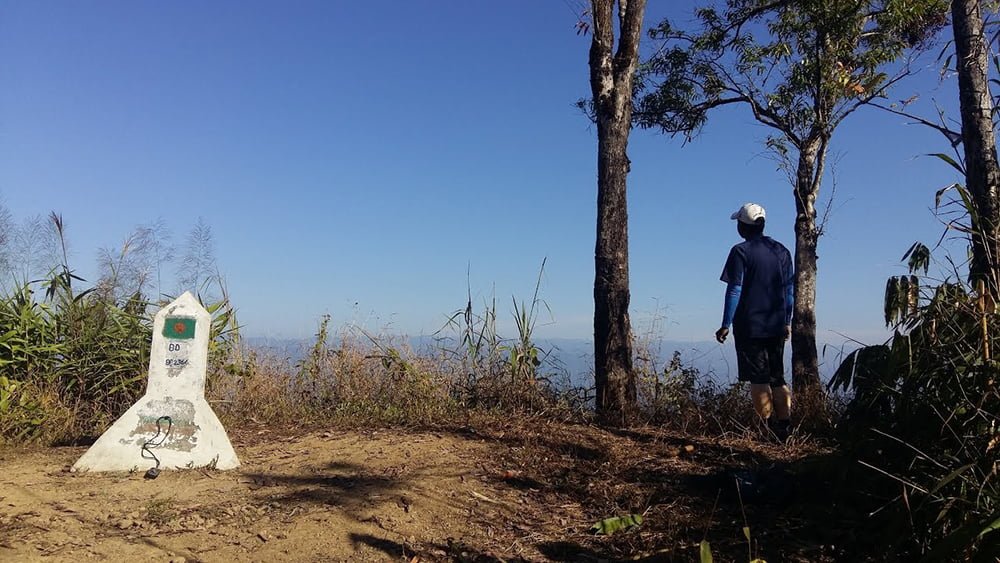 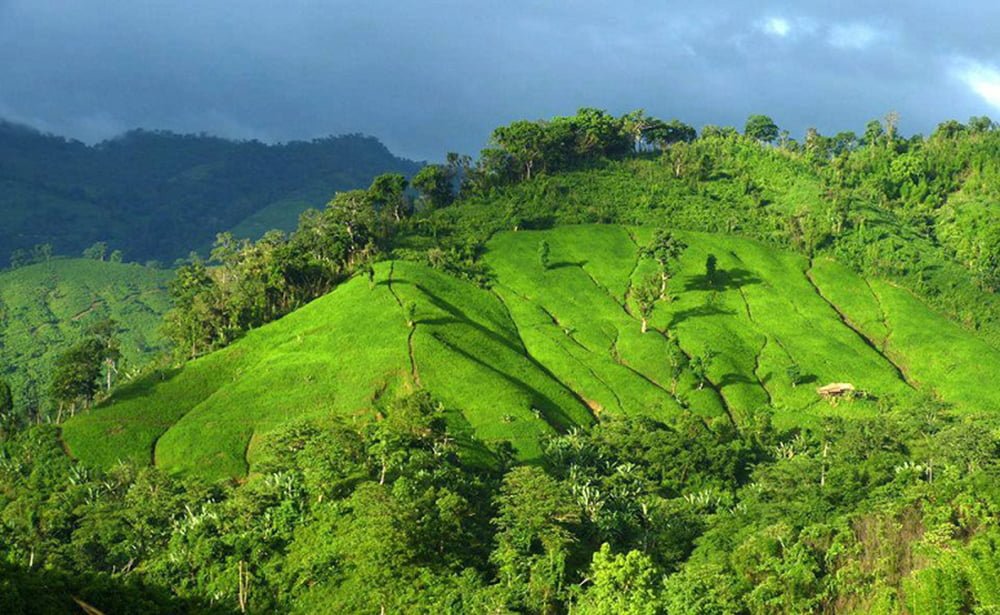 Kris Taung is a mountain in Bandarban District of Bangladesh. The height of this mountain is 857 meters (2812 ft). 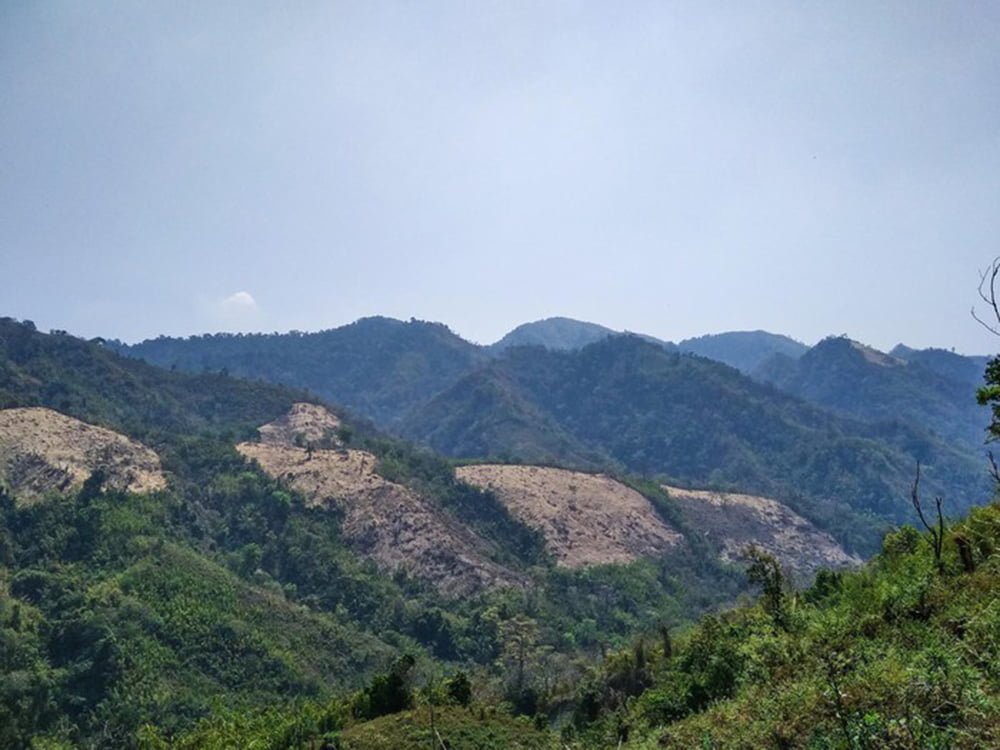 Recommended: Top 15 Waterfalls In Bangladesh, You Should Not Miss!
There are some other small, undiscovered hills and mountains in Bangladesh. If you know any of the mountains that need to mention you may add the information from the comment section. Help our readers by enriching the list of the top mountain of Bangladesh.

Want To Travel The Most Beautiful Mountains in Bangladesh With Your Family or In A Group:

If you are an adventurous lover and want to see the natural beauties, then the mountains of Bangladesh will be the best places for you. In the same way, if you want to make any group tour with your friends or family member, you can contact the Travel Mate team to do the things more attractive and smooth for you. Never forget to share your opinion from the comment section. For further assistance regarding traveling Bangladesh, contact us at any time. Happy Traveling.