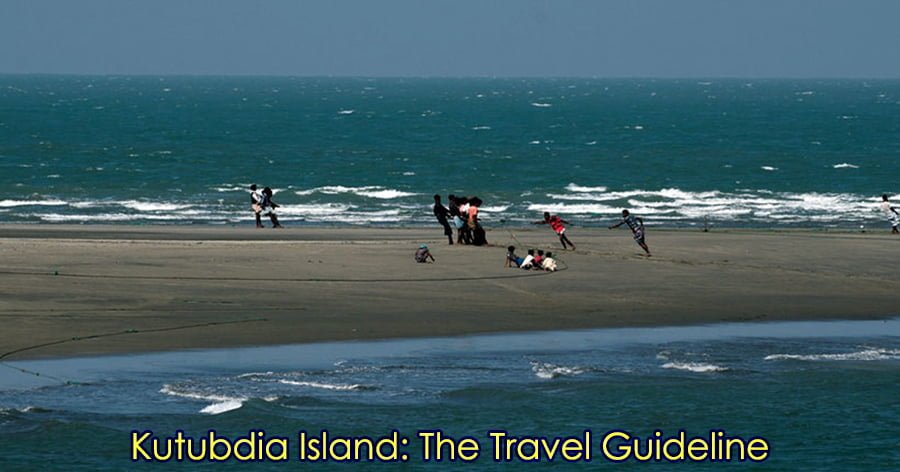 Kutubdia Island (কুতুবদিয়া) is about 166 square kilometers, located in Cox’s Bazar district. This island is full of diversity, has the largest wind power plant in Bangladesh, alongside the beach, the salt cultivation, the lighthouse and the shrine of Qutub Auliya. Though there is no electricity connection on the island of Kutubdia, using generators and solar power, the island fulfills the electricity requirements. Kutubdia Island is one of the attractive islands in Bangladesh.

It is believed that at the end of the fourteenth century, Kutubdia island awakened on the sea. And people started to live on this island in the late fifteenth century. A man named ‘Kutubuddin’ first set up a new house on this island. Later, when the expelled Muslims from Arakan came to the island, Kutubuddin provided them shelter. As a sign of respect, the island was kept ‘Kutubuddin Dia’  in the name of Kutubuddin which was later known as ‘Kutubdia’.

See Also: Sonadia A Island Who Love To Stay Near Nature. Let’s check out the attractive tourist places in Kutubdia Island. The place of interest of Magnama Union is Mahanama Steamer Ghat. 1000/1500 people come here every day. Adjacent to it is a large market. The Magnama Steamer Ghat is well known for going from Dhaka, Chittagong, Cox’s Bazar to Kutubidya.

Kutubdia channel: Kutubdia channel is quite big. The whole year is quite rusty, but it is fairly calm in winter. From the Magnamma Ghat, you need to pass this channel to reach the island.

Kutubdia Sea Beach: Kutubdia’s beach is about 16 kilometers long from north to south. Most of the areas are quite solitary. There is a very little tourist in Kutubdia Sea Beach. Occasionally you will only find the activities of fishermen. Somewhere along the beach, there is a row of trees. Another main feature of the Kutubdia beach is that there is a lot of sea birds roaming around there. On the occasion of solitude, somewhere in the beach, some red crab teams roam around fearlessly. Kutubdia beach is the ideal place to see the sunset scenes.

Wind Power Plant: The largest wind power station in Bangladesh is located in Kutubdia Island. About 1,000-kilowatt power plants have been set up at the southern end of the beach, in Ali Akbar’s Dell area.

Lighthouse: A lighthouse that was built in Kutubdia a long time ago, to show the way of the sailors of the seafaring ship. The old lighthouse was dissolved in the sea a long time ago. However, at the time of low tide, the ruins of the lighthouse are sometimes seen to rise. The new lighthouse that was built in the old lighthouse area now shows the way to the sailors. The position of the present lighthouse is far from some distance to the north side of the beach in Baroghop Bazar. With the stone foundation, the height of the Kutubdia Lighthouse was about 40 meters. There was six room/deck, and the stairs were made with wood.  In the top room, an eight-fitted lamp was established. The fuel of the lamp was coconut oil. The ground floor of the lighthouse was under the ground and its walls were very thick. Qutb Awali Darbar: Durbar Sharif of Qutub Awali is located in the Dhurang area of ​​the island. Shah Abdul Malek al-Qutbi who was born here in 1911, the founder of this Durbar Sharif. He died on February 11, 2000. 7 Falgun, every year thousands of devotees come here to observe the day.  It is said that Kutubdia was named after the ancestors of Kutub Awali. Currently, his son Shahjada Sheikh Farid is in charge of the Qutb Awali Darbar Sharif.

Salt Cultivation: In the winter season, the salt is cultivated in the land of Kutubdia. During this time you could see the farmers are engaged in salt cultivation. However, most salt cultivated fields are found in Tabela Char, Kaiser Bill, Ali Akbar’s Dell. The natural techniques of salt production can be seen here.

Read More About Top 15 Sea Beaches In Bangladesh You Will Love!

How To Go Kutubdia:

There are many ways for visiting Kutubdia, for example, you can go from Dhaka, Chittagong, Cox’s Bazar as well as from Chakaria.

If you want to go to Kutudia from Dhaka then you will have to go to the bus stand of Chakaria Upazila of Cox’s Bazar and then start for Kutubdia from Mognama Ghat.  There are a lot of AC /non-AC buses that go every day from Dhaka to Chakaria (Cox’s Bazar) including Sohag Paribahan, T.R. Travels, Green Line Paribahan, Hanif Enterprise, St. Martin’s Paribahan, Saudi Paribahan, S. Alam, Shyamoli, Unique, Eagle, etc.

From Chakaria Bus Stand, you can go to Mognama Ghat with local CNG. It will take 40 to 50 minutes. Then you can easily go to Kutubdia Ghat in the waterways using Engine Boat or Speed Boat via Kutubdia Channel. With Speed Boat, you can also land on the Boroghop Bazar Ghat or Durbar Sharif Ghat. According to your plan, you can go any of the Ghat.

If you want- you can make a one-day tour plan to Kutubdia. Yes! It is possible. If you can start early in morning from Chittagong, it is possible to finish watching within the day time. It will take 6 to 7 hours for up and down jorney from Chittagong to Kutubdia. You can easily watch the beauty of Kutubdia rest of the time. The Plan can be Boroghop Bazar to wind power station to Darbar Sharif to Lighthouse. Don’t waste the time and talk with the local people when the last speed boat left Kutubdia. It will help you to pass the time without anxiety.

Where Will You Stay:

For the tourists, in the Boroghop Bazar, you will find a friendly hotel named Hotel Somudro Bilash. It is a fantastic hotel as it is very close to the sea, so you can easily enjoy the sea sitting in your room.

On the other hand, Kutubdia Island is very ideal for camping. Many people chose this island for camping in solitude near the beach. There is no problem with security. Nevertheless, you can talk to the local people for getting extra support. Where Will You Eat:

Though there is no very good restaurant, you will get fresh food at an affordable cost with dry fish, Bharta, Various kinds of fish and meat in the local hotels in Kutubdia. You can check Boroghop Bazar for quality foods as well.

Although the process of formation of Kutubdia Island began for a long time, the island awoke from the sea chest towards the end of the fourteenth century. The island is thought to have been inhabited by humans in the late fifteenth century. Ali Akbar, Ali Fakir, a camel named Hazrat Qutbuddin, along with some of his companions, drove out the Mughal Portuguese and settled on the island. On the other hand, the Muslims fleeing from Arakan started coming to the island from the vicinity of Chittagong in search of fortune. According to the survey, most of the ancestors came from Anwara, Banshkhali, Satkania, Patia and Chakaria areas. The persecuted Muslims named the island after Qutbuddin in homage to Qutbuddin, “Qutbuddin’s Diya”, later renamed Qutbuddin. The island is locally called Dia or Dia.

Want To Make A Safe And Secure Group/Family Tour To Kutubdia?

Kutubdia Island (কুতুবদিয়া দ্বীপ) is a perfect place for a group or family tour. The beauty of this place will give you awesome feelings. At the same time, you can come back within a day by visiting here. Hopefully, you can go to Kutubdia Island within a tight budget. If you want to travel Kutubdia Island with safety and want to enjoy the place with more joy, Travel Mate can help you with arranging the tour. Contact us for further details. Above all, you may add any missing information from the comment section about Kutubdia. Happy Traveling. 🙂