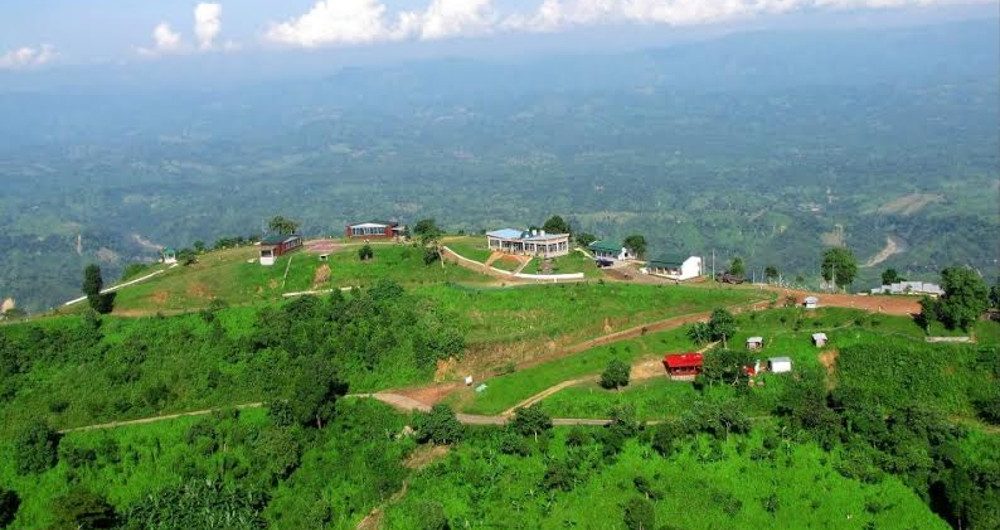 The Chimbuk hills Or Pahar (চিম্বুক পাহাড়) of Bandarban, known as Darjeeling in Bengal. Chimbuk is the third largest mountain in Bangladesh. Chimbuk is a well-known name all over the country. Chimbuk hill is located 26-28 km from Bandarban district town. It is about 2500 feet above sea level. The view of the hills on both sides of the road to Chimbuk is very beautiful. On the way, Sangu river falls in sight. When you go through the highest road of Bangladesh in the middle of the mountains, you will feel that you are crossing the moon by car. Standing at an altitude of 2500 feet, you will see this amazing natural landscape of Chimbuk. Standing on the hill, you will see the raft of clouds floating down. The surrounding districts of Cox’s Bazar and various upazilas of Chittagong can be seen from here. In the rainy season, looking at the clouds floating along the side of the hill, it seems that Chimbuk is the paradise of clouds.

The view of sunset and sunrise from this hill will fascinate any tourist. In the rainy season, strong clouds like Sajek can be seen flying from Chimbuk hill, and if you are lucky, you can reach out and touch the clouds. Besides, on the way to Chimbuk hill, you can see the Milonchhori and Shoilo Propat Jhorna. And if you want to go to Nilgiri, the location of Chimbuk is on the way to Nilgiri. Nilgiri is 20 km further from Chimbuk.

As Chimbuk is located in the remote hilly area of ​​Thanchi Road, no hotel or restaurant has been built here. There is a resthouse under the supervision of the Deputy Commissioner. There is an opportunity to spend the night with the permission of the Deputy Commissioner. There is an army canteen next to Chimbuk. Breakfast and lunch are available here. Besides, there are two tourist centers named Milnachhari and Shakura on the way from Bandarban to Chimbuk for food. However, it is best to leave Bandarban with light food and other essentials.

You can contact Travel Mate for Chimbuk Tour Packages, Hotels, Bus Tickets, Air Tickets or any corporate or event or family trip. or Call +88 01766-99-0725

How To Go To Chimbuk Hill:

You have to come Bandarban first. It is 26km away from the Bandarban city.

If you want to go to Chimbuk, no matter where you are in the country, you have to come Bandarban first. You can reach Bandarban directly by bus from Dhaka. Buses of Shyamoli, Saudia, S. Alam, Unique, St. Martin Paribahan and Hanif from different places in Dhaka leave for Bandarban. The fare of these buses per person is non AC BDT 550 and AC BDT 950 respectively. If you leave at 9-10 pm, you will reach Bandarban by 8 am. Besides, you can go by train or air from Dhaka to Chittagong and from there to Bandarban. 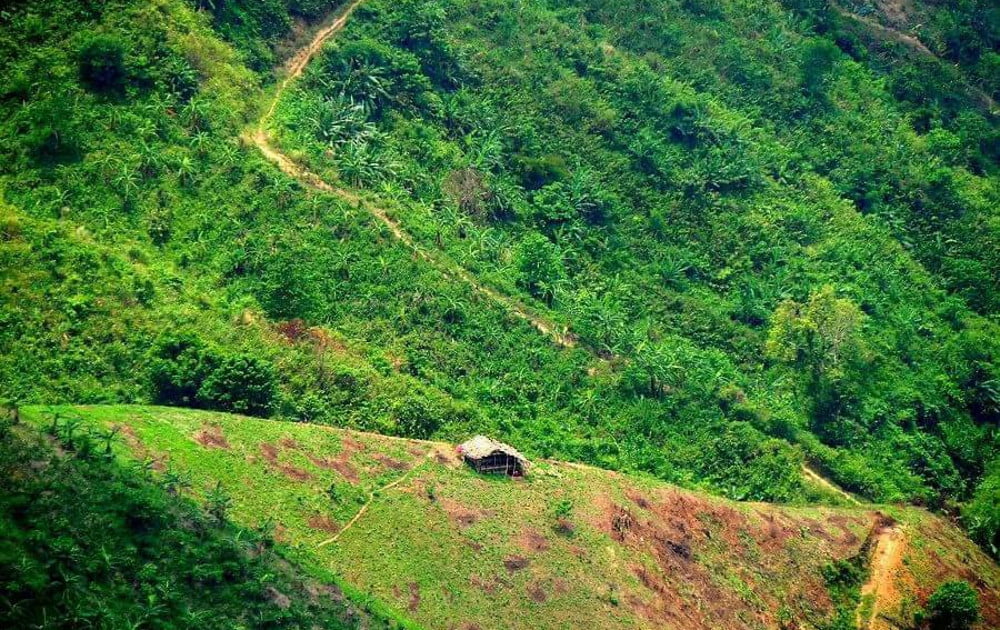 From Bandarban district town bus stand you can rent a car, jeep or CNG to reach Chimbuk. It will take about 1 hour and 30 minutes to reach from Bandarban city. In this case, it is important to remember that no vehicles will run on Chimbuk-Thanchi route after 4 pm. So if you want to go to Chimbuk hill, you have to go before the time. Usually tourists rent a car to visit Chimbuk, Nilgiris, Milonchhori and Shoilo Propat Jhorna together. Talk to Travel Mate for further details about the easy route plan.

Where To Stay At Chimbuk Pahar:

Due to the hilly terrain and inaccessibility, there is no hotel in Chimbuk. However, a rest house is being run under the supervision of the deputy commissioner. But further away from Chimbuk tourism there is the Nilgiris or the previously luxurious Sairu resort. There are several residential hotels and resorts of different standards in the Bandarban district town of if you want you can stay here at low cost. You can stay in these hotels and resorts for 700 to 3 thousand Taka per night. Find out more about Bandarban Resorts and Hotels from here. 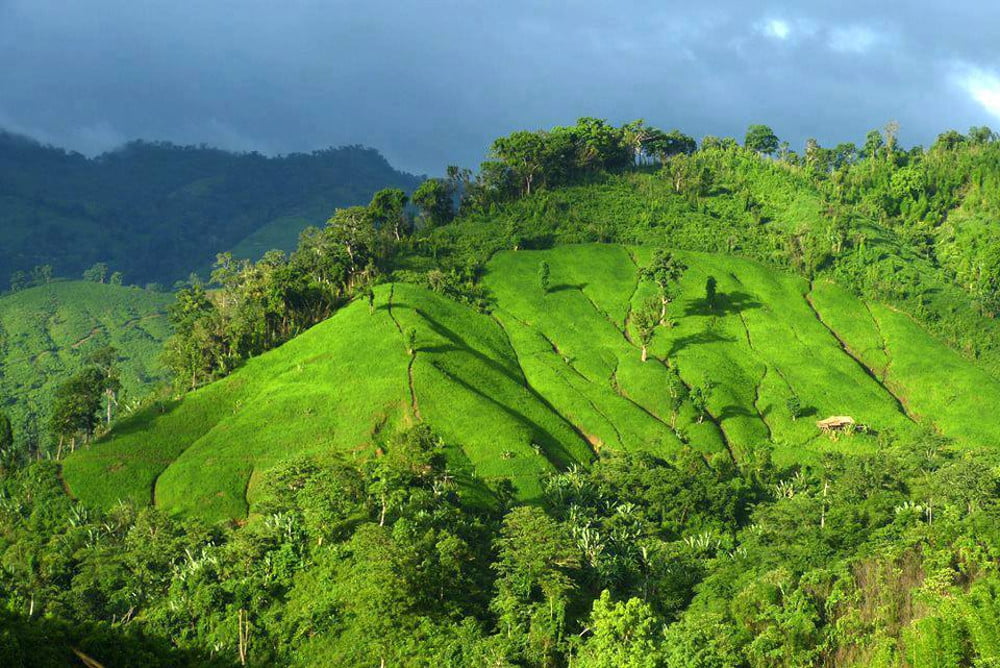 Where To Eat At Chimbuk:

There is a canteen run by the Army on the side of Chimbuk hill. This canteen offers breakfast and lunch. There is also a tribal food hotel in front of the Chimbuk tourist center. If you tell them in advance, they will arrange lunch.

Chimbuk – At A Glance

At one time the common people of Bangladesh had the idea that high mountain means Chimbuk. And if you want to see what the mountains are, you have to go to Bandarban, the lifeblood of tourism in the three hill districts. Chimbuk was called the Darjeeling of Bengal. Going to a hill from the city means that the name of Chimbuk used to come first.

But the excellence of technology, the indomitable mentality of the trekkers, the strong attraction of the tourists at one time completely lost its splendor in this hill which is 26 kilometers away from the city. Because by that time all the attractions have been attracted by Nilgiri, Nilachal, Keokradong or Saka Haphong.

Recently, the Bandarban district administration has brought back the lost youth of Chimbuk. 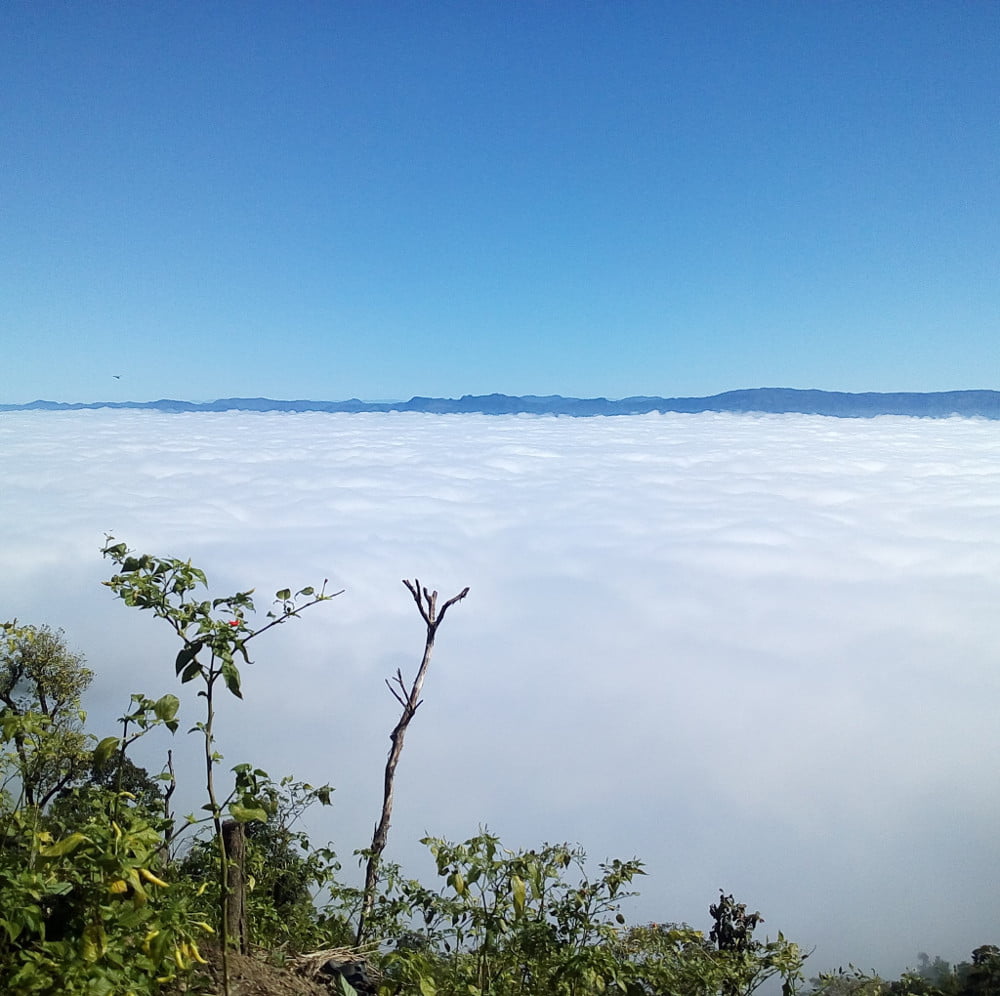 Even two years ago, nothing was visible on Chimbukchura except the tall electricity-telephone tower and a few trees. While standing on this hill, apart from watching sunrise and sunset, the entire mountain range can be seen at 180 degrees.

Really good days are back in Chimbuk. Anyone going for the second time will be amazed to see this neatly arranged hilltop. Any vehicle climbs to the top of the paved road. As soon as he got up, he went down the stairs to the south in a huge courtyard. The square has been named Nobo Chattar. Standing from this view point in autumn is a sea of ​​huge clouds. Even in the scorching heat of summer, the cold wind blows here. The vastness of the mountains and the sky can be enjoyed standing in this courtyard.

There are two small view points on two levels in front of the stairs. If one does not want to go down, one can stand there and enjoy the beauty. There are three lovely concrete chairs and tables on the west side where the stairs end. The shadow of the tree falls on it. There is also a seating arrangement on the east side to chat or enjoy private time in the last afternoon sun.

If you go up the main road, go straight to the road and the rest house of the village. The road has gone north to Thanchi. Nilgiris along the east corner. Beautiful view points have also been built on several levels on the north side. Even if thousands of people come together, the whole Chimbuk will be able to give space.

If anyone wants to live in this attractive environment, there are also arrangements. Anyone contacting the DC office can spend the night at the district administration’s resthouse.

If you spend the night in a rest house, it doesn’t matter if it is a moonlit night. It’s really lucky to see the moon in the open air from the huge view point.

Another specialty of Chimbuk is the fruit of the mountain that matches the twelve months just down the road. Papaya, banana, sugarcane, green coconut, sherifa, orange, plum are available according to the season. However, bananas and papayas are available all year round. All fruits are fresh. Apples are kind of chemical free. Tourists always like to eat these fruits.

The Marmas live at the foot of the hill below Chimbuk. Many of them live around this mountain. They are basically associated with different systems here. Some Burmese and indigenous products are also available here.

Chimbuk hill is now attracting tourists like a magnet for both wandering and staying. There is no fear of security here. Only 26 km road from Bandarban is in good condition. The condition of the Bailey Bridges is also quite fragile. That’s why the 40-minute journey takes about an hour. Excluding this matter, Chimbuk in really attractive places to enjoy with friends and family.

Chimbuk Pahar (চিম্বুক পাহাড়) is a perfect place for a group or family tour. The beauty of this place will give you awesome feelings. At the same time, you can come back within two or three days by visiting here. Hopefully, you can go to Chimbuk within a tight budget. If you want to travel Chimbuk with safety and want to enjoy the place with more joy, Travel Mate can help you with arranging the tour. Contact us for further details. Above all, you may add any missing information from the comment section. Happy Traveling. ♥