Top 10 Places to Visit In Dhaka City (Must Watch)

Top 10 Places to Visit In Dhaka City (Must Watch) 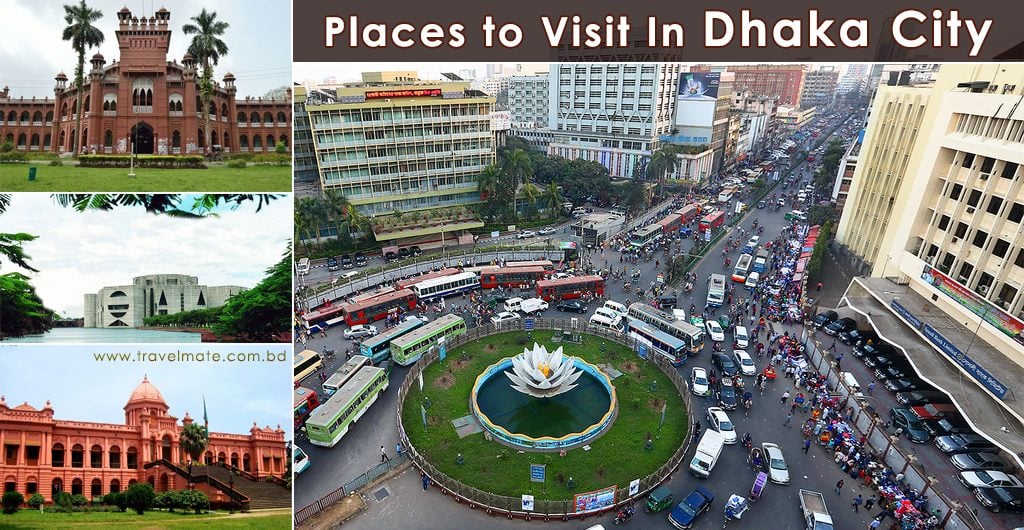 Dhaka is an ancient city in the world. It was one the capital of Indian subcontinent. In general, it is a city of more than 20 Million people. Dhaka is recorded as the most corrupted, polluted, as well as not liveable country. For this reason, the tourist may avoid the country with fear. In general, the people of Bangladesh are very cordial and if you visit this country, you will be amazed by the historical and cultural interest of Dhaka city. At the same time, it is completely safe for the tourist. With this in mind, when you will come to visit Bangladesh, you should visit at least one day to see this ancient and historical city. The city is covered with some amazing ancient precedent. Let’s point out some amazing places in Dhaka city.

With the historical point and cultural innovation, Dhaka is one of the top tourist destinations in Bangladesh. Let’s talk about some important places in Dhaka City. I will suggest you to read the post of Things to Do in Dhaka city as well.

In the 18th century, Sheikh Enayet Ullah built this spectacular ‘pink palace‘ as his summer house. His son sold it to the French merchants. At last, a rich man of old Dhaka named  Nawab Khaja Alimullah bought it (1935). After passing time, in 1872 his son Nawab Abdul Gani rebuild it and named as Ahsan Manzil. In particular, it is located at the bay of Buriganga in Islampur (Old Dhaka). Furthermore, this is a large palace from the Mughal period. In addition, if you want to see the lifestyle and amazing sign of the Mughal period, you can visit this place.

Equally important, it is an over-crowded place with visitors. Identically, Buriganga river is just south of this palace. When entering the palace, you will see various types of flowers on the side of the road. Red, blue, or purple colors flowers will surely impress you. In the front side, you will find a large playground with a green garden. In the middle, the big stairs for entering the palace is really prodigious. The amazing infrastructure, the skull of Nawab’s favorite elephant, the family portraits of the Nawab and the environment will surely astound you.

You can contact Travel Mate for Dhaka City Tour Packages, Hotels, Bus Tickets, Air Tickets or any corporate or event or family trip. or Call +88 01766-99-0725. The parliament house is one of the finest architectural landmarks of Bangladesh. In 1963, a renowned American architect named Louis Khan designs the building. On the contrary, the National Assembly Building is an interesting place to pass the time and watching the beauty of the surrounding places. Important to realize, you will need to show the VISA on the passport to enter the inside of the building. In some cases, you may not get permission. Surely, you can enjoy the surroundings and it is so startling. In the backside of the National Assembly buildings, a public park is situated named Chandrima (Zia) Uddyan. You can also pass some time here. Crescent Lake has surrounded the buildings. At the side of the lake, and Chandrima Uddyan has made the place outstanding. Lalbagh Fort which is located in Lalbagh of Old Dhaka. Specifically, Emperor Aurangzeb planned and instructed to build the Lalbagh Fort. In 1677 his son Mughal Subahdar Muhammad Azam started the work of building the fort. Then It was named Aurangabad Fort. At last, Shaista Khan continued the work. Accidentally, the death of his daughter keep the work unfinished. With this incidence, the name also was changed as Lalbagh Fort. It gets the popularity with this name.

The most fascinating area in this fort is the living and meeting place of Emporer Shaista Khan. Now, it is used as the museum. There are three main gates in the fort. But for unknown reasons, two gates are closed now. Visiting Lalbagh Fort, the visitors can enjoy the architectural beauty of Mughal times. Sadarghat is a busy area in the old Dhaka. To be sure, the people are leaving and entering using this Ghat from the launch. At least 200 hundred launches use this terminal for departure and arrival from different places. You will see a lot of street hawkers who are selling various types of items. In general, it is one of the entering points of the Dhaka city for the people Barishal, Khulna, and Chittagong division. As a traveler, you can ride the boat to watching the surrounding views. Truly, the Sardarghat is the true nature of actual Dhakaiya people. For a busy terminal of the city, you may need to wait some times for riding a boat. Surely, it will be a great experience as a traveler in your life. Dhakeshwari Temple is one of the significant places for the community of Hinduism. It is also a cultural heritage site in Bangladesh. Generally, the Dhakeshwari refers to the “Goddess of Dhaka” according to the Hindu community. It is located in the Dhakeshwari road of Old Dhaka near Ajimpur and Dhaka University. It is one of the prestigious places of the Hindu people and they consider it as the place of Durga. To point out, the name has also come from the idol of Durga. As the origin of the temple, it is thought that Ballal Sen started to build it. It is a three-roomed structured building and the Hindu community from all over Dhaka comes here for Puja-Archona. A lot of people come here for visiting the place and watching the beauty of this ancient temple. Martyred Intellectuals Memorial (Rayer Bazar Bodhyo Bhumi) was built with the memory of martyred intellectuals of the Bangladesh Liberation War. It was designed by the legend architect Farid U Ahmed and Jami Al Shafi. In the 25th March and 14th December, the Pakistani Army killed the most intellectuals persons in Bangladesh to make the country lame. The loss is huge and it is not possible to get back. Some of the honorable persons among them are Munier Chowdhury, Mufazzal Haider Chaudhury, Shahidullah Kaiser, Altaf Mahmud, Govinda Chandra Dev and many more. If you go to this place, surely it will give you an amazing feeling. It is located in the Reyer Bazar of Mohammadpur Thana.

The national museum has kept all the memories of growing up of Bangladesh over the ages. In 1913, today’s national museum started its journey as a Dhaka Museum in a room of Dhaka Medical College. It was refurbished in 1983 and kept opened for all with more attraction. It is located on the south side of Bangabandhu Sheikh Mujib Medical University. There are 46 Gallery with up to 83 thousands of Monuments and ideograph. It has a rich collection of sculptures and paintings at different times. At the same time, the collection of old coins, metal images, books on art, silver filigree attract visitors. It is open every day except Thursday and the Govt. holiday. Not to mention, the National Museum is also opened in the special days including 21st February, Pahela Boishakh (14th April) as well as some other important days of Bangladesh. National Botanical Garden of Bangladesh is located at the side Dhaka Zoo with 205 acres of land. With attention to, it was established in 1961 for reserving nature and plants. It is one of the largest plant conservation center in Bangladesh. It is a great place of varieties botanical riches. Moreover, 50,000 plants and 1200 species of trees have made the garden outstanding among the world. The most interesting part of this botanical garden is the rose garden. Important to realize, the National Botanical Garden is open for all. Not to mention, It is the adjacent point of Dhaka Zoo. So, I will recommend watching Dhaka Zoo when visiting the Botanical Garden. Surely, it will increase the enjoyment of watching the animals and the botanical garden at the same time. Important to realize, it will be a day-long tour to finish watching the Dhaka Zoo and National Botanical Garden. Lord Curzon Hall of Dhaka University is one of the finest architectural building from the British period. It was established in 1904 by Lord Curzon. In the next year, Bengal was partitioned with East Bengal and Assam. Then Dhaka was declared as the capital. From 1911 Curzon Hall was used as the campus of Dhaka College. When Dhaka University is formed in 1921 and it became the academic building of the science students. Still, the building is used for the academic purpose of Dhaka University. The architectural beauty of Curzon Hall attracts visitors. The Hall is surrounded by a beautiful garden. It has a large central hall which is used as academic conferences or similar types of things. At the same time, it has some other rooms in the west and lateral wings on the east. The most amazing part of Curzon Hall is that it has a continuous verandah in all the sides of the buildings. You can go here at any time and can sit in the green garden to explore and feel the beauty. Liberation War Museum is located in the Sher-E-Bangla Nagar Thana of Dhaka City. It is mentioned as “Muktijuddho Jadughôr” in Bengal. It bears the history of Liberation war of Bangladesh. In general, it works to keep the memoir of Liberation war of 1971. It was established in Segunbagicha on 22 March 1996. For enriching the archive and increasing the capacity, it was transferred in the Sher-E-Bangla Nagar, Agargaon. Now, it is a place of thousand of liberation war documents archive. At the same time, it has collected many personal belongings and story of the liberation war as well as original artifacts from the war.

11. Other Places to visit in Dhaka City I have pointed only 10 places in the city. As an ancient city like Dhaka has a lot of attraction places. To help you, I have listed some more places in Dhaka city. It will help you to explore some other places. Hope you have enjoyed reading the article about the top attractions places in Dhaka City. In the meantime, when are you planning to visit Dhaka city? It will be a great journey in your life. Surely, I will wait for your review. Another key point, if you are planning to travel to Bangladesh, Travel Mate team can help you with all the perspectives. Surely, it will enhance your enjoyment in the travel. Then again, if I miss any important places you have visited, inform us from the comment section. To the end, all the best and advance welcome to the city of hospitality.

Beauty of Zinda Park – Chitrokotha
Reply
[…] very close to Dhaka, it is also appreciated as a picnic spot. The park has several bungalows for the convenience of […]