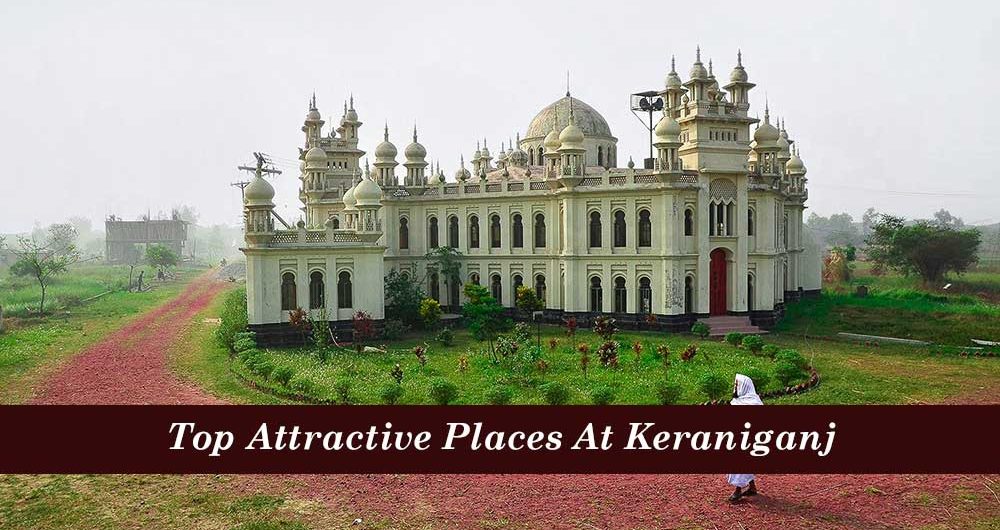 There are wonderful places inside Dhaka where you can visit with family and friends in one day. Those who are looking for different places of interest inside Dhaka can visit Keraniganj in one day if they want (কেরানীগঞ্জের দর্শনীয় স্থান). You will see many attractive places at Keraniganj very close to Old Dhaka.

The various sights will captivate your mind. Rivers, boats, historic mosques, huge fields, and other open spaces are crowded with city dwellers. So go out to spend one afternoon in Keraniganj near Dhaka. It will be amazing to visit the Keraniganj now as it is an amazing city near Dhaka. The new good communication system will surely amaze you.

Keraniganj is a great place for a day tour around Dhaka. Apart from the mechanics of Dhaka city, one can visit Keraniganj for some natural touches. Beautiful surroundings surrounded by greenery, rivers, open spaces, Kashaban, and boat trips. An afternoon can be spent effortlessly in a secluded and quiet environment. Go to Keraniganj and get lost in nature. Those who live in Dhaka can choose Keraniganj for a day out near Dhaka.

The traditional Doleshwar Hanafia Jame Mosque is located in Keraniganj, Dhaka. The mosque, which is a marvel of ancient architectural style, has witnessed many histories and events over the centuries. Daroga Aminuddin Ahmed started the construction work in Bengali in 1275 (English 18687; Hijri 1285). That is why it was also known as the ‘Daroga Mosque’. His son Moiz Uddin Ahmed was the first Motwali of the mosque. The family of Khidir Box-Kader Box and Moiz Uddin’s family were engaged in the construction and renovation work of the mosque for generations. Former Member of Parliament Professor Hamidur Rahman, grandson of Quader Box, built the extension of the mosque along with the minaret in 1986. Incumbent Minister of State for Power, Energy and Mineral Resources Nasrul Hamid Bipu, son of Professor Hamidur Rahman, undertook extensive renovations of the mosque in keeping with the family tradition and intact the original infrastructure. It is a very sacred place to the locals. Besides, tourists from different parts of the country visit the mosque at least once when they visit Keraniganj. Architect Abu Saeed M. has done the work of rebuilding the 200-year-old mosque keeping the infrastructure intact. 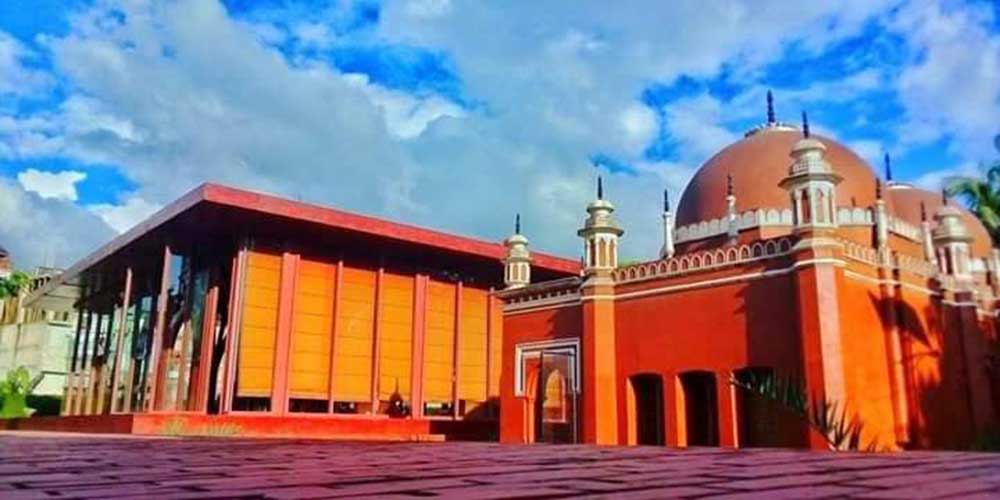 Mostafa Kamal Moinuddin, the head of Bangladesh Development Company Limited, is the initiator of this. It took about 2 years to build the mosque. The mosque has been built on half a bigha of land.

The mosque stands with its beauty in the open space around. However, the housing project has not yet developed such a settlement. So the number of worshipers in the mosque is much less.

However, many people came to see the aesthetics of the mosque. When the time comes, they perform the obligatory and supererogatory prayers. If you look around, you will see big grass and wide fields.

The brickfield can be seen in some distance. The workers came to this mosque to offer prayers. In the one-story mosque, about 600 people can pray together in the congregation.

According to the locals, about 5 crore taka has been spent to build the mosque. It has 3 main gates. There are 2 more doors on each side. Lots of windows have been built around it and light has been provided.

The spacious nature of the two-tiered window creates a wonderful atmosphere inside. The eyes are covered. The architect’s style of aesthetics is also reflected in the interior of the dome. There is also a daylight system. When the lights around the mosque are turned on in the evening, another aesthetic scene unfolds. Next to it, a separate building has been constructed for the imams and servants of the mosque. Hafeez Zahirul Islam, the caretaker of the mosque, said, “People come from far and wide to see the mosque. But before that, it was much more beautiful. The smoke from the brick kiln has destroyed the mosque and the flower trees around it. ‘

How to get to South Town?

From Gulistan, in Dhaka, you have to cross Babubazar Bridge and get on Dhaka-Mawa Highway. Then we have to go to Rajendrapur. The South Town project is on the right-hand side of the new jail in Rajendrapur. The mosque can be seen from a distance as soon as you enter the main gate of this housing project by walking for 8-10 minutes. You can also go by Postogola Bridge as well. It takes only 15 to 20 minutes from Postogola Bridge (Buriganga).

Shahrighat is a place behind the Bashundhara Riverview Project. Which is part of a canal flowing between Ainta and Arakul villages. There are rows of trees along the canal. This is why the place is better known as Sarighat. Dredging was done to increase the novelty of the canal and the sand of the river project was dumped towards the village of Arakul. Due to the canals and vegetation, the environment is very rural. Which will bring you a little peace of mind. If you go there, you will see rows of trees along the canal for about a kilometer. You will also find some temporary food stalls. In addition to Kashaban, you will find opportunities for kayaking and boat trips at Sarighat. Kayaking at the beginning of Sarighat will cost 150 Taka per person. There is a crowd in the afternoon, so if you want to do kayaking, take enough time. Also, if you rent a boat, you have to pay 100 Taka per hour. But you have to do it well beforehand.

Go to Hasnabad bus stand in Keraniganj from anywhere in Dhaka. Or go to the Keraniganj end of Postagola Bridge and take a rickshaw from the beginning of the bridge. You can reach Sarighat with a fare of 30 Taka. Can take 40 Taka on holidays. If the crowd is high, the rent may be higher. If you want to go to Kashaban, you can walk towards the end of Sarighat. And if you are in a hurry, you can cross by boat.

Jinjira or Zinzira Palace is a historical monument built during the Mughal period on the other side of the river Buriganga in Keraniganj Upazila of old Dhaka. Jajira is a corruption of the word jinjira meaning island. Jinjira Palace was built in 1620 AD as a recreation center by Subedar Ibrahim Khan II. The palace is named Jinjira or the palace of the island because the land of Jinjira is surrounded by water. 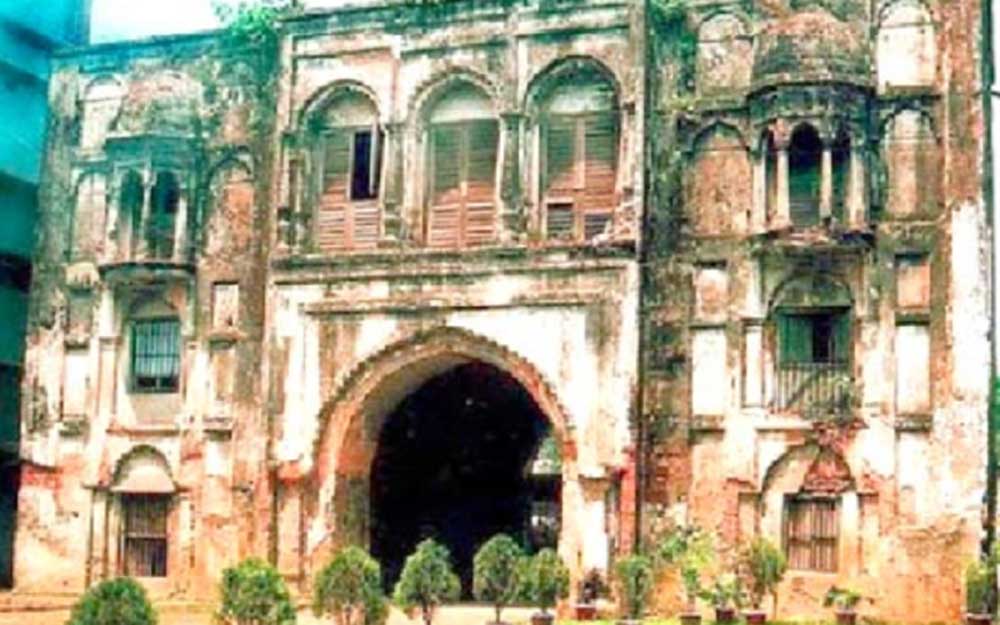 A wooden pool was used to get to and from the beautifully decorated Jinjira Palace, surrounded by the shade of native trees. It is said that after the defeat at the battle of Palashi, Sirajdaula’s family was sent to Jinjira Palace. According to the locals, a tunnel was made along the bottom of the Buriganga to connect the Jinjira Palace with the Lalbagh Fort, which was used by the Mughal army officers.

At present, the entrance gate of the Jinjira Palace, built in the style of a large caterpillar, and two palaces survive. The once lonely village has now become a crowded settlement. Buildings and many shops have sprung up around Jinjira Palace.

There are buses, trains, planes, launches, etc. from all the districts of Bangladesh to reach the capital Dhaka. After coming to Sadarghat from Gulistan in Dhaka, crossing the river Buriganga and reaching Bara Katra near Soarighat, Jinjira will look for the palace if he asks any local.

Buriganga, once a navigable river, was almost dead a few days ago. Buriganga, polluted by mismanagement and waste, was not valued as before. What’s in it? During the holidays in the busiest megacity, the city dwellers did not forget to address the banks of the Buriganga for entertainment. Because this time the water of the rainy river has become very clear and crystal clear. 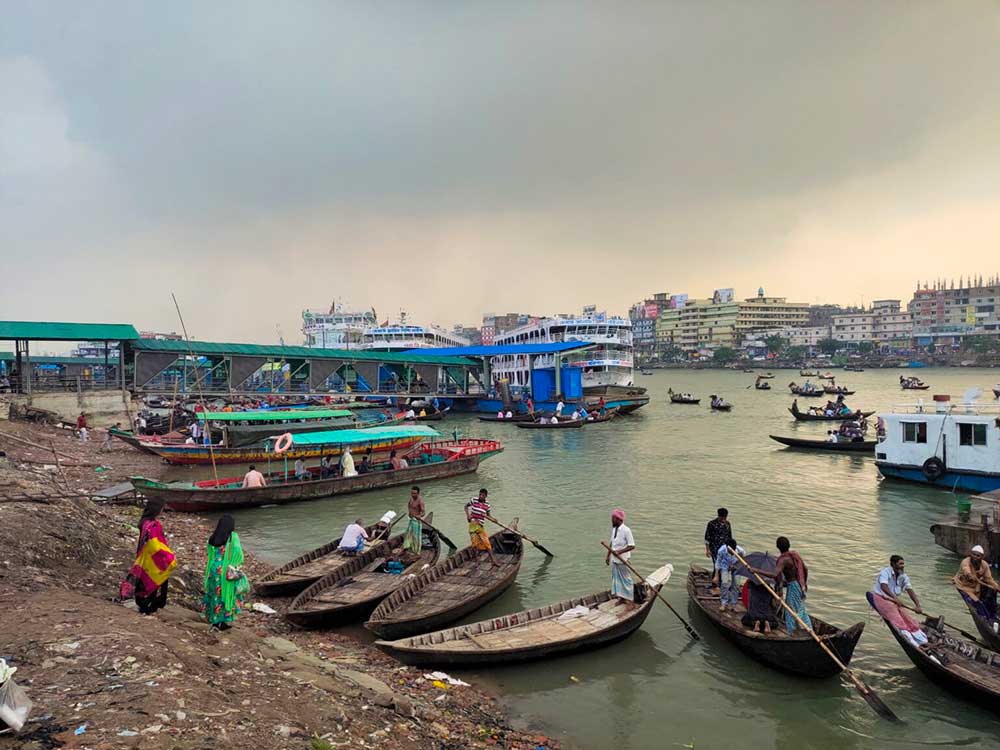 So on the holiday, thousands of entertaining people gather on the banks of Buriganga to enjoy the natural beauty of the evening with the breeze in the afternoon. Many have been seen cruising the river in small sailing boats with their relatives. In addition to the family trips of husband and wife and children, the banks of the Buriganga were abuzz with the presence of a large number of couples. For the people of Dhaka, this Buriganga is always a source of life.

Keraniganj (কেরানীগঞ্জের দর্শনীয় স্থান) is a perfect place for a group or family tour. The beauty of this place will give you awesome feelings. At the same time, you can come back within the daytime by visiting here. Hopefully, you can go to Keraniganj within a tight budget. If you want to travel Keraniganj with safety and want to enjoy the place with more joy, Travel Mate can help you with arranging the tour. Contact us for further details. Above all, you may add any missing information from the comment section. Happy Traveling. ♥