The most popular place in India for tourists is the Taj Mahal of Agra, the immortal creation of Emperor Shahjahan. When anyone visits India, but there is rarely found who has not visited the Taj Mahal.

Taj Mahal is a royal tomb of Agra in western Uttar Pradesh, India. Located on the southern bank of the river Jamuna on the eastern side of the city of Agra, this magnificent symbol of the world is widely regarded as one of the most widely admired works of world heritage. From the Islamic point of view, the Taj Mahal, a symbol of peace and beauty, is well-known as a symbol of love for the loving couple. Hence, many tourists come to visit the Taj Mahal and learn about the history of tourist attractions for ages.

History of the Taj Mahal

The Mughal emperor Shah Jahan built this magnificent mausoleum with the dedication of his second wife, Arjumand Banu Begum (who was better known as Mumtaj/Mumtaz). Mumtaz died while giving birth to her fourteenth daughter. After the death of Mumtaj, Emperor Shah Jahan was severely broken and so decided to build a Taj Mahal as a sign of love for his wife. The construction of the Taj Mahal began in 1632 and ended about 22 years later (1653). Although there were many controversies about the Taj Mahal’s construction craftsmen, it was originally built under the supervision of Ustad Ahmed Lahori, about 2,000 Persians, Ottoman Empires, and Europe’s expert designers and craftsmen that follows Persian and Mughal architecture. The Taj Mahal was listed as a World Heritage Site by UNESCO in 1983.

Attractive Things on the Taj Mahal

The entire Taj Mahal complex, which covers about 42 acres, is mainly divided into five sections – the main entrance, the garden, the mosque, the guest house and the mausoleum of the consecrated Empress Mamtaz.

The main courtyard of the Taj Mahal is surrounded by a fort from three sides. Outside the wall lies the tomb of Shahjahan’s other wives and dear servants of Mamtaz. All the walls have a domed architecture, which is now used as a museum. The main entrance to the Taj Mahal of Mughal architecture and design is made of marble. There are two red mosques and Mughal guest houses in the main square.

In the front of the Taj Mahal, there is a “Beautiful Garden”. It is known as the Garden of Heaven. There are 16 separate flower gardens, a walkway surrounded by trees and some beautiful fountains with high walls. In the middle part of the tomb and the main gate is a marble stone square with water reflecting the whole Taj Mahal. 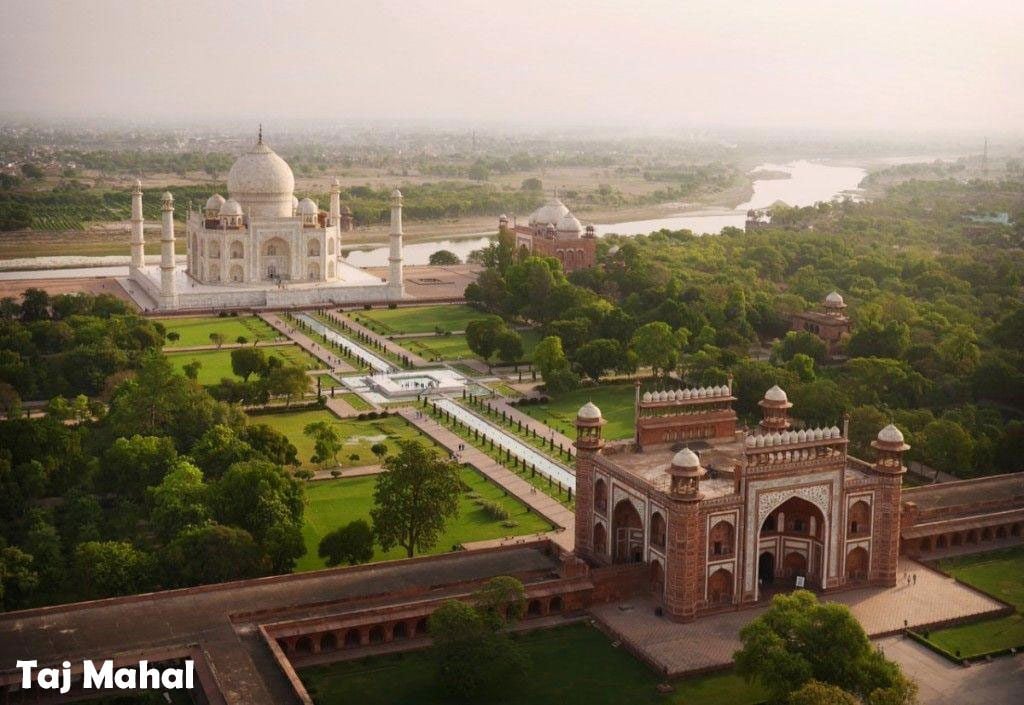 The inner courtyard— inside the tomb is decorated with octagonal-looking half-round marble stones. Here is the tomb of Emperor Shajahan and his wife, Mamtaz. Although these are just dummy tombs covered with a fine wire-crafted marble screen. Their actual tomb is featured in sculptured inscriptions 80 feet below the dummy tomb ground. When the moonlight is reflected on the tomb during the full moon, an inhospitable atmosphere is created around it.

Inside the Taj Mahal complex, the verses of the Holy Qur’an are beautifully explored in geometric and floral motifs on the precious stones using the Pietra Dura technique.

Conveniently, the last time Emperor Shah Jahan wanted to build another Taj Mahal on the banks of the river Jamuna, now known as “Kala Taj Mahal”. From here, with the light of the sun and moon, we can see the different forms of the Taj Mahal. Made of black marble, this castle is connected to the Taj Mahal through the bridge.

Agra Fort is located 1 mile to the right of the river Jamuna, which, although the stronghold of the army during the Mughal period, was later known as the residence of the royal family along with the ruler of Shah Jahan.

How To Go To Agra From Bangladesh To Watch The Beauty Of Taj Mahal:

You can go to Delhi by bus, train or plane. How you go from Dhaka Bangladesh will depend on your choice and budget.

There are flights from Bangladesh directly to Delhi. SpiceJet, IndiGo, Biman Bangladesh, Air India airlines operate flights from Dhaka to Delhi directly or Dhaka to Kolkata to Delhi. On a non-stop flight, it will take about 2 hours and 30 minutes to reach Dhaka. And once Kolkata stops, there are different times on each flight. Usually, it takes a minimum of 5 hours to 14 hours.

Where Will You Stay:

Taj Mahal is a perfect place for a group or family tour. The beauty of this place will give you awesome feelings. At the same time, you can come back within two or three days by visiting here. Hopefully, you can go to the Taj Mahal within a tight budget. If you want to travel Taj Mahal with safety and want to enjoy the place with more joy, Travel Mate can help you with arranging the tour. Contact us for further details. Above all, you may add any missing information from the comment section. Happy Traveling. ♥