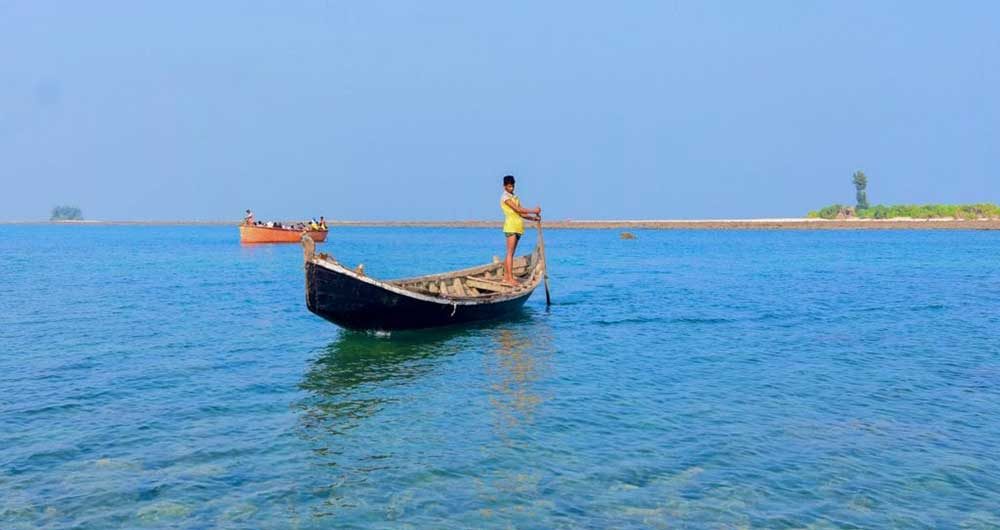 Chhera Dwip is the southernmost territory of Bangladesh. This Coral Island has located about 5 km to the south of St. Martin. The island is known to people of the area by the name of Chheradia as well as Siradia. Chhera Island is full of natural corals, natural rocks as well as coconuts. At high tide, a third area of the Island gets submerged. As the blue sea waves hit the rocks, an amazing scene unfolds.

Every year, thousands of visitors come to Chhera Island to take in the blue sky, blue sea, and sunset. The moonlight at Chhera Island creates a magical attraction. Many people choose to camp on the beautiful island at dark night with a full moon.

How to go to Chhera Island

In the direction of Dhaka to Teknaf, if you wish to visit Chhera Island, you have first arrived at Teknaf first. Teknaf is accessible directly with a variety of buses departing from Dhaka. To get to Teknaf via Dahaka Fakirapul, Abdullahpur, Gabtali, and Sayedabad buses, you can choose St. Martin’s Transport, Shyamoli, Eagle, Modern Line, Green Line, S. Alam, etc. Based on the nature of the bus fare typically, the cost is between BDT 1050 and 1050 to 2500 Tk. It takes between 10 and 12 hours to arrive at Teknaf.

Trains to Dhaka up to Cox’s Bazar: You can travel from Dhaka to Chittagong via train at Sonar Bangla, Turna-Nishitha, Suborn Express, Mahanagar Prabhati or Godhuli, Chattala Mail. After that, you can take the Cox’s Bazar car at Bahaddar Hat or the New Bridge region of Chittagong. It is possible to travel by bus from S Alam, Saudia, Unique and so on for better service.

Teknaf to St. Martin: Ships such as Kutubdia, Kerry Sindabad, Eagle, Sundarbans, etc. are able to depart between Teknaf from Teknaf to St. Martin every morning. There are also speedboats and trawlers that travel the sea route. It can take between 2 1/2 hours to travel by vessel between Teknaf up to St. Martin. The cost for the up-down journey is around 600-550 Taka, dependent on the class of the vessel. Ships depart every day from the jetty to St. Martin’s between 9 am between 10 am and 3 pm and return from St.Martin around 3.00-3.30 pm. So, if you don’t arrive early at the jetty increases the chance of missing the boat. Then, those who spend their night at St. Martin get a possibility of returning the following day aboard a vessel that is mentioned within the itinerary.

The ship typically sails during the five months of November through March. Therefore, if you visit St. Martin at other times of the year, you will need to hire either a speedboat or trawler. In the rest of the year with the exception of winter, the sea can be rough and trawlers or speedboat cruises aren’t secure at this point. If you’re an adventurous person, you could enjoy a trip by using a trawler on the high seas.

In addition to three or two tea shops, dabs and watermelons, there’s nothing else to be found on Chhera Island. If you wish to eat something on the island you must bring food items. You could also return to St. Martin and eat.

Coral, Sundari Poya, Hilsa, Rupchanda, Lobster, Kalachanda, etc. can be enjoyed in St. Martin’s. Some of the most popular restaurants that are located in St. Martin are Carey Marjan Restaurant, Beach Point, Hotel Allah Dan, Bazar Beach, Assam Hotel, Sea Beach, St. Martin’s, Comilla Restaurant, Real Restaurant, Haji Selim Park, St. Martin’s Tourist Park, Hotel Sadeq and many more. But before you eat it is important to be sure of the quality and the cost of the food.

Where can I stay