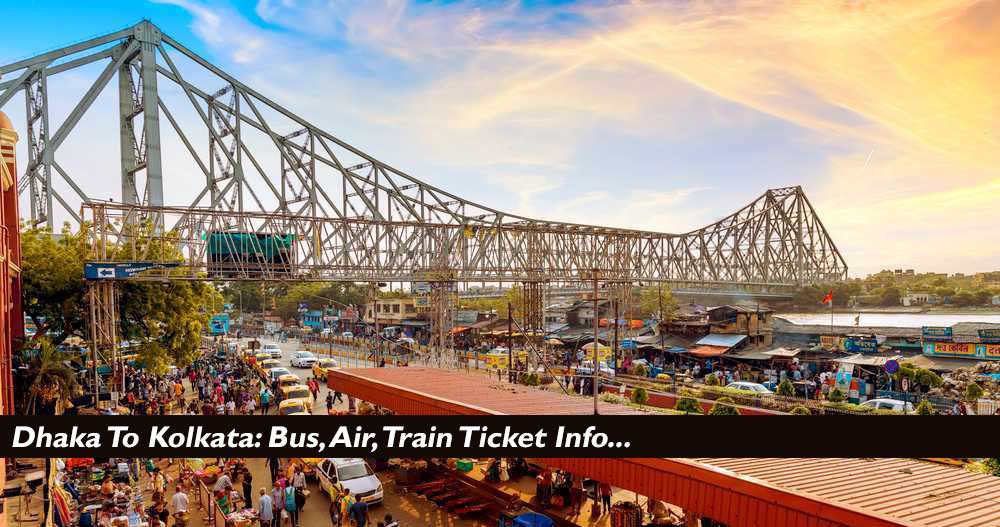 Dhaka to Kolkata (By Air)

In the shortest time from Bangladesh to Kolkata, you have to go by plane to get there easily and comfortably. Various flights depart daily from Dhaka’s Shahjalal Airport to Kolkata’s Netaji Subhash Chandra International Airport. Bangladesh Biman, Indigo, SpiceJet, Air India, and NovoAir are notable for flying to Kolkata.

Dhaka to Kolkata Fares: Air India and SpiceJet flights from Bangladesh to Kolkata at a low cost. Air tickets cost between Rs 4,500 and Rs 7,800 depending on the airline. It takes about 1 hour to fly from Dhaka to Kolkata.

Dhaka to Kolkata (By Train)

A joint venture between Bangladesh and India will be able to travel directly to Kolkata by Maitri Express train. The Maitri Express leaves Dhaka Cantonment Station for Kolkata on Friday, Saturday, Sunday, and Wednesday at 8.15 am. This train passes through the Darshana border and goes to Chitpur station in Kolkata. It takes about 9-13 hours to travel from Dhaka to Kolkata. The fare for AC seats including travel tax is Rs. 3,400 per person and Rs. 2,500 per person for AC chairs. However, the rent for children below 5 years is half.

When does the train leave Dhaka?

Can I buy a train return ticket?

Yes you can, but you can buy Kolkata to Dhaka train ticket from Kamalapur railway station, but you can pay a 20% ticket from Dhaka if you are lucky you will get it or not. The remaining 80% of tickets are paid from the Kolkata counter.

How many kg can you take?

What is the charge for overweight (30 kg)?

When will the train arrive from Dhaka to Kolkata?

The train will leave Dhaka Cantonment Station at 7:10 am and reach Kolkata at 7 pm, but sometimes it may be late and it may be 9 pm.

When will the train reach Kolkata from Kolkata?

Departs from Kolkata at 8:10 am and arrives in Dhaka a little before 6 pm if it is not late and if it is late it may be till 8/9 pm.

How long does it take to get to or from the train?

The total travel time is 11 hours, but in case of occasional delays, the height may not be more than 13 hours. Total Dhaka to Kolkata 400 km. The path is to go. And the speed of the train is 40/42 km. Per hour

Dhaka to Kolkata (By Bus)

In the case of buses, Shyamoli, BRTC Scania, Green Line, Desh Travels, Sohag, Souhardya, and Royal Coach will be able to travel from Dhaka to Kolkata by bus. The service of BRTC, Sohag, Shyamoli, and Green Line is good among these buses. However, only the Shyamoli Paribahan NR bus goes directly to Kolkata. If you want to go from Dhaka to Kolkata by all other transport buses, you have to come to Benapole, cross the border and reach the Indian part and take another bus. It takes about 4 hours to reach Kolkata via Petrapole.

Arriving at Benapole, it will cost 20-30 Taka to go to Benapole Immigration from Benapole station. Then you have to cross the border at Benapole and go to Haridaspur Indian Immigration Department by auto for 30-40 Taka. Once the immigration is over, you have to go to Bangaon railway station at Rs. 25-30 per share in auto. Then buy a local train ticket from Bangaon station for 20-30 Taka per person and go to Sealdah station or from Bangaon to Dumdum station. The fare from Sealdah or Dum Dum station to Metro Rail Esplanade (Kolkata New Market Stoppage) or Park Street is Rs.

It will take about 2 hours to reach Kolkata by train from Bangaon. All in all, it will cost 700-850 Taka to travel from Dhaka to Kolkata at a low cost. Besides, if you want, you can go to Kolkata by non-AC / AC for 150-260 Taka without going by train after immigration. However, going by bus will take much more time than by train. From about 4 to 4.30 p.m.

Tips when going from Dhaka to Kolkata

If you need support for traveling in India, you can call Travel Mate. You can also read Darjeeling, Taj Mahal, and Sikkim tour experiences too.

Previous postTravel Bholaganj Sada Pathor – Sylhet (Cost, Living, Others)
Next postHow to get Schengen Visa from Bangladesh within 7 days without any hassle!

Abir
Reply
Its great helpful thanks