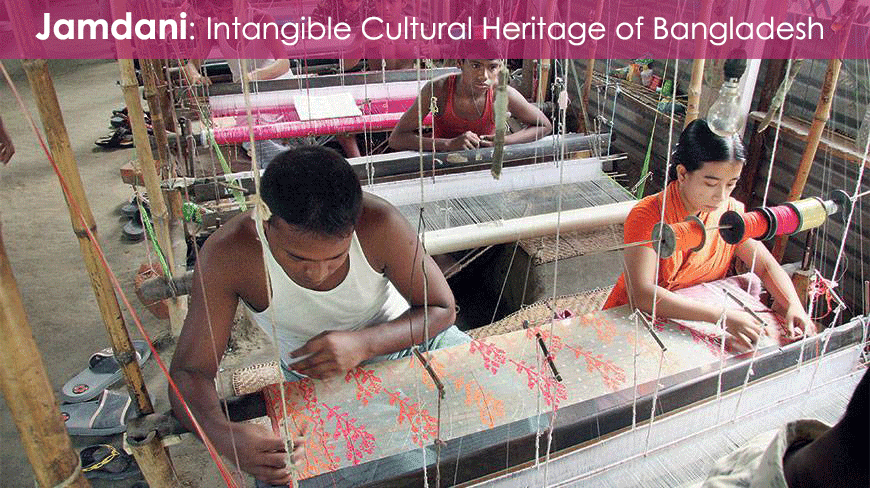 The successor of muslin textile knocks the name of Jamdani first. The Saree lovers call it with admiring Madhabi, Malancha, Mala or Jui Phool, Terehya, HazaraButi, Chida. In the first place, the woven fabric in cotton which figured or flowered blows the mind of the Saree lovers. The history of Jamdani bears the geometric or floral designs in the Dhaka region over the centuries. Must be remembered, the dresses including Khrta and Sherwani which were made with Jamdani Fabric were very popular in the 17th century as well as Mughal region. To point out, UNESCO declared the traditional art of Jamdani as the Intangible Cultural Heritage of Humanity and it received geographical indication (GI) status. The villagers of Noapara, Ruposhi, Mikuli, Khadun, Pabanakul, Murgakul, Darab at the east bank of Shitalakshya is working hard day and night to weave Jamdani. Maybe, the environment and the weavers of South Rupshi of Narayanganj district is suitable for knitting it. The elegance of Jamdani lies in its design. You can’t imagine the design is full of fine and tangled craftsmanship. Important to realize, the demand of Jamdani depends on its flashy crafts and designs. Notably, with the special combination of cotton and gold thread is defined to weave Jamdani.

The main point of Jamdani is Rupganj and Noapara which is at the side of the Shitalakshya River. It is thought that one day it was also the part of Sonargaon. Hopefully, from the last decade in the Faridpur and Bhairab district is also sewing the Jamdani. If we see the stats of Bengal Govt. from 1907 to 1908 we get that then the Dhamrai and some of the part of Dhaka city weave the Jamdani. We get a lot of story of Nawab for loving Jamdani as well.

The (Design) History of Jamdani:

Researchers express the different opinion for the varieties creative design of Jamdani cloth. According to some them, the design of Jamdani has the effect of carpets and folk designs of Iran, Iraq, and Turkish. As a matter of argument, it was explained that Mughal emperors were fond of Persian cultural way. They brought Many Iranian artisans and craftsmen several times in Indian subcontinent. Not only that, in different aspects, they sponsored  Persian culture only for the love of their hard work and creativity. In this case, it may have been introduced the Iranian, Iraqi or Turkish designs of Jamdani.

On the other hand, according to some of the researchers, the design of Jamdani is purely the creativity and creation of Bengal weavers. As a reason, they mentioned that Jamdani’s design has the priority of Bangladesh’s environment, nature, living organisms, and tree design. Their commentary, a Jamdani-weaver emerge in his design which he has watched in the surroundings. Then Again, in particular, many of them get similarity with the design of the Chakma people in Jamdani. Following the different doctrine, Mohammad Saidur, the author of “Jamdani” book expresses that Jamdani design did not originate from the influence of the country itself, rather, it came in the time of various tribal influences, Hindu-Buddhist influence, Muslim influence, British influence, Pakistanis and now Bangladeshi influence. So it is a mixed form of various effects and according to the tradition, these effects have been combined together in the traditional jamdani design. It should be noted that, during the Sultanate and Mughal period, this industry received special patronage from the Muslim rulers. For this reason, it is not unusual to stay the effect of  Persian. Surely, it is assumed that with the passes of time, the design has been localized. Now in the twenty-first century, Jamdani’s design has emerged flowing through a long-term transformation process. The evolution of Jamdani Design:

When comes about the design of the Jamdani, we can imagine across the saree with colorful flowers and geometric mold. Surprisingly, the colorful Jamdani design is only about a hundred years old. Though researchers always tell Jamdani is the infatuation’s form of muslins. Therefore, it is possible to think that the original design of Jamdani was made with white yarn above white cotton. However, it can be said that a very small amount of color yarn is also used.

If we search any eyewitness about the evolution of Jamdani’s design, we find Hakim Habibur Rahman (1881-1947). He has said, from our childhood, the best form of Jamdani was the white-colored Jamdani named as Ashrafi Boti, Matsubuti,  Jalidar, and Laharia and this is the ancient trend. However, Hakim Habibur Rahman also said that the introduction of black and red booty on the sari begins in his childhood. In 1945, he said, “50 years ago, Jamdani was made only by the white, but the work of red-black in saree’s lace was fine from the fine, the texture was white, and that was the original style. George W. and Percy Brown gave similar information about the evolution of Jamdani design. Then the design of Jamdani began to change with the passes of time. According to Hakim Habibur Rahman, this change was associated with the Nawab Sir Salimullah (1871-1915). ‘… First of all, he inspired to use different colors and flowers with different designs with different types of color. That is to say, he started using colorful Jamdani for the first time. He works for designing Large flora in the flower and at the end of his life, he passes a large part of the time developing such a design. Surely, this Jamdani was very expensive. The wealthy and noble people of Bengal started using it and the use of white Jamdani was almost wiped out. That is to say, Nawab Sir Salimullah patronized and started to be made colorful Jamdani in the last decade of the nineteenth century or at the beginning of the twentieth century. At the same time, it started to become popular. It is interesting to know that when Nawab was at the end of his life, he was a full designer of Jamdani. According to Hakim Habibur Rahman, the time of Nawab Sir Salimullah is the golden age of the colorful design of the Jamdani cloth.  Then all the design including the flowers, birds, spinach in Jamdani was colorful.

Originally, The design of Jamdani is divided into two parts – Border (Paar) and texture (Jomin). There are different names in the design of the border and texture. In general, the Jamdani dress, especially the saree is named with the name of the border. Such as KalkaPar saree, MulanchaPar saree ETC. To design a Jamdani sari, the design of the shores or border works as the main foundation. The design is usually made of different types of spinach, flowers, and animals. The designer adorns the border with a motif. The complete designs of the border depend on this motif. At the side of this motif, there are several similar small designs/graphs. With the combination of these designs, the cloth gets fulfillment. When pride or nobility of Jamdani describes that is in his design. It becomes most expensive when the design is most dense, heavy and unique. This simple equation did not break even today. No matter how complex the design is, the Jamdani weavers adapted the outside lines of design to their handloom straight line and parallel skill.

Surprisingly, what Jamdani artisans see around of them can illustrate with the design in Jamdani. For example, Ashfulpar, Jhumkapar, Armorer Mouarpar, Nishanpar, Puilatapar, Supeeri Tangkipar, etc. ‘Ashful’ is basically the shape of a flower-shaped head of two swans (In Rupganj, Ash has been pronounced as duck locally). JumkaPar is a portrait of a particular earrings design. Armorer Mouarpar is the mango crown. Nishan is a three-pronged flag. Puilatapar is the tip of the herb. Supeeri Tangkipar is a beta cheeker. In this way, various things around weavers are seen in the Jamdani design. These designs are reddish, blue, black, violet, green and white, and pleasant colors have made Jamdani imaginative and royal.

The special quality of the Jamdani weavers is the ability to adapt themselves to complex and unique designs. It is necessary to say, the weavers of recent times have the weakness of this special quality. The main reason for this drawback, huge corporate capital has now entered into the development of Jamdani’s design. The city-based designers are designing Jamdani for the orders of various big organizations! Those designs are going away in the Mohajon’s (The moneylender) ‘Bangla’ (Local the factory is mentioned as Bangla in Bengali). The craftsmen are just shedding those designs in the weaving machine. The craftsmen do not feel the need for innovating new designs as like before. The ‘urban design’ does not come to those who are not associated with the ‘Bangla’ of Mohajon. But they are also doing ‘copy paste’. Otherwise, they are running old designs by changing a little bit. Most of them are not interested in creating any new designs. But yes, some of the big corporate houses have a great collection of old designs. From those old designs, the designers are now making new designs for Jamdani. In the positive side, it needs to say, the new design is not invented, but the weavers or craftsmen have not yet stepped away from the creativity of knitting. For this reason, the 100% Hand-woven Jamdani design is still royal, and elite.